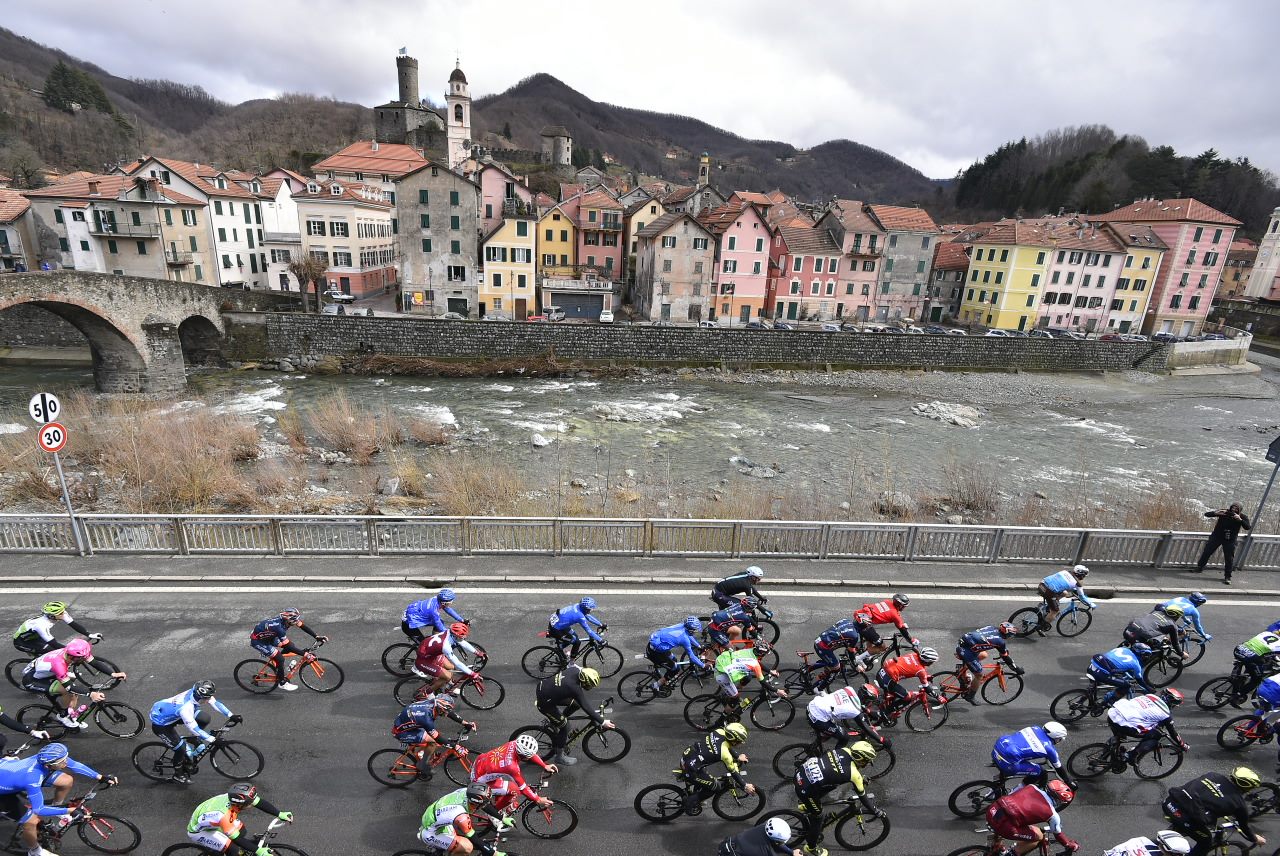 Vincenzo Nibali claimed this year’s edition of Milan-San Remo today, after attacking on the final climb of the Poggio with 6 kilometers remaining.

After commencing his winning move, Nibali quickly opened up a slight gap of eight-seconds after cresting the top of the Poggio, which the Italian rider continued to increase along the descent that proved insurmountable for the chase, later crossing the finish on the Via Roma with his arms extended in the air in celebration.

In the meantime, Mitchelton-Scott’s Caleb Ewan took the sprint for second place, while FDJ’s Arnaud Démare secured the final spot on the podium.

The 109th edition of Milan-San Remo got off to a wet start today, as peloton was forced to endure rain and cold conditions.

After numerous attempts at establishing a breakaway, a group of nine riders finally managed to ride clear.

From there, the escapees succeeded in forging an advantage of around five and a half minutes with 115 kilometers still left.

Back in the peloton, Team Sky tried in earnest to control the gap, in hopes of keeping last year’s winner Michal Kwiatkowski in contention, while race favorite Peter Sagan (Bora-Hansgrohe) appeared to look comfortably positioned in the middle of the pack.

As the race made its way south along the Ligurian Coast, the rain finally subsided giving way to the sun, as numerous riders began peeling away their rain capes and overshoes.

With around 45 kilometers to go, a nervousness reverberated through the peloton creating an occasional crash, claiming riders like Dan McLay of EF-Education and teammate Simon Clarke both of whom hit the tarmac hard.

However, it wasn’t long before a determined peloton eventually reined in the breakaway group, who were all swallowed up with 30 kilometers remaining.

This was followed by the climb of the Cipressa, which saw most of the big name sprinters active in the main bunch, including Mark Cavendish, Caleb Ewan, Marcel Kittel, Arnaud Démare, André Greipel and Alexander Kristoff.

Kittel was the first to capitulate, quickly dropping out the back of the group, while the rest of the favorites managed to stay with the main pack over the summit of the Cipressa, despite an attempt by Team Sky to blow the race apart with an injection of pace.

From there, FDJ lead the peloton down the descent of the Cipressa, looking after team leader and former race winner, Démare.

The final obstacle of the race was the Poggio, a short 3.7 kilometer climb with a maximum gradient of 9%.

At just 9 kilometers from the finish line, the Poggio is a last chance for teams without a pure sprinter to attack for the victory.

When the peloton arrived at the base of the Poggio, it was led by Quick-Step Floors and the Bahrain Merida team of Vincenzo Nibali.

As the peloton made its way around a roundabout, Cavendish took a spectacular fall after hitting a bollard in the middle of the road, which saw the British rider take a full somersault and crash out of the race.

As the Poggio kicked-up, the attacks began to get underway, with BMC’s Jempy Drucker the first to strike out, who was quickly caught and passed by Vincenzo Nibali, who went on to crest the summit alone.

With around 5 kilometers, Nibali descended with his usual abandon, as he continued to extend his lead.

Back in the main group, Matteo Trentin (Mitchelton-Scott) took up the chase effort, who’s move was closely marked by Sagan, Kwiatkowski and Michael Matthews of Team Sunweb.

Nibali proceeded to pass under the flamme rouge, while the peloton continued to close the gap.

However, the Bahrain-Merida rider managed to remain outside of their grasp and seize the race honors.

Nibali’s victory gives Italy its first winner of La Primavera in over a decade.