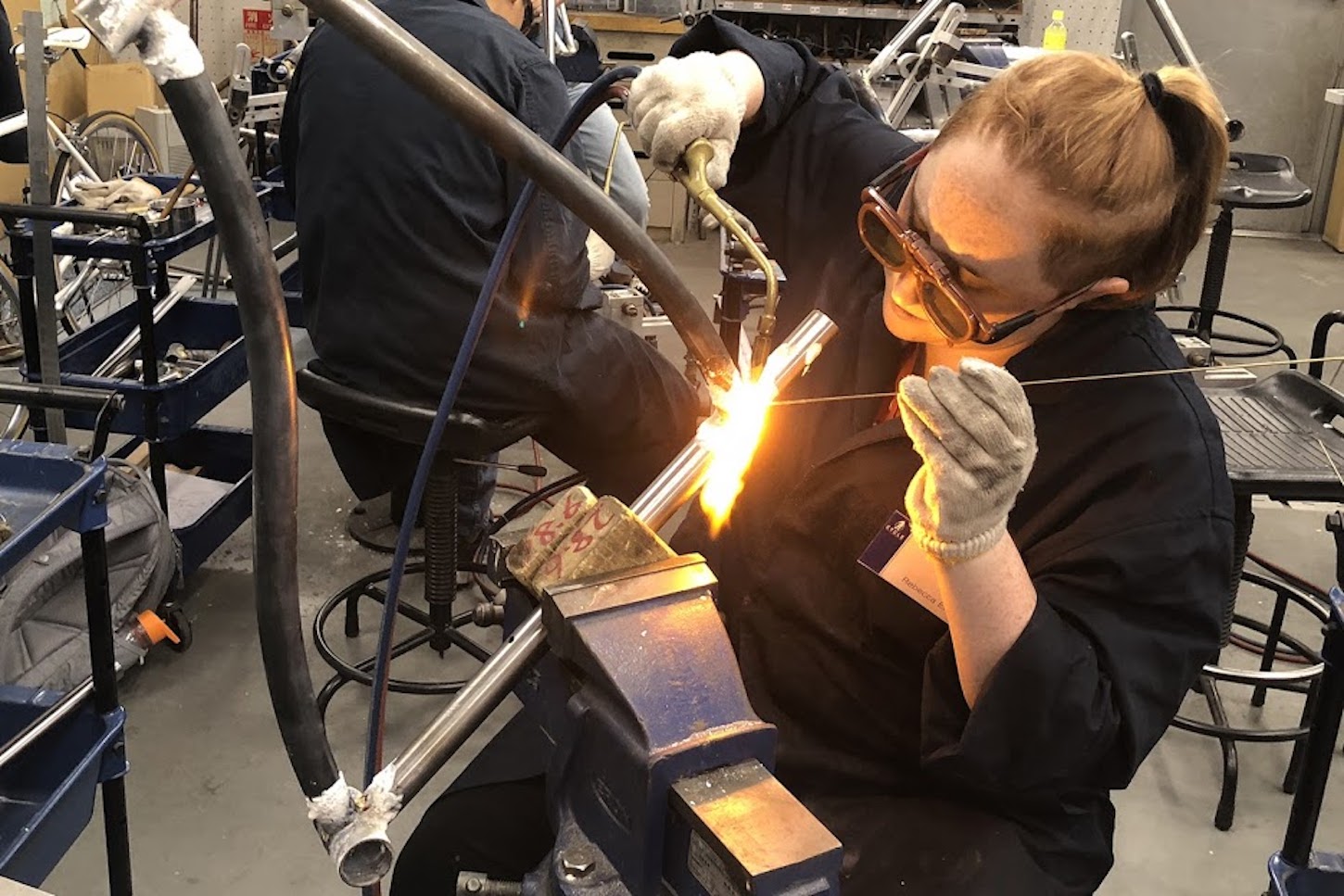 Students in a three-week summer bike-building class in Tokyo absorbed contemporary Japanese culture and design aesthetics while honing their skills as makers. Offered under the auspices of the Rhode Island School of Design’s Tokyo Bike Building program, cycling enthusiasts were given the opportunity to study traditional steel framebuilding techniques with master craftsmen at the Tokyo College of Cycle Design (TCD).

“Designing and building a bike frame in 15 days is intense,” says Associate Professor of Industrial Design Khipra Nichols, who developed and led the course. “But the larger goal of the class is to show students what makes Japan so culturally unique and to help them build a design practice that taps into their personal insights and intuition.”

Many of the students who participated are Industrial Design majors used to responding to an assigned design problem by creating a series of prototypes or 3D models without necessarily building the final product. As Nichols points out, the bike-building class—with its focus on craft and precision—complements RISD’s on-campus curriculum beautifully.

Before even beginning their “apprenticeships” at TCD—in the heart of Tokyo’s Shibuya district—students toured the nearby city of Kamakura, home to the 13th-century Buddhist temple Kōtoku-in, and dined at the world-famous Muji Café in Yurakucho. “We were lucky enough to have ID faculty member Ayako Takase as our guide,” says Nichols.

As a longtime advocate and practitioner of meditation, Nichols frequently leads students in guided meditations as well as crafting assignments to help them access subconscious insights and inspirations. For example, he asked the summer bike builders to keep a daily journal while in Japan, beginning each day with a question, adding an image and then writing down reflections about whatever new concepts or connections they discovered by the end of the day. “Doing that on a regular basis helps you notice your surroundings more acutely and learn to trust your own insights and observations,” says Nichols.

For example, graduate student Rebecca Erde noticed that there are fewer trash cans in Tokyo than she’s used to here in the US. “You become more mindful of the trash you create each day if you have to carry it around for a couple of hours,” she explains. She also notes that she was blown away by both the skill of Professor Shinichi Konnoand the other TCD instructors and their openness to new ideas. “We came in with some really wacky designs,” she says, “but by the end of the class, they all said that we inspired them to think differently and be more creative in their own designs.”

After completing her own bicycle frame at TCD, Erde displayed her work at this month’s New England Builders’ Ball (NEBB) in Boston, along with several other students. “We’re also planning to show this year’s Mars Rover vehicle,” Nichols notes. Designed and built by ID students for the annual NASA Human Exploration Rover Challenge in early May, the cycle is “always a crowd-pleaser at the RISD booth.”

*reprinted with permission from the Rhode School of Design