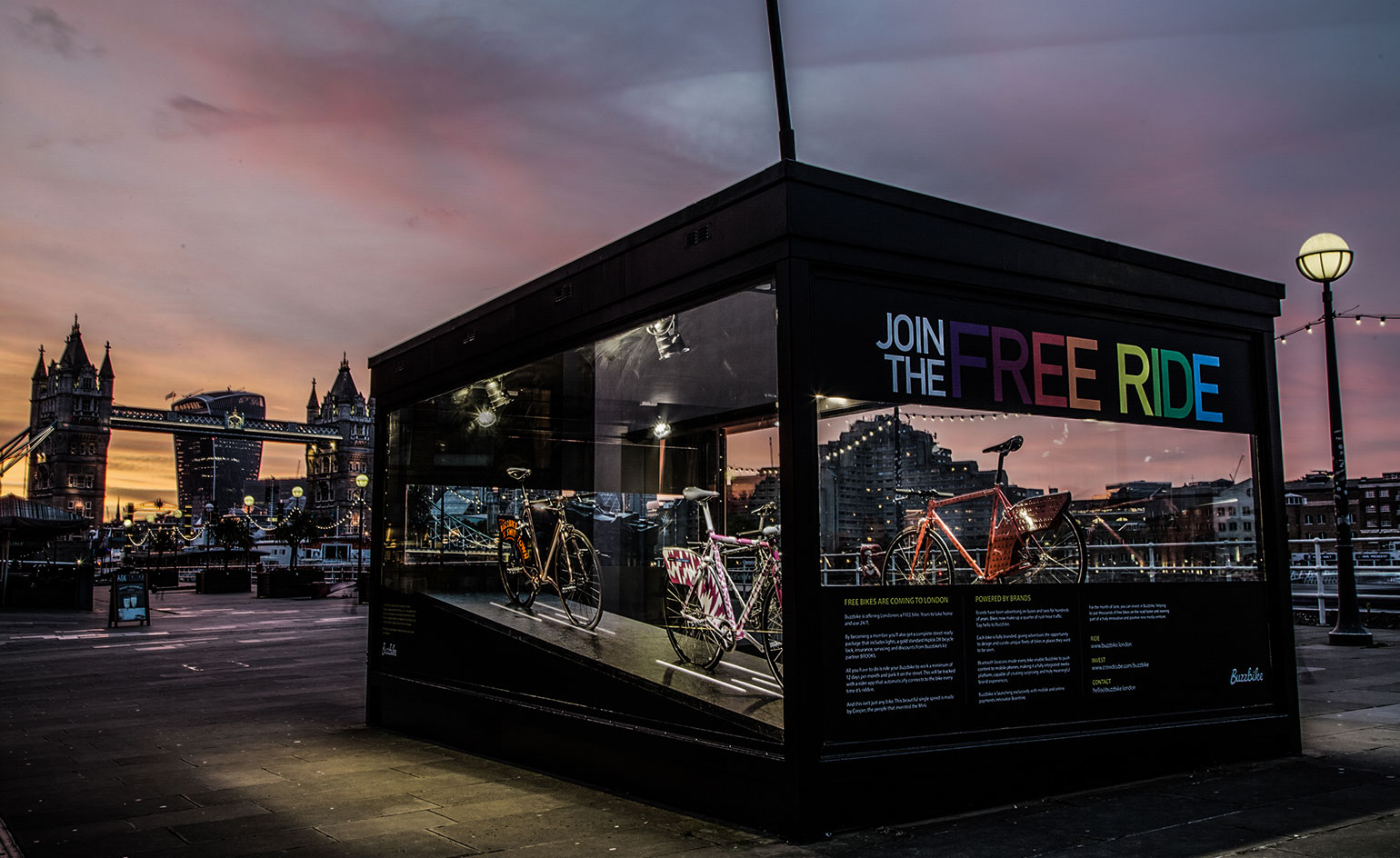 A new bicycle scheme in London called Buzzbike, is looking to disrupt the world of advertising by offering free bikes to cyclists which bear the advertisements of paying sponsors.

Launched at the Design Museum in London yesterday, the innovative business hopes to break the mold of current ‘pay-as-you-go’ bicycle schemes, by offering cyclists in London a free bike.

Buzzbike’s single speed bike is made by Cooper, the same engineers behind the iconic MINI, with many of them being treated to the decorative flair of UK graphic designers Eley Kishimoto, Universal Everything, Smithtown and illustrator Jean Jullien.

The scheme provides members with free bike, along with the necessary accouterments such as lights, a bike lock and even insurance – all for the small deposit of £100.

All that’s required, is for members to ride their bike a minimum of 12 days a month and park it on the street, during which time, their commutes will be tracked through a phone app that automatically connects them with their Buzzbike.

Buzzbike co-founder Tom Hares says: “Brands have been advertising on commuter transport for hundreds of years. Given the growth in cycling and the culture that surrounds it, bikes felt like a natural progression.

“The technology we’ve developed allows brands to create surprising and fully integrated brand experiences, whilst providing Londoners with a completely free way to get around the city.”

Hmm.. Buzz bike almost sounds like a deal that’s too-good to be true, which gives rise to the question, how is it financially viable for the company?

According to Buzzbike, their goal is to establish a creative advertising platform for brands, powered by cyclists. To wit:

‘Your bike parked on the streets of central London gives brands unique exposure in places it’s hard to be seen, while doing something good for the city,’ explains the company.

That’s not to say that members get a completely free bike.

Indeed, they’re encouraged to participate in events and social media campaigns, thereby creating what Buzzbike says, “is an active community of brand ambassadors”.

Buzzbike is offering Londoners a FREE bike. Yours to take home and use 24/7. By becoming a member you’ll also get a complete street-ready package that includes lights, a gold standard Hiplok DX bicycle lock, insurance, servicing and discounts from Buzzbike’s kit partner BROOKS. All you have to do is ride your Buzzbike to work a minimum of 12 days per month and park it on the street. This is tracked with a rider app that automatically connects to the bike every time it’s ridden. And this isn’t just any bike. This beautiful single speed is made by Cooper, the people that invented the Mini.

Powered by brands. Brands have been advertising on buses and taxis for hundreds of years. Bikes now make up a quarter of rush hour traffic, so why not bikes? Each bike is fully branded, giving advertisers the opportunity to design and curate unique fleets of bikes in places they want to be seen. Bluetooth beacons inside every bike enable Buzzbike to push content to mobile phones, making it a fully integrated media platform, capable of creating surprising and truly meaningful brand experiences.

A creative platform. To illustrate the creative potential and impact for brands, Buzzbike collaborated with four of the country’s most talented artists, illustrators and designers to create an exhibit for the Design Museum. Each was given an open brief to do their thing on a Buzzbike, resulting in an explosion of iconic fashion prints, cheeky illustrations, copper and secret luminous messages.