CapoVelo.com
CapoVelo.com - - New Book Introduction: "Spitting in the Soup: Inside the Dirty Game of Doping in Sports"
32345
post-template-default,single,single-post,postid-32345,single-format-standard,no_animation

New Book Introduction: “Spitting in the Soup: Inside the Dirty Game of Doping in Sports” 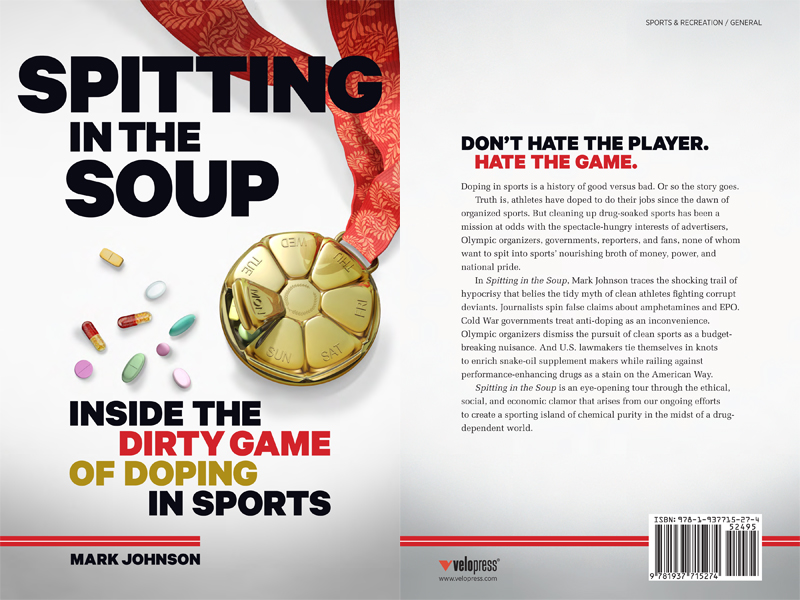 In Spitting in the Soup, sports journalist Mark Johnson explores how the deals made behind closed doors keep drugs in sports. Johnson unwinds the doping culture from the early days, when pills meant progress, and uncovers the complex relationships that underlie elite sports culture. Spitting in the Soup offers a bitingly honest, clear-eyed look at why that’s so, and what it will take to kick pills out of the locker room once and for all.

The story of doping in sports is packaged for easy consumption. As it goes, morally degenerate athletes cheat to win. Get rid of these creeps and sport settles back into a state of pure fair play. The falls of cheaters like Lance Armstrong, Ben Johnson, and Barry Bonds are object lessons topped with gratifying dollops of schadenfreude. The very presence of such deviants in elite competition is an affront to the rest of us who don’t take shortcuts, and their collapse pleases us by confirming our own moral superiority.

But this tidy primary school version of events is itself a fraud. Like viewing the Grand Canyon through a toilet-paper tube, its good-versus-evil reductionism leaves out layers of historical context and economic sedimentation—most glaringly by ignoring the fact that drug-free play is a relatively recent moral precept forced upon sports whose participants have always been chemically enhanced. While every doping athlete is responsible for his or her own decisions, the story of doping in sports is more complex than solo agents cheating their way to the podium. In fact, the imposition of quasi-religious values regarding personal and moral cleanliness is a relatively new invention that elite sports are still struggling to adopt. This book attempts to unpack some of the com­plexity that gets lost when a sportswriter has to meet the constraints of space and deadlines, or when a politician needs to appeal to the fearful instincts of his constituents.

Maintaining a good-versus-evil understanding of doping in sport allows us to turn our heads from our own role as members of a soci­ety that embraces performance-enhancing drugs and procedures. As I explore in this book, fans, athletes, governments, sports organizing bod­ies, and advertisers are all complicit in the championing of chemistry in the service of greater happiness and performance in life.

This context matters when considering doping in sports. The use of performance-enhancing drugs ultimately comes down to individual decisions, but to understand those choices, it helps to take into account contemporary society’s gargantuan thirst for performance-enhancing drugs and procedures, as well as nearly 150 years of organized sports history—during two-thirds of which doping was not contrary to what we now call the spirit of sport.

Of course, when we dope in the course of our daily lives, we are (usu­ally) not breaking any rules. Taking erythropoietin (EPO) to get ahead in a bike race is illegal, but popping a prescribed amphetamine like Adder­all to improve focus and stamina in school or the workplace violates no regulations. Nor does taking Viagra to improve sexual performance. American society has repeatedly stated—via its embrace of direct-to-consumer drug pitches on television and its hands-off approach to a supplement industry that does over $30 billion in annual sales, as well as its massive spending on cosmetic enhancement procedures—that it likes drugs that make us better than well, and it likes lots of them, thank you very much.

Today, Americans use more prescription stimulants than during the post-Vietnam speed epidemic, and over 6 million of these users are aged 4 to 17. This industrial-scale doping of American youth in the interest of better mental focus and higher output suggests that while anti-doping missionaries might claim performance-enhancing drugs are immoral and that regulators know what is best for people, in practice, Americans take a more pragmatic stance. Their attitudes regarding performance-enhancing drugs outside of sports suggest that what is moral is not what is most chemically pure, but rather what is most productive.

While much of the daily coverage of doping in Olympic sports focuses on the drugs taken and the people who took them, the larger, more inter­esting, and most useful story is the context, the social values, and the historical events that shaped our contradictory responses to performance-enhancing drugs and technologies in sport and everyday life. The forces at play are as wide-ranging as the politics of national defense, the eco­nomics of sponsorship, insecurities over global empire and personal appearance, pharmaceutical marketing, and the redefinition of aging from a matter of fate to one of choice that empowered consumers can bend given the right medical technology.

Further, the wall between sports and society is permeable; the behav­ior of athletes affects the buying and drug-taking decisions of fans, and the political actions of fans can alter what athletes do behind closed doors. Spitting in the Soup attempts to give a better understanding of this complicity and why it has never been in the interest of athlete, fan, or journalist to spit in the soup that feeds us all with the nourishing sustenance of money, entertainment, and—in the case of the Olympic Games—political clout.

Beginning with the ideals espoused by French aristocrat and Olym­pic founder Pierre de Coubertin, which were based on the chivalric romances he liked to read and his admiration for British public schools, in the 19th century, amateur sport was burdened with the idea that it could become a morally uncomplicated and uncompromised space in the midst of a fallen world. At the heart of this fantasy was the idea of amateurism—the belief that sport is the domain of the aristocratic lei­sure class, sealed off from the morally and genetically corrupted lower classes. When future Olympic managers came to realize the economic potential of the five rings, they eventually abandoned Coubertin’s idea of preserving the spirit of sport and fair play in the amber of amateur­ism. Over time, the battle against professionalism in the Olympics was replaced by a war against drugs. And this new struggle to keep sports pure was itself an echo of larger social anxieties about countercultural social and moral decay during the 1960’s.

The rise of anti-doping concerns in the 1960s led to the emergence of a complex anti-doping infrastructure that today attempts to impose moral and physical purity on the sporting universe. With no actual Edenic state of fair play to refer back to, anti-doping moralists have fab­ricated notions of a pristine pre–drug era that their missionary efforts would resurrect. And to create a sense of fear to justify the sometimes human-rights-violating intrusions of an anti-doping infrastructure, anti-doping crusaders, with the help of the media, made up tales about the mortal dangers of drugs that were often out of proportion to their actual, clinically documented lethality.

Spitting in the Soup investigates why the media and anti-doping infrastructure are also loath to spit in the soup that nourishes their own existence. For example, the story of European cyclists dying en masse in the 1990s from EPO is a myth—a fabrication that neither the press nor anti-doping campaigners examined for truth. Admitting that no evidence existed conclusively linking EPO to a supposed rash of endurance athlete deaths would expose as fraud a story that in many respects justified the existence of anti-doping regulators and sensation-hungry reporters.

We are not writing about a conspiracy. Today’s anti-doping bureau­cracies were built on a hope in the unseen, a religious sense that, given enough commitment and focus, athletes could return to a promised land where victory does indeed belong to the strongest rather than the best enhanced. No one set about with a master plan to create a self-sustaining anti-doping industry or ginned up doping stories to sell magazines and newspapers. The stigmatization of doping in sports—after nearly 100 years during which the act was unremarkably accepted, even praised, as a sign of professional commitment—is a natural progression of human events. By understanding these transformations, and the hypocrisies they hide, we can gain better insight into where anti-doping is today and where it might go tomorrow.

Understanding the broader context of doping in sports is not the same as excusing the behavior of those who break today’s rules against performance-enhancing drugs. If this were the case, then all history would be confined to narrow condemnatory or celebratory biography. It would also be hopelessly constrained by the precept that unless the explored topic reinforces society’s current values, that history should not be broached.

And this tension between our desire for sports stars to step into the sunshine wearing either a black or a white hat—villain or saint—gets us to the name of this book, Spitting in the Soup. The phrase comes from the French expression cracher dans la soupe. The closest English ver­sion of this idiomatic saying is “to bite the hand that feeds you.”

In the pro cycling peloton, a rider who threatened to expose a fellow rider who was doping would be scolded by his colleagues, “Don’t spit in the soup.” That is, do not expose the sport’s drug-charged reality and spoil things for all of us. Especially after the shadow of social stigma began to creep over pro cycling in the 1960s, exposing cycling’s tacit agreement to carry on its long-standing chemical traditions would only ruin the sport that nourished and supported the riders. Speaking frankly would also putrefy the broth that fed a sprawling supporting infrastruc­ture—a rolling family of coaches, managers, soigneurs, mechanics, doctors, and sponsors.

But spitting in the soup also applies to the “good” ones—the anti-doping activists, the sports organizers, the journalists, and we, the fans, who find that honesty about our own participation in a drug-dependentand drug-hysterical society is itself a way of spoiling that which improves us. Spitting in the soup is not limited to athletes—it includes our complicity. And the history of our mutual responsibility for a performance-enhanced world is what this book explores.

You can purchase the book at Velopress here.