New “Wearable Microgrid” Can Harvest Power from the Body While Cycling 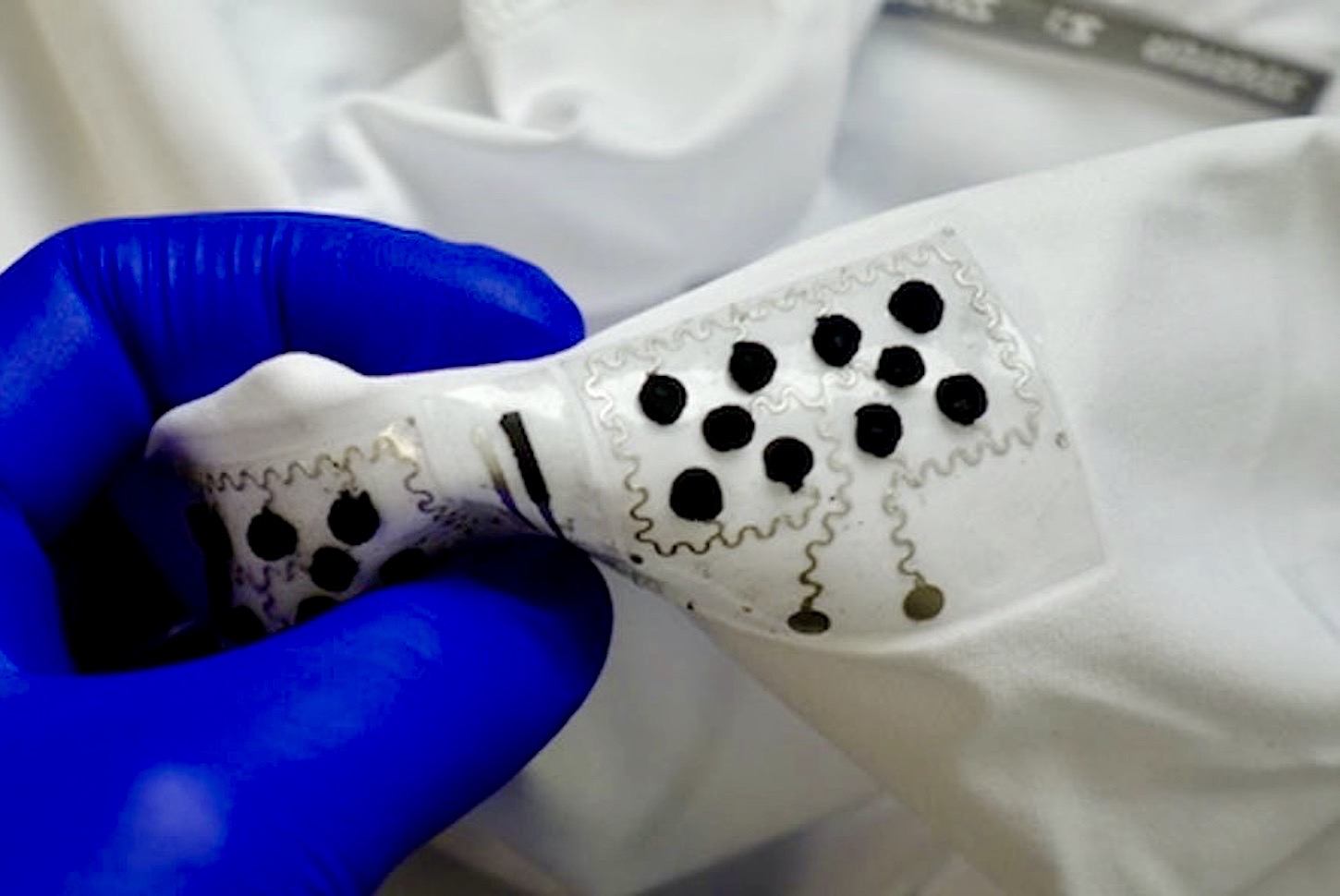 Nanoengineers at the University of California San Diego have developed a “wearable microgrid” that harvests and stores energy from the human body to power small electronics. It consists of three main parts: sweat-powered biofuel cells, motion-powered devices called triboelectric generators, and energy-storing supercapacitors. All parts are flexible, washable and can be screen printed onto clothing.

The technology, reported in a paper published Mar. 9 in Nature Communications, draws inspiration from community microgrids.

“We’re applying the concept of the microgrid to create wearable systems that are powered sustainably, reliably and independently,” said co-first author Lu Yin, a nanoengineering Ph.D. student at the UC San Diego Jacobs School of Engineering. “Just like a city microgrid integrates a variety of local, renewable power sources like wind and solar, a wearable microgrid integrates devices that locally harvest energy from different parts of the body, like sweat and movement, while containing energy storage.”

The wearable microgrid is built from a combination of flexible electronic parts that were developed by the Nanobioelectronics team of UC San Diego nanoengineering professor Joseph Wang, who is the director of the Center for Wearable Sensors at UC San Diego and corresponding author on the current study. Each part is screen printed onto a shirt and placed in a way that optimizes the amount of energy collected.

Harvesting energy from both movement and sweat enables the wearable microgrid to power devices quickly and continuously. The triboelectric generators provide power right away as soon as the user starts moving, before breaking a sweat. Once the user starts sweating, the biofuel cells start providing power and continue to do so after the user stops moving.

“When you add these two together, they make up for each other’s shortcomings,” Yin said. “They are complementary and synergistic to enable fast startup and continuous power.” The entire system boots two times faster than having just the biofuel cells alone, and lasts three times longer than the triboelectric generators alone.

The wearable microgrid was tested on a subject during 30-minute sessions that consisted of 10 minutes of cycling on a stationary trainer, followed by 20 minutes of resting. The system was able to power either an LCD wristwatch or a small electrochromic display — a device that changes color in response to an applied voltage — throughout each 30-minute session.

Greater than the sum of its parts

The biofuel cells are equipped with enzymes that trigger a swapping of electrons between lactate and oxygen molecules in human sweat to generate electricity. Wang’s team first reported these sweat-harvesting wearables in a paper published in 2013. Working with colleagues at the UC San Diego Center for Wearable Sensors, they later updated the technology to be stretchable and powerful enough to run small electronics

Each wearable provides a different type of power. The biofuel cells provide continuous low voltage, while the triboelectric generators provide pulses of high voltage. In order for the system to power devices, these different voltages need to be combined and regulated into one stable voltage. That’s where the supercapacitors come in; they act as a reservoir that temporarily stores the energy from both power sources and can discharge it as needed.

Yin compared the setup to a water supply system.

“Imagine the biofuel cells are like a slow flowing faucet and the triboelectric generators are like a hose that shoots out jets of water,” he said. “The supercapacitors are the tank that they both feed into, and you can draw from that tank however you need to.”

All of the parts are connected with flexible silver interconnections that are also printed on the shirt and insulated by waterproof coating. The performance of each part is not affected by repeated bending, folding and crumpling, or washing in water — as long as no detergent is used.

The main innovation of this work is not the wearable devices themselves, Yin said, but the systematic and efficient integration of all the devices.

“We’re not just adding A and B together and calling it a system. We chose parts that all have compatible form factors (everything here is printable, flexible and stretchable); matching performance; and complementary functionality, meaning they are all useful for the same scenario (in this case, rigorous movement),” he said.

This particular system is useful for athletics and other cases where the user is exercising. But this is just one example of how the wearable microgrid can be used. “We are not limiting ourselves to this design. We can adapt the system by selecting different types of energy harvesters for different scenarios,” Yin said.

The researchers are working on other designs that can harvest energy while the user is sitting inside an office, for example, or moving slowly outside.