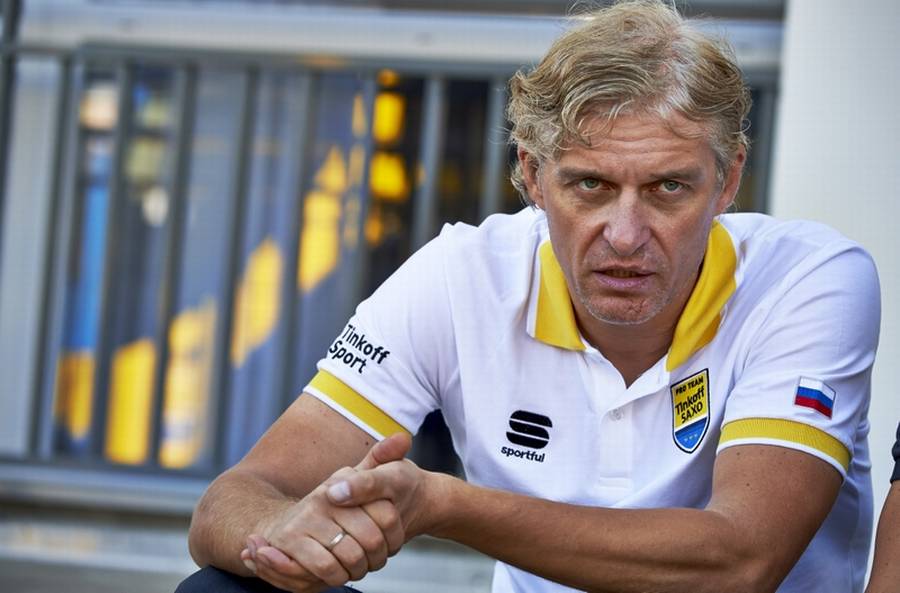 22 Jul 2015
By Gianni Pericolo - In LATEST ARTICLES, THE GREAT RACE

Never short on words and candor, the gregarious Oleg Tinkov had plenty of “inciteful” comments for the media during yesterday’s Tour de France rest day – about starting a “cycling revolution”.

Speaking at an outside press conference alongside his riders, Albert Contador and Peter Sagan, Tinkov was nothing short of a gatling gun of outlandish comments. To wit:

“You know how it worked in the French Revolution at the Bastille. They put the king’s head on the guillotine. In the same way, the people of cycling need to get together and make a revolution. Lets start a cycling revolution. We can put the king in the guillotine and chop his head off…” Tinkov said, letting out his loud laugh…

“Cycling is an international sport; it’s not only a French sport. It doesn’t belong to them. Maybe they think so but it’s not true. There are not even any good French riders in the peloton now. They haven’t won the Tour for over 20 years now and I think it’ll be another 20 years before they win it. France is not important in this sport anymore. It’s dominated by Anglo-Saxon teams and Eastern block teams.”

No doubt that Tinkov would like to put Christian Prudhomme’s neck in the guillotine, after he claimed the race director snubbed him during this year’s race.

“It’s not the first time we’ve had a meeting with Yann Le Moenner and ASO but now I think they’re scared, especially Christian Prudhomme, who didn’t say hello to me the other day,” Tinkov said.

“They should relax. I’m going to show them the way. Sometimes you have to be shown how to do something better. They’ve got a monopoly, a typical French monopoly. I say that because if the teams start to disband, then it’s not going to be better for them. My prediction is that there will be a lot of hassle because I’m sure Rihs will stop, Makarov will stop and I’ll stop. I’m not going to pay 20 million Euros from my own pocket. Why? Enough is enough. Everybody is fed up. Everybody is waiting for the changes but they’re not coming. And the big sponsors are not coming.”

As far as his thoughts on the UCI are concerned, well here you have it.

“I think the UCI is hopeless. I don’t really see them,” Tinkov said of the UCI.

“I think it should be ASO, the race organisers and the teams together with Velon. I hope Velon can make the push. They (ASO) understand that when we are together, they can’t do much without us. They want to separate us and they’re doing a good job because they’re smart French people. But once we stand together, they will understand we have power.

“The problem with Velon is that they never really explained who they are and what they do. When I spoke to Vinokourov, I say: ‘Sacha, why aren’t you in Velon?’ and he said: ‘Nobody really explained things to me but I’d like to join.’ It’s the same with Katusha and even MTN-Qhubeka. I spoke to their manager last night and he said nobody had invited them.

“The changes we need are not only about TV rights and revenue. It’s also about implementing a transfer system, a franchise system and obviously a salary cap. We need that because if we start to make more money and it goes to the stars, it doesn’t make things any better. We have to follow the NFL or NBA model as an example. I think the other managers are on the same page but they’re afraid of ASO. They don’t have the same balls as I do. Though now they (ASO) are afraid of me and so the other teams are starting to join me.

“I know that they (ASO) are going to kill me but that’s fine. It’ll be interesting to see what they do. The more they push me, the more they show they’re afraid and that I’m right. Their strength would be to collaborate with me and us. I’ve spoken to several teams and all the Velon teams are on the same page.

“All sports had this kind of old business model but I’m sure that in five years this model will be gone, blown away for sure. I’m glad if I’m the one who can push it forward. I know that Manolo Saiz tried and they killed him. I know that Johan Bruyneel tried and they killed him too. But I have nothing to lose. My worst-case scenario is that I stop sponsoring the team and I go and ride my bike at my villa in Forte dei Marmi in Tuscany. The team is not my source of income. It’s the riders, staff and managers who will lose money and I’m fighting for them. I can’t lose because my downside is just to stop and leave the sport.”