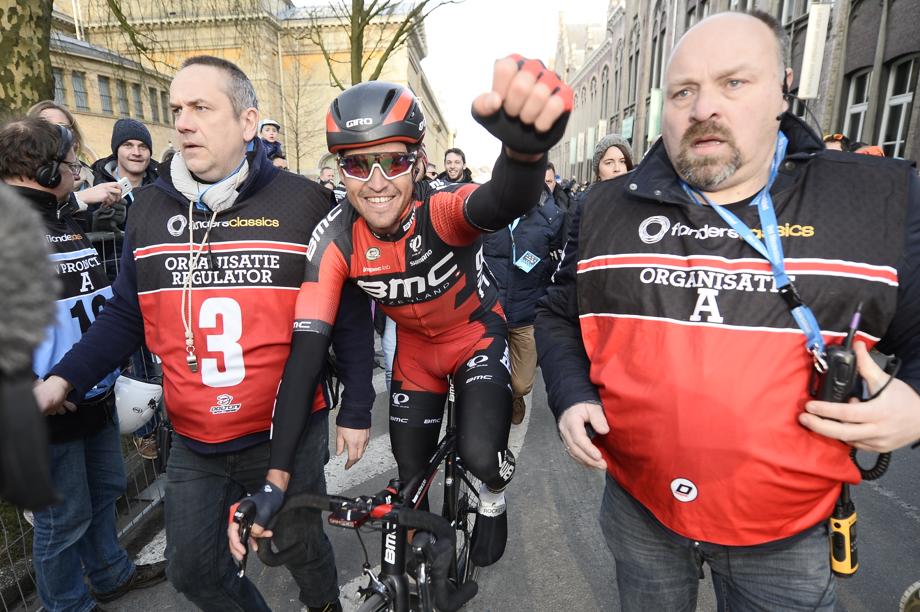 Greg Van Avermaet (BMC Racing) claimed his first victory of the season today, after fending off a challenge from World Champion Peter Sagan to win the opening race of the Belgian Classics season – Omloop Het Nieuwsblad.

From there, the group went on to establish a maximum advantage of 5:30 over the peloton.

As the race reached the first climb of the day, the Kruisberg, a crash plagued the peloton, claiming Tosh Van Der Sande (Lotto-Soudal), Magnus Cort Nielsen (Orica-GreenEdge) and Dennis van Winden (LottoNL-Jumbo) as its victims.

Following the climb of the Taaienberg, a majority of the breakaway group had been reeled back in by the chase, with only Dhaene, Gougeard, Reus and Morice continuing to remain out front.

With just 20 seconds separating the peloton from the leaders, Van Avermaet set a fierce pace on the Eikenberg.

It wasn’t long before Van Avermaet, Tiesj Benoot, Luke Row, Peter Sagan and Daniel Oss (BMC) were able to bridge their way Dhaene and Morice, who had since been dropped from the lead group.

Just before the cobbles of the Haaghoek, the remaining two leaders were brought back as well, creating a new lead group of eight riders.

Following the final climb of the Boembeke, the leaders were still holding unto a one minute lead over peloton, which was being led by Etixx-QuickStep’s Nikolas Maes, Lukasz Wisniowski and Stijn Vandenbergh.

As the leaders hit the long sectors of pave in Paddestraat, Lippenhovestraat and the Lange Munte, Reus punctured and consequently lost contact with his breakaway companions.

Meanwhile, back in the peloton, Jasper Stuyven (Trek-Segafredo) managed to ride clear, only to find himself caught in purgatory – at 15 seconds ahead of the chase and 40 seconds behind the leaders.

As the race made its way to the Lange Munte, Stuyven found himself battling a strong headwind, leaving less than 20 seconds between him and the chase. And, moments later, it was all over for the Trek-Segafredo rider, after he went down in one of the cobbled corners.

From there, Sagan upped the pace on the cobbles of the Lange Munte, quickly dropping Reus, D’Haene and Morice. A little later 22-year-old Gougeard was dropped too but he returned when Sagan came off the front. Coming off the cobbles the gap for the five leaders on the peloton was still more than 50 seconds. From there, there were no more small twisting farm roads but 17 wide national roads to the finish town Gent.

Van Avermaet started the sprint in fourth wheel but took an aggressive line into the final corners. It meant he was on the front coming around the last bend, with Sagan and Benoot desperately trying to respond. However, they couldn’t catch the BMC rider and the Belgian hung on for a deserved milestone victory.

World Champion Lizzie Armistead got her spring Classics campaign off to a good start today, after winning the elite women’s Omloop Het Nieuwsblad.

Meanwhile, her teammate Chantal Blaak delivered a one-two victory for the Boels Dolmans team, after she beat Tiffany Cromwell (Canyon-SRAM) in the reduced bunch sprint.

Armitstead found herself in what she called “an accidental breakaway”, when she lifted the pace with 20 kilometers remaining.

“It wasn’t an attack,” Armitstead insisted. “It was people messing around and watching each other and not watching me, which never happens, so that was really cool.

“I went to the front of the group and accelerated and somehow ended up on my own.”

Armistead and Gracie Elvin (Orica-AIS) found themselves out front in as a two-rider breakaway group during the last 20 kilometers.

From there, the duo stretched out their advantage to 45 seconds over the main field.

But, for whatever reason, Elvin refused to share in the work.

As a result, Armistead was forced to go it alone during the final 10 kilometers.

Back in the chase, despite their best efforts, Armitstead’s gap only continued to increase. And, with four kilometers remaining, the British rider managed to push her lead out to 37 seconds – and on to victory.

“It was really frustrating to me,” Armitstead said. “I thought, well, we still have the numbers to play behind, so I’m not working if you’re not working. We stopped completely in the road and looked really stupid. But there was a slight drag in the road. I attacked Gracie, and I never looked back.”

“People hesitated a bit,” noted Blaak, who was in the chase group when Armitstead went away. “Wiggle and Rabo started riding eventually. They kept Lizzie at a certain distance but they couldn’t close it completely. We were waiting because we know when it comes back, we might need to attack again.”