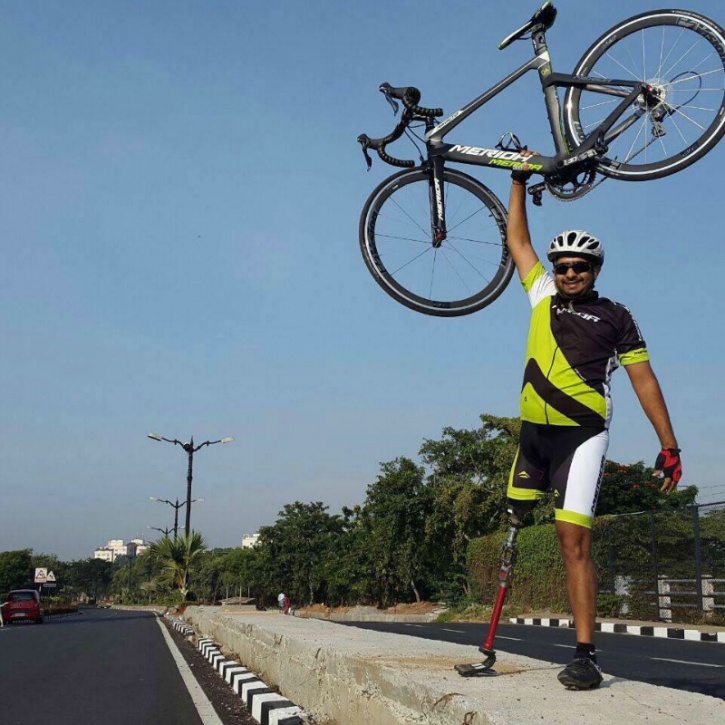 Aditya Mehta, who in 2013 became the first Indian to secure two silver medals at the para-Asian cycling championship, reached Mumbai, India yesterday, after completing a a 1,450 kilometer journey from New Delhi on his bike.

However, unlike most cyclists, Aditya covered this distance without his prosthetic leg, with his left limb saddled onto the pedal. The aim of this ‘adventure’, Aditya says, was to show support and respect to the paramilitary personnel who have lost their limbs in war.

For someone who had never played sport at any level, that he started cycling after a road accident is intriguing. “After my injury, I was really depressed. I felt as though people saw me differently and that really played on my mind. I just kept eating and barely even left my house,” he said.

It took the words of a polio-affected lady who changed his life. “She talked to me differently. There was no hint of sympathy in her voice.”

Looking at how much weight he had put on in that period, the lady said that he would soon have serious health problems if he didn’t exercise.

“That was an eye-opener. People know if they’re unfit, but when someone puts things in such a crude way, it pinches you,” he said. The next day, he saw a hoarding promoting a cycling event.

Owing to his love for cycling from a young age, when he used to go “everywhere” on his cycle, he saw it as divine intervention. “It’s been three years since then. I can now say that losing my leg was a blessing in disguise,” the 32-year-old said.

Had it not been for his accident, he would’ve continued to play a role in his family business, where money was all that he cared about. “I’m a completely different person now. Sport has given my life a new perspective.”

Holder of four titles in the Limca Book of Records, Aditya nevertheless says that they hold little significance to him. “My aim is for para-athletes to get recognition for what we do. If you see the recent trend, able-bodied athletes in the country aren’t doing half as well as we are. Yet, we get little support from the government,” he said.

“Someone like Saina Nehwal gets all the fanfare as she steps out of the airport. There have been instances where not even one person has come to greet us after a successful campaign.”

Though he has set up a foundation to support other para-athletes, the Hyderabadi wants it to “shut down as soon as possible”.

“The existence of such institutions wouldn’t be required if we were getting enough resources for training and enhancing our skills,” he said.

Though he comes from a well-off family and can afford to spend the required money, many others competing at the national level can’t, he argues.