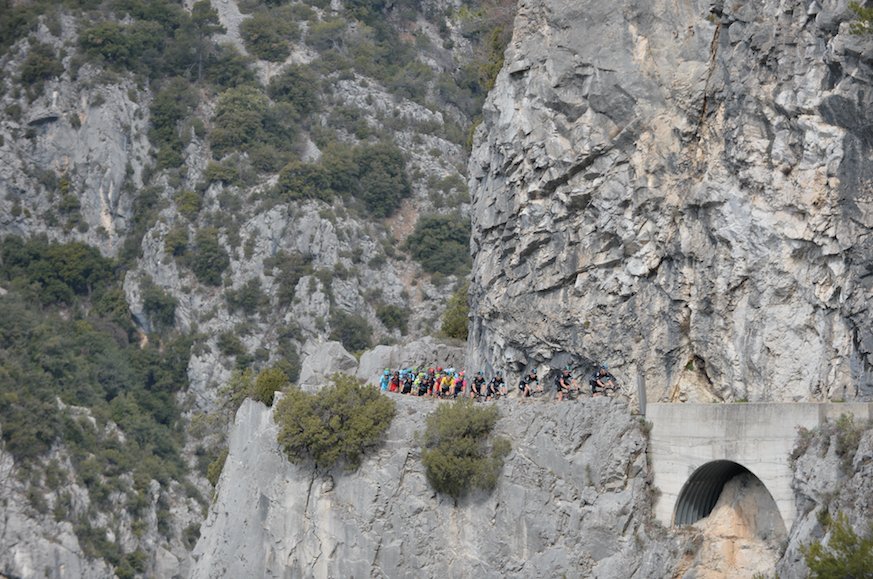 Geraint Thomas maintained Team Sky’s grip this year’s Paris – Nice today, narrowly winning the 74th edition of the Race to the Sun on the aptly-named Promenade des Anglais, to claim the British team’s fourth victory in five years in the event.

However, it was a tense battle for the British rider, as he was constantly under threat by Alberto Contador (Tinkoff) all day, who attacked repeatedly on the last two climbs before finishing second in both the stage and overall classification, ultimately missing his third Paris-Nice crown by a slim four seconds.

Meanwhile, Richie Porte (BMC) finished in third, at 12 seconds back, to claim the final spot on the podium.

Further along in the stage, Duchesne strengthened his hold on the polka-dot jersey, after claiming the KOM points on the Cote de Duranus and Cote de Levens.

However, it wasn’t until after the Cote de Chateauneuf and the Col de Calais, that the Canadian rider secured his KOM victory, bringing the curtains down on De Gendt, who previously won the title last year.

Back in the peloton, as the race reached the climb of the Cote de Peille, Contador proceeded to blow the field apart, after launching a blistering attack, that caught Team Sky off guard.

Contador aggressions quickly earned him a small advantage of 50 seconds over the Thomas group, while former members of the breakaway group who had since been dropped, Kiserlovski and Trofimov, waited up the road for the Spanish rider to render him support.

In the meantime, six of the original escapees, Gautier, Wellens, De La Cruz, Herrada, Kangert and Grmay, were still holding onto a slight lead.

However, not long after, Team Sky managed to get back on terms with Contador et al, but as the race tackled the Col d’Eze, the Tinkoff rider went on the attack again, administering a flurry of fierce accelerations accompanied by Romain Bardet (AG2R).

The final attack, which proved nearly fatal to Thomas, was this time led-out by Rafal Majka during the final two kilometers, where Contador once again broke free, taking Richie Porte (BMC) along with him.

From there, the two riders caught the last of the escapees on the summit.

However, the descent would ultimately become the true test of today’s stage, with Wellens joining forces with his teammates Sergio Henao and Tony Gallopin (Lotto Soudal), who proceeded to deliver the Belgian rider into perfect position to hold-off Contador and Porte in a final dash for the line.

After the stage a jubilant and relieved Thomas told reporters: “When Alberto went on the Cote de Peille I stuck with my team and felt good, strong and in control, but when he went again half way up the Col d’Eze my legs just gave way. It was horrible and I thought ‘this is going to be all over’.

“I got dropped from the chase group and thought I was going to struggle to even get on the podium. Thankfully Sergio stayed with me.

“I had a 54 chainring on for the descent in case I had to chase and I certainly needed that at the end. It was full gas, and to finally latch back on in the last few kilometres was really good.

“It’s incredible to have won Paris-Nice and hard to believe, to be honest. Contador is one of the best stage racers ever and Richie won nearly every race he did last year, so to beat those two – I can’t really believe it.

“I came here trying to win and do the best I could, but to actually do it is amazing. It’s the biggest win of my career, for sure, and I’m over the moon.”