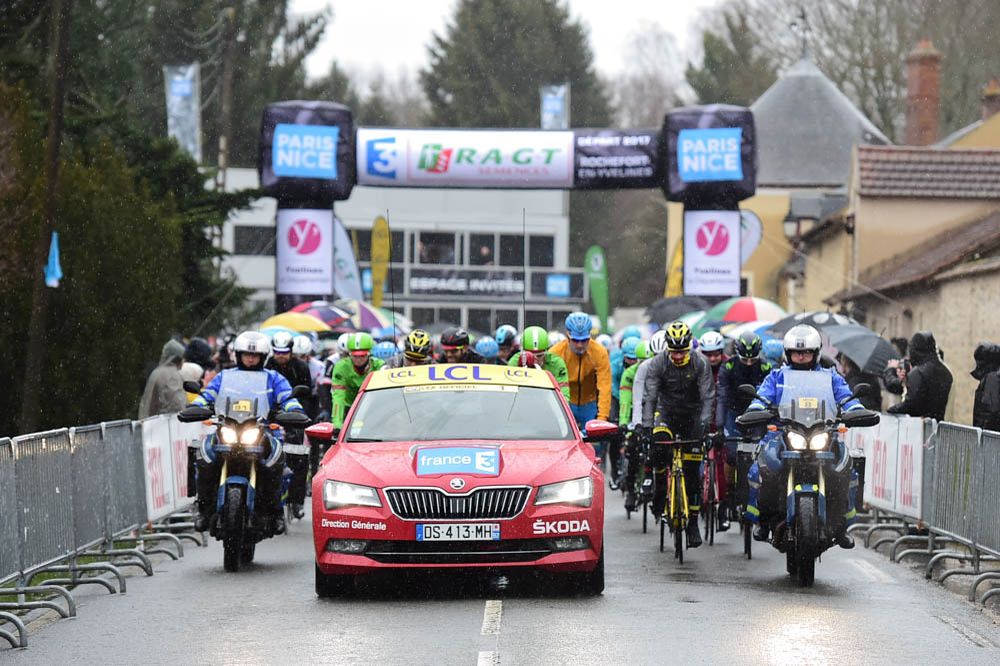 Sonny Colbrelli handed his new Bahrain-Merida team their first World Tour victory today, after he surged during the final few hundred meters to snatch stage 2 of Paris-Nice ahead of John Degenkolb (Trek-Segafredo) and race leader Arnaud Demare (FDJ) in Amilly.

Meanwhile today’s wet stage saw 2013 and 2015 winner Richie Porte lose considerable ground, as did other pre-race favorites like Nacer Bouhanni (FDJ), who called it quits on the road from Rochefort-en-Yvelines.

From there, Hardy was the first rider to crest the only climb of the day, Cote des Granges-le-Roi, thus solidifying his lead in the KOM points.

However, it wasn’t long before the breakaway group was reined in by the peloton, which subsequently split around the 28 kilometer mark with most of the race leaders and jersey-holders making their way into the front group.

The first sprint of the day in Pussay went to John Degenkolb (Trek-Segafredo) ahead of Julian Alaphilippe, who took two seconds off yellow jersey holder Demare.

Dan Martin was later dropped from the group at the 80 kilometer mark, while the group containing Contador remained two minutes off the pace – followed by Richie Porte who trailed at 2:30 further back.

However, after a long chase, the peloton managed to regrouped at the 138 kilometer mark, only to see Bystrom, Gallopin, Wynants, Sarreau, Soupe and Siskevicius attack off the front.

Soupe was quickly dropped from the group, while Philippe Gilbert succeeded in bridging his way to the five leaders.

Sarreau punctured shortly afterwards, while Gilbert claimed the second sprint of the day in St Germain-des-Prés ahead of Tony Gallopin and  Wynants.

Heading into the final 20 kilometers, the escapees’ lead had fallen to just 30 seconds, prompting Gilbert set out on his own.

From there, Gilbert went on to establish an advantage of 45 seconds over the chase.

However, with 6 kilometers to go, the Belgian champion was eventually reeled in, as the field once again came back together.

With that stage now set for a bunch sprint, Demare quickly found himself in excellent position, but the yellow jersey holder was caught off guard by Colbrelli, who timed his sprint to perfection during the closing 400 meters to seize the stage honors.