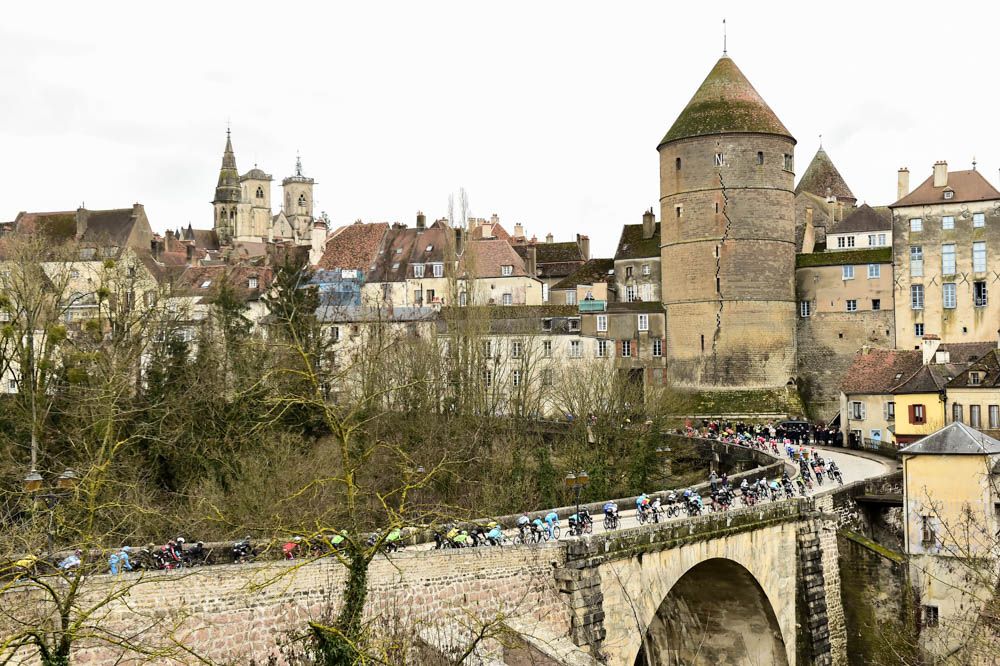 Sam Bennett (Bora-Hansgroghe) bested some of the peloton’s top sprinters to claim stage 3 of Paris-Nice today, after the Irish rider opened up his sprint at the right moment to upstage Alexander Kristoff (Katusha), John Degenkolb (Trek) and Marcel Kittel (Quick Step) and win his first victory of the season.

From there, the trio went on to establish a substantial advantage of more than six minutes over the peloton, as they reached the first intermediate sprint of the day in Eposes, which saw Combaud claim all three sprint points ahead of Latour and King.

As the escapees reached the 86 kilometer mark, their lead had stretched out to an even more sizable gap of eight minutes over the chase.

However, following the feed-zone, the peloton began to organize itself, thanks to efforts being led by Team Katusha.

Indeed, after the Cote de Granmont the breakaway group’s advantage had been reduced to three and half minutes. And, after the race had reached the Cote de Charrecey, the escapees’ lead had fallen to just one minute – with 25 kilometers to go.

In the meantime, Latour claimed the KOM points ahead of Combaud, while King lost ground with his breakaway companions.

King was later joined by Nicolas Edet (Cofidis), but both riders were reeled in with 20 kilometers to go.

Shortly thereafter, South African champion Reinhardt Janse van Rensburg was forced out of the race after crashing heavily in the middle of the peloton.

Meanwhile, back up front, Latour claimed the second intermediate sprint in Mercurey ahead of Combaud.

The two leaders continued to remain out front for the last kilometers. But, no sooner did the duo pass under the flamme rouge, they were caught by the peloton.

From there, Katusha and Quick Step began ushering their respective sprinters into place, while Demare found himself blocked near the barriers on the left side of the road.

Regardless, no one was able to react to Bennett’s final surge during the closing 150 meters – to deny the Bora-Hansgrohe rider the day’s victory.