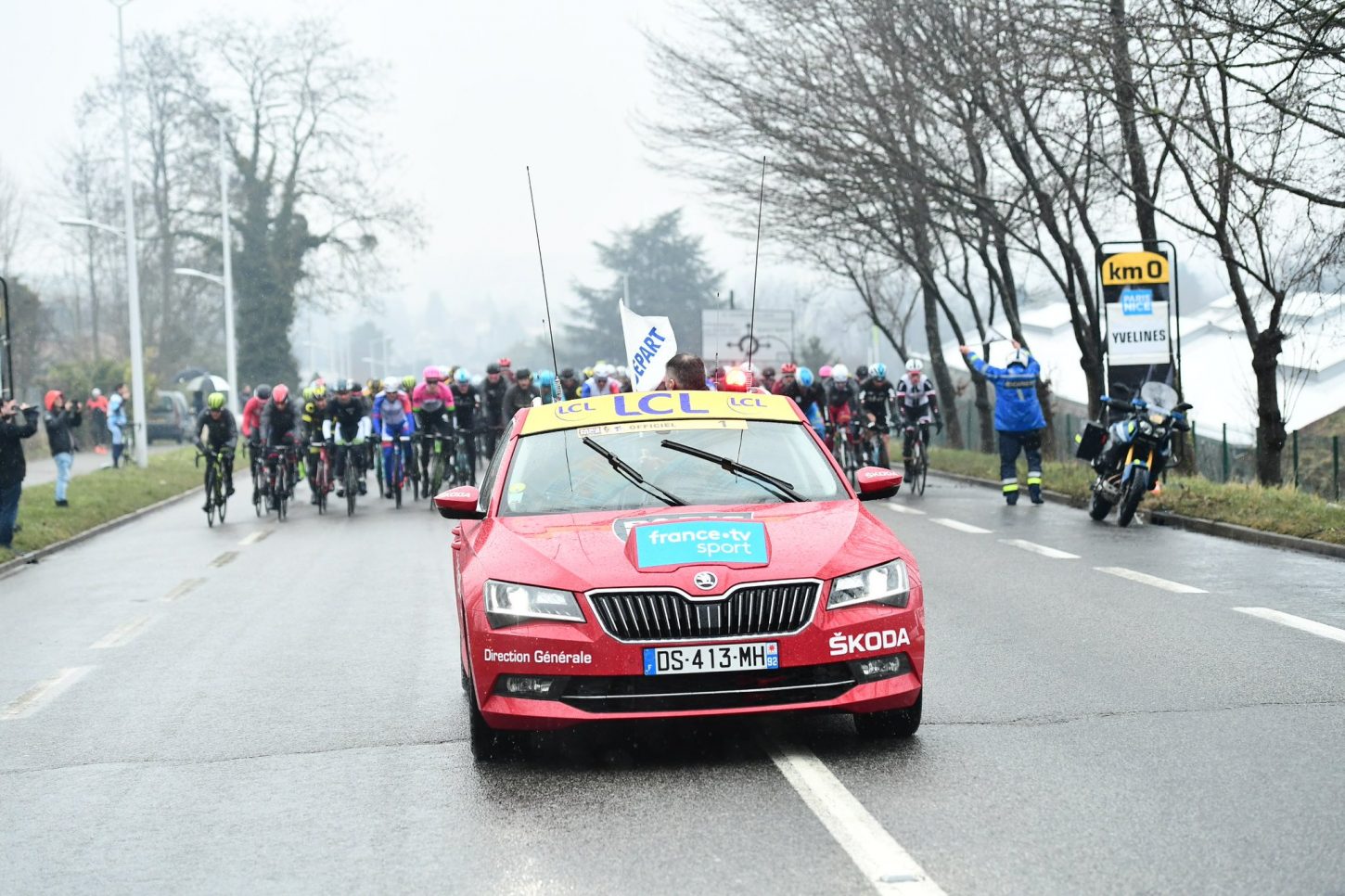 Démare, who won last year’s opening stage, was part of a group of late sprinters who pushed through to overtake Gorka Izagirre and Alexis Vuillermoz.

Vuillermoz had been the leader late on, but he was overtaken by Izagirre, who attacked on the uphill, cobbled finish.

From there, it appeared as though the Basque climber, an unlikely sprint victor, was going to seize the victory just before Démare, Christophe Laporte and Tim Wellens caught him.

The four finished with hardly anything separating them and initially it was Izagirre who was celebrating.

However race officials gave the victory to Démare by the slimmest of margins, also earning the French rider the first leader’s jersey.

The start was given to 154 riders in the pouring rain. On the gun, Jurgen Roelandts (BMC), Pierre-Luc Perichon (Fortuneo) and Pierre Rolland (Education First-Drapac) moved ahead and their lead quickly grew (1:40 at kilometer 10). At the first intermediate sprint of the day in Les Mesnuls (km 33), the gap reached its maximum of 3:35. Roelandts snatched three points and three seconds ahead of Rolland and Perichon. After the sprint, as the pack gathered momentum under the guidance of Julian Alaphilippe’s Quick Step and Groupama-FDJ’s Arnaud Démare team-mates, the gap kept decreasing.

As they tackled the first climb of the day, the 3rd category Cote des 17 Tournants (Km 79), their lead had gone down to 1:05 as Perichon led the way, followed by Rolland and Roelandts. The result on Cote de Meridon (km 85) was exactly the same, handing Perichon the first KOM jersey in this edition of the Race to the sun. The gap went up a bit as the three reached the plaque dedicated to Jacques Anquetil at Chateaufort (km 96) for a sprint again won by Roelandts ahead of Rolland and Perichon.

As the pace raised, a crash at kilometer 100 involved four riders, including American pre-race favorite Tejay Van Garderen (BMC), who was forced to call it quits. With 20 km to go, the three seemed to give up the fight but the peloton took its time to close the gap and only caught the escapees at km 121. Mitchelton-Scott, Astana and Lotto-Soudal took turns in the final 10 km leading to the Meudon observatory. A crash, involving Ilnur Zakarin and Jakob Fuglsang, took place shortly before the last climb when France’s Alexis Vuillermoz surged.

The AG2R rider, winner of a similar stage in Mur de Bretagne on the Tour de France two years ago, seemed to have the upper hand but he faltered in the long cobbled last stretch and was overtaken by the front of the bunch, led by Gorka Izagirre, who battled it out with Demare, Laporte and Wellens. Demare threw his bike to the line in despair and the outcome was so close that the four top finishers had to wait for the photo-finish to discover who had actually won. The laurels went to an elated Démare .