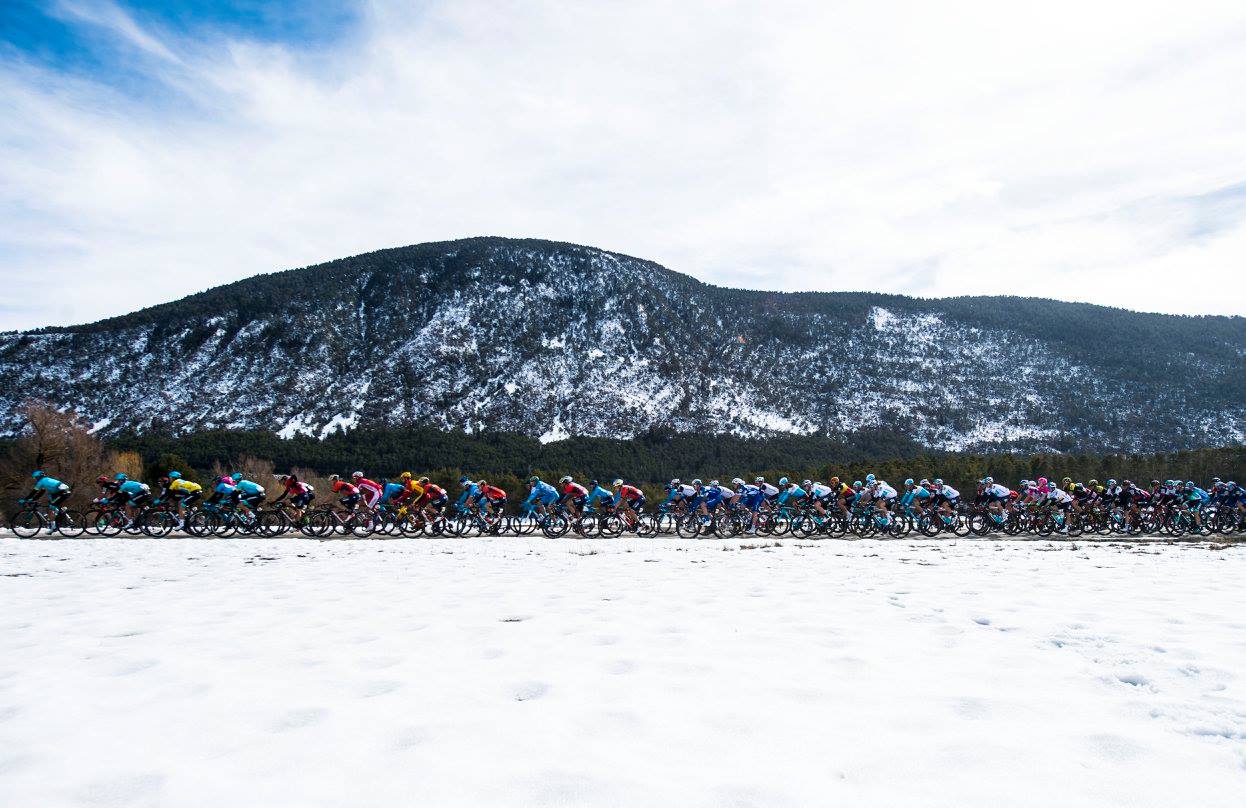 Simon Yates demonstrated his climbing prowess when he reached the snow-capped summit finish at La Colmiane alone to claim stage 7 in Paris-Nice and takeover the yellow jersey with just one stage left.

The svelte climber arrived at the summit finish eight-seconds clear of Belgian and Spanish rivals Dylan Teuns and Ion Izagirre, the only men able to keep up with him on the steeper slopes.

Meanwhile, Team Sky’s Sergio Henao was 46 seconds behind and Jakob Fuglsang of Astana a further seconds back, while overnight leader Luis Leon Sanchez (Astana) got dropped with 6 kilometers remaining.

Yates now leads brothers Ion and Gorka Izagirre by 11 and 12 seconds,  while Tim Wellens sits in fourth one second back.

Yates attacked with four kilometers left of the long climb to Valdeblore-la-Colmiane at the end of a mountainous 175-kilometer stage contested under dull skies around Nice.

Bahrain-Merida’s Izaguirre initially went with Yates but lost touch inside the final 1,500 meters as he crossed the line alone.

Sanchez of Astana began the day in yellow but cracked on the long 16-kilometer climb to the finish, consequently falling  of the top 10 overall by the end of the day.

Also caught out as the road ramped up was French hopeful Julian Alaphilippe, who dropped down to ninth place, almost two minutes off the yellow jersey.

In addition, eight riders were separated by a minute at the top of the standings by the end of the stage. Lotto-Soudal’s Wellens was 13 seconds down, Teuns 27 seconds off the pace and Movistar’s Marc Soler 37 seconds adrift. Bora-Hansgrohe’s Patrick Konrad will start the final day with a 39-second deficit while Team Sky’s Sergio Henao begins 57 seconds down.

The miserable weather on the so-called ‘Race to the Sun’ took its toll today, with several riders including Team UAE Emirates’ Dan Martin abandoning the race.

BMC’s Alessandro De Marchi was involved in a frightening crash on a descent – going over the crash barrier and disappearing into a ravine before being helped back up.