The French Connection and the 1960 Giro d’Italia 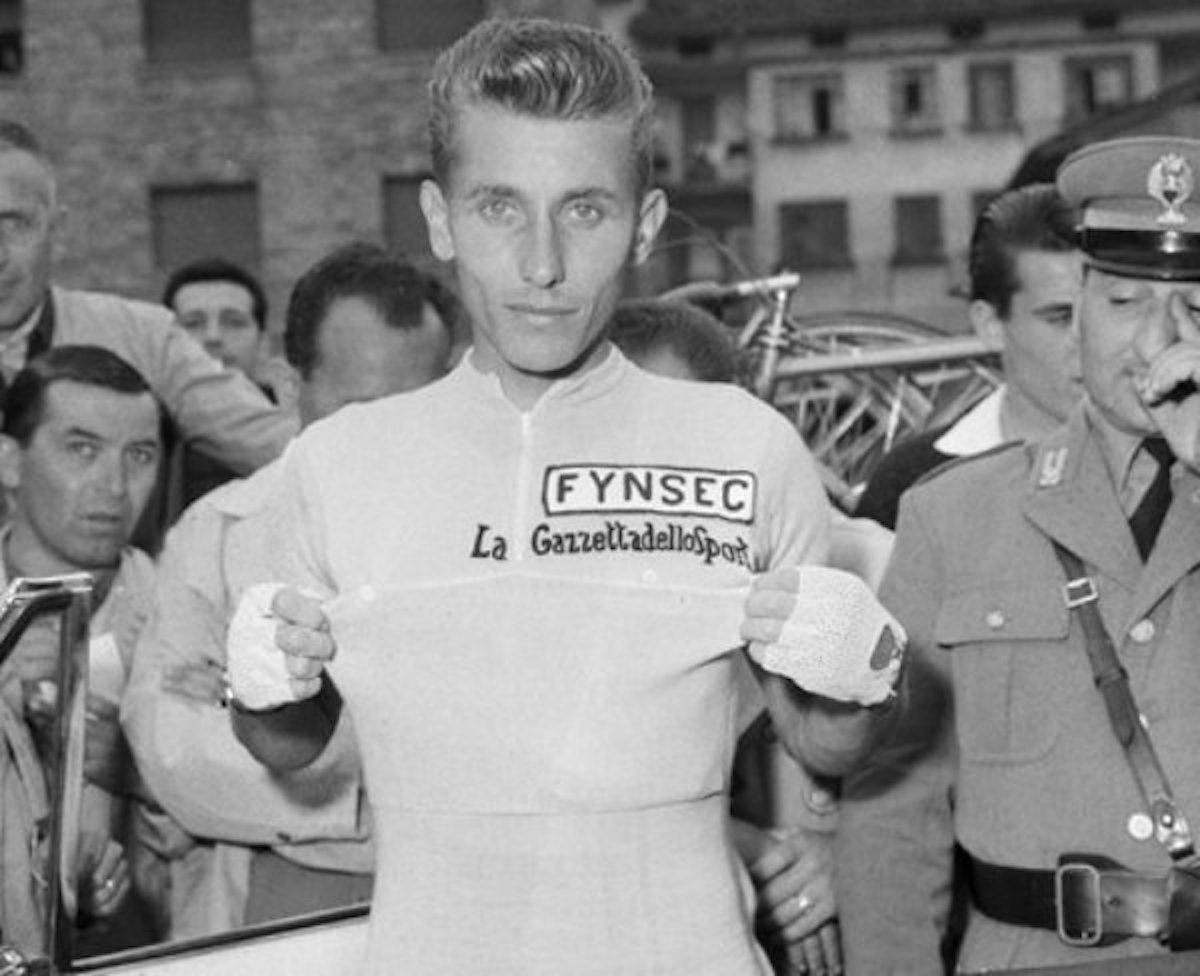 Out of 101 editions of the Giro d’Italia, 67 have had an Italian winner whereas the Tour has seen just 36 French wins out of 115 races. Every now and again the Giro organizers have tried to encourage great champions from other countries. Coming as it does just one month before Le Tour this has always been a difficult proposition.

In 1960  had already established himself as the man of the era. Anquetil made no secret of the fact that money was his prime motivator to race bikes for a living. In the lead up to the 1960 Tour the great French caricature artist Pellos summed up the reason for Anquetil’s absence from the race. He depicted Anquetil with a big bag of “Giro money”.

However Anquetil was also a very proud man. He raced for money, but he also raced to win. In this endeavor he built around himself a team of some of the best riders in the world dedicated to ensuring that the great man took the victors spoils.

The Contenders, the Hurdles

For the main contenders the 1960 Giro had three major hurdles; the day of the Cervinia climb, the 68km time trial near Milan and the long Dolomite mountain stages with the mighty Gavia Pass being the most feared. Besides Anquetil the other favorites were Charly Gaul “the angel of the mountains” and Italian champion Gastone Nencini. Gaul had won the 1958 Tour and the 1959 Giro where he had demolished Anquetil (2 nd that year) in the mountains. Nencini had finished third in the 1955 Giro and won the race in 1957. The Italian tifosi (passionate fans) were still mourning the premature death of Fausto Coppi earlier that year and wanted to see one of their own hero’s honor the memory of the “Campionissimo”.

On the 15 mile climb up the Cervinia to 6000 feet, Gaul soared away as expected right from the base. Unfortunately Gaul was suffering from a sore throat which clipped the “angel’s” wings. A small group including Anquetil caught the Luxembourger before the top. The GC status quo was maintained and Gaul simply stated that “this hill is not tough enough for me; I will do better in the Dolomites.”

For the 68km time trial on Stage 14 Anquetil was in majestic form. He caught and dropped Gaul who had started six minutes ahead of him. Nencini rode a little better to claim second place on the day but he still lost a massive 4 minutes 26 seconds to Anquetil. The pink jersey of race leadership now moved to Anquetil 3 minutes 40 seconds ahead of Nencini in second and 7 minutes 58 seconds ahead of Gaul who fell to 6th place.

Drama on the Gavia

The stage was now set for the final act; drama on the Gavia. In those days most mountain passes in the Giro and Tour were on unmade dirt roads. Nobody thought that was anything special. It’s just the way things were. The Gavia is the third highest pass in Europe and in 1960 was rarely used even for motor traffic due to its dangers. Reports of unprotected 2,000 feet precipices on the descent, incredibly steep inclines and brown bears inhabiting the upper slopes caused considerable trepidation with the race convoy. “It is just like a Tour de France pass 50 years ago in the days of Eugene Christophe,” reports said.

Whatever their fears, the Gavia awaited Anquetil and the pushers awaited Nencini. This unsporting action by dozens of crazy tifosi had been stamped out at the Tour but at the Giro it was still very prevalent. In fact it was this that Anquetil feared more than the climb itself.

By the halfway mark only a handful of riders remained in the lead. Imerio Massignan was away on his own. Gaul went after him, caught him on the descent and won the stage. Meanwhile Anquetil twice dropped Nencini only to find him coming back under the impetus of tifosi pushers and thus freewheeling past Anquetil! This, plus two punctures late in the climb, meant that Nencini topped the Gavia 15 seconds ahead of Anquetil. On his “death dive” descent to the finish in Bormio, Nencini opened up a gap of about 2m 30secs on Anquetil but this was still 28 seconds too few.

Next day, the last stage of the race, was 225km from Bormio to Milan. It was still possible for Anquetil to lose his race. However at the end of the day two things were in his favor (his team and the race officials). Anquetil’s veteran teammate Hilaire Couvreur said, “28 seconds, 28 minutes, 28 hours, what does it matter? You’ll arrive at the Vigorelli track with all us Helyetts protecting you as winner of the Giro.”

Thus Anquetil became the first Frenchman to win the Giro. That July he retired with his big bag of ‘Giro money’ to his stately gentleman farmers mansion in Normandy to rest. Gastone Nencini took the hard road and traveled to France to ride the Tour. Which he won by nearly five and a half minutes.

SPECIAL NOTE: It should be noted that Nencini was a good sportsman. Like all top riders then and now, he did not like getting pushed but there is not a lot one can do when a bunch of crazy fans get behind you. Even so the organizers claimed that had Nencini given Anquetil the slip into Milan and taken back those 28 seconds then he would have been disqualified for being pushed up the Gavia. “It was a disgrace to Italian sport,” they agreed.