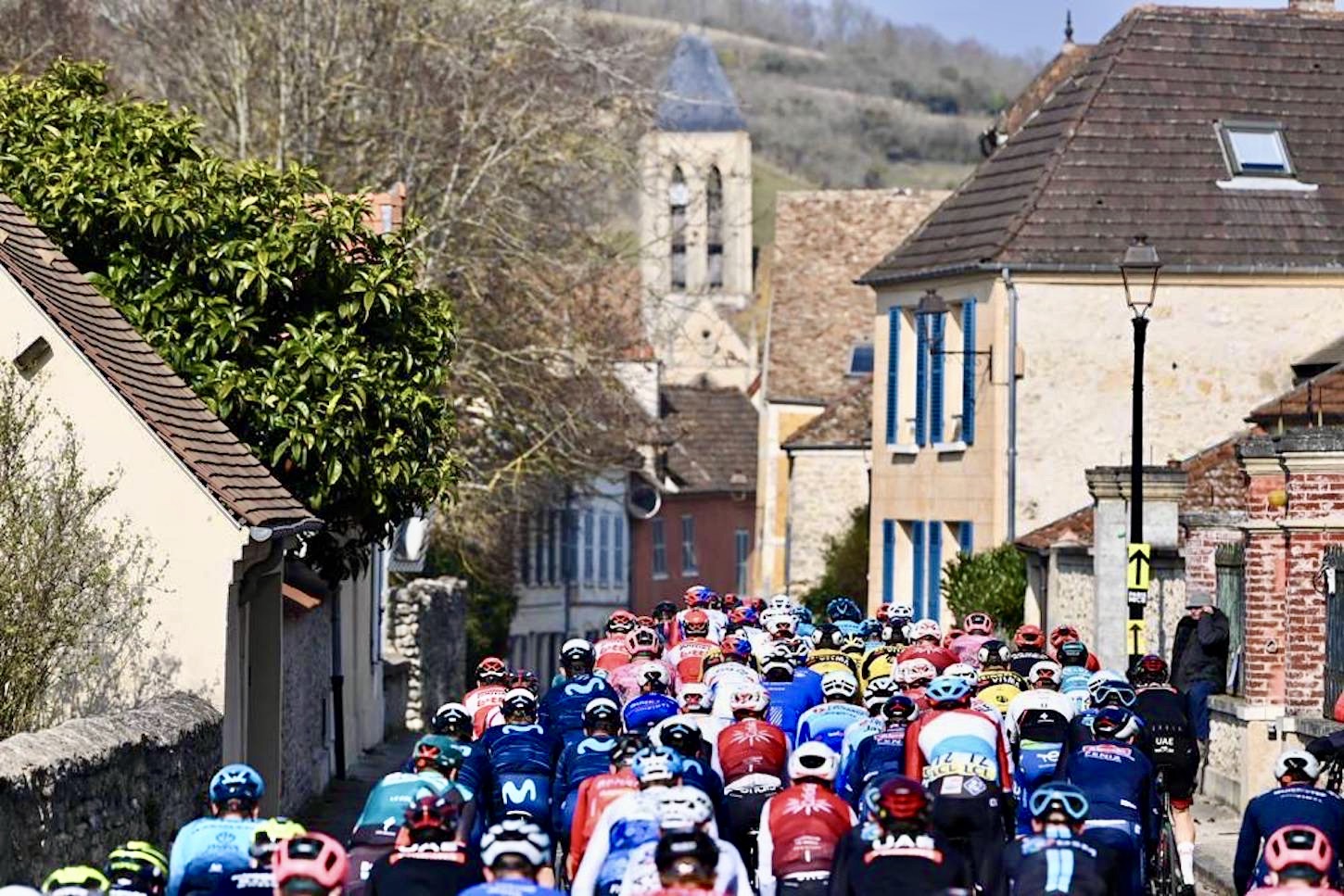 Christophe Laporte won the opening stage of Paris-Nice today, followed by his teammates Wout van Aert and Primož Roglič, making it a 1-2-3 victory for Jumbo-Visma.

After some tussles through the wind, the Dutch squad made the most of the tricky hilly final circuit. Not only did they shred all of their rivals with 6 kilometers to go, the trio crossed the finish almost 20-seconds ahead of any challenger.

Only two riders made a concerted effort to attack early on in the stage –  Matt Holmes of Lotto Soudal, and Aime De Gent (Intermarché – Wanty – Gobert Matériaux.)

Holmes went first, just a few kilometers out from the official start, before being joined by De Gendt. With the peloton content to let them go, the pair soon established an advantage of over a minute.

The Briton led over the first official climb, the 1.8km, 5.8% gradient Côte de Vétheuil, as the peloton cruised along, with the race covering the 37.38km in the first hour of racing.

Holmes again claimed maximum three points, over the similarly shaped Côte de la route des Crêtes (category 3) before the wind picked up, creating the risk/opportunity for echelons and waking up the peloton. This injection of impetus caused the duo’s advantage to fall precipitously and, with 73km remaining, the echapee was absorbed by the bunch.

27km later an attack by Frederik Frison (Lotto Soudal) triggered a response from Yevgeniy Federov (Astana Qazaqstan) and Alexis Gougeard (B&B Hotels-KTM) and a second break of the day formed, and was permitted to establish a limited lead. Back in the bunch a moment of inattention resulted in a touch of wheels, which caused several riders to crash, and brought the race of Felix Grossschartner (Bora-Hansgrohe) to a premature end.

Through the first intermediate sprint point and onto the 16.7km finishing circuit the trio held just over a minute on the peloton.

The first time under the kite gave us a look at what would be the final kilometre. Under the second intermediate sprint, the breakaway held onto 30 seconds and the race seemed to be heading towards a “normal” finale in Mantes-la-Ville.

That was until, on a long, straight road, 12.5km out, Jumbo Visma took over at the front. Their first act of aggression was enough to bring the race back together. Their second blew it apart. With Nathan Van Hooydonck leading the race along exposed roads, the race strung out and was soon in pieces. The first notable casualties to be shelled were Ethan Hayter (Ineos Grenadiers) and Cees Bol (Team DSM) before we watched as favourites Dylan Groenewegen (Team BikeExchange – Jayco) and Fabio Jakobsen (QuickStep AlphaVinyl) found themselves going backwards and their chances of taking the stage win up in smoke.

On the final categorized climb, the Côte de Breuil-Bois-Robert, more hard riding from Jumbo Visma was enough to set themselves up for the stage win. With 5km to go it had turned into a team time trial, with new boy Christophe Laporte, Primoz Roglic and Wout van Aert, in his Red Bull helmet and Belgian national bands, fighting at the front to sew the race up long before the finish line.

With 3km to go the trio rode at 65kph, and held 15 seconds over the rest, as the remaining teams struggled to organise. At 2km it was up to 20 seconds. By the flamme rouge it was all over. Roglic gave Laporte the nod to cross the line first and the three lifted their arms to celebrate as one

For Laporte it was his first win in Jumbo colours, in just his second ride for the team.

“With one kilometre to go they told me that I would win the stage,” he said afterwards.

“Welcome to the team!” Rob Hatch exclaimed on commentary for Eurosport as Laporte clinched victory.

Pierre Latour came home three seconds ahead of the bunch, which finished a further 19 seconds later. Bonus seconds for the first three places mean Jumbo Visma are well and truly in control of the general classification.

Laporte’s victory also gave him the lead in the points competition, while Matt Holmes early efforts were rewarded with the king of the mountains jersey. As the first young rider to cross the line, Biniam Girmay will wear the white jersey tomorrow.