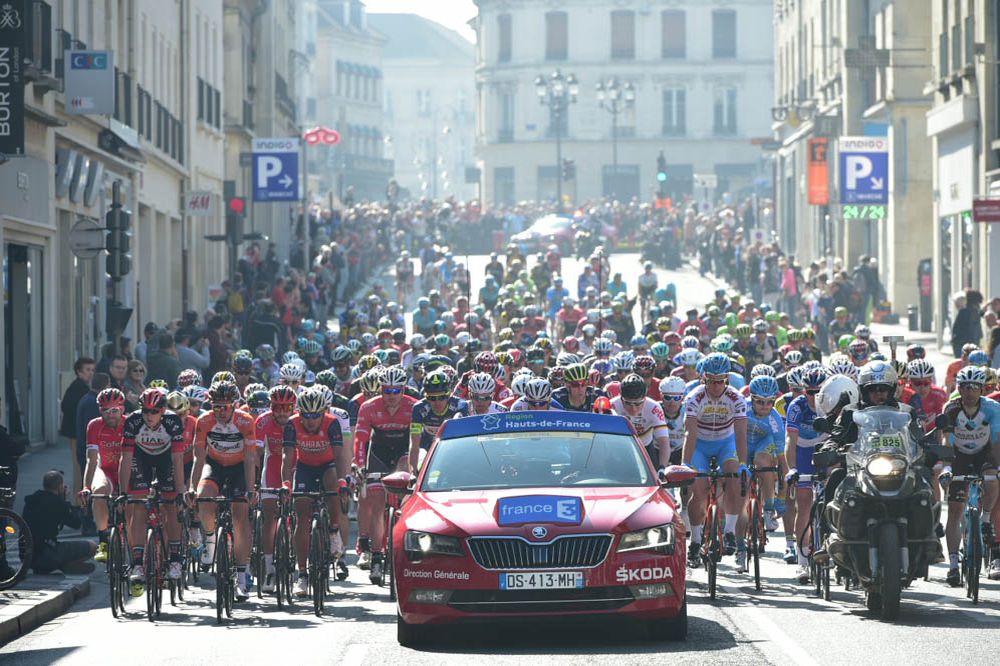 Meanwhile, Cannondale-Drapac’s Sebastian Langeveld rounded out the podium in third.

Van Avermaet, Stybar and Langeveld succeeded in riding clear from a six-man breakaway group along the cobbled section of the Carrefour de l’Arbre.

From there, the duo remained out all the away to Roubaix, while Trek-Segafredo’s Jasper Steven and Team Sky’s Gianni Moscon managed to rejoined the two leaders during the final lap around the velodrome.

Heading into the last 100 hundred meters, Stybar was the first rider to open up his sprint, only to see Van Avermaet match his acceleration and come around him during the waning moments of the race to seize the victory.

Michael Delage (FDJ), Jelle Wallays (Lotto-Soudal) and Yannick Martinez (Delko Marseille Provence KTM), marked the the day’s first breakaway group, subsequently opening up a slight lead of around a minute over the peloton.

However, after the first section of cobbles Martinez decided to fall back into the peloton, only to be replaced by Stijn Vandenbergh (AG2R-La Mondiale).

After the Arenberg, Sylvain Chavanel (Direct Energie) briefly joined the leaders, before they were swept up by the peloton just a few kilometers later.

A series of crashes later plagued the peloton, ensnaring such riders Van Avermaet,  Ian Standard (Team Sky), Iljo Keisse (Quick-Step Floors) and Alexander Kristoff (Katusha-Alpecin).  However, all of them managed to find their way back to the peloton.

Around the 70 kilometer mark Peter Sagan (Bora-hansgrohe) made a move with his teammate Maciej Bodnar and managed to position himself at the front of the race along with Jasper Stuyven (Trek-Segafredo) and Daniel Oss (BMC). But some meters later the world champion punctured after which both he and his teammate were caught by the peloton.

The duo rode on together until 45 kilometers from the finish line, when a trio conformed by Jurgen Roelands (Lotto-Soudal), Dimitri Claeys (Cofidis) and Gianni Moscon (Team Sky) jumped from the main bunch to join them in front.

Soon after that Oss showed that he still had the legs to escape and went away solo getting a gap of more than 30 seconds. Behind him the peloton split and Van Avermaet, Stybar, Langeveld, Roelandts, Stuyven and Moscon went to the chase for the Italian rider.

He was eventually caught and the seven pulled faster in the front trying to leave behind a group with stronger men like Boonen, Degenkolb, Naesen and Sagan. After the last cobbled section of five stars, the most difficult level, only Langeveld, Van Avermaet and Stybar remained in the lead.

The trio entered the velodrome and slowed down to see who launched the sprint first until they were caught by Moscon and Stuyven. Moscon was the first to accelerate, followed by a very strong Stybar.

The former cyclocross rider had a small advantage over Van Avermaet, but the Belgian made a last big effort and surpassed him at the last moment.