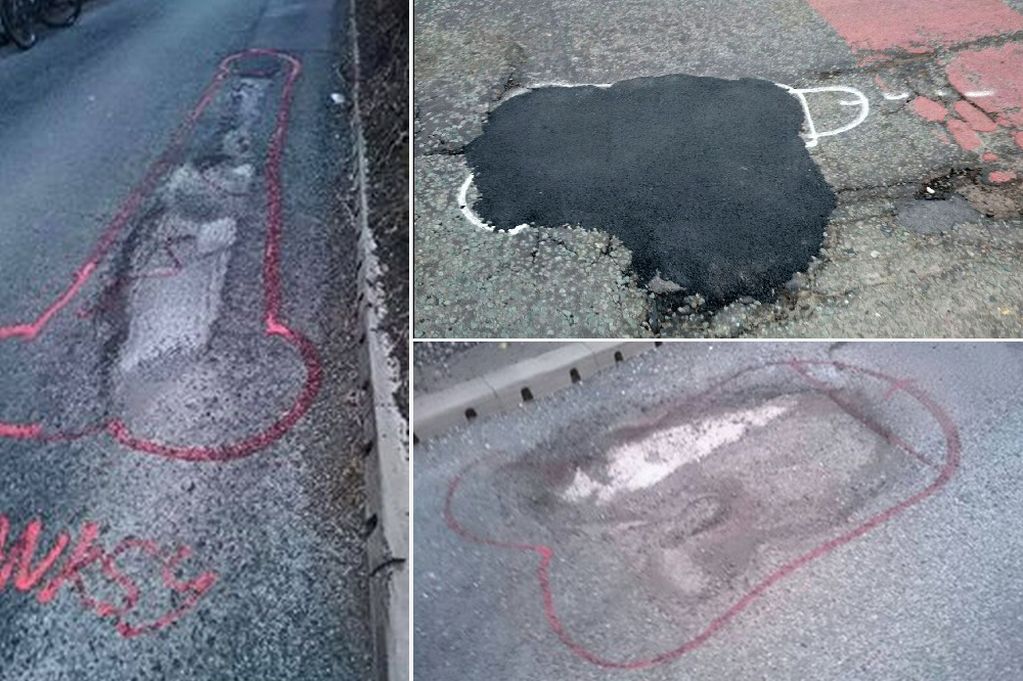 A cyclist in the UK, who’s angry about the proliferation of potholes that mark the areas cycling routes, has decided to lash out at the local government with an anti-pothole campaign, albeit with an artistic twist.

A man who goes by the name Wanksy, says his artwork began yielding results in the town of Ramsbottom, after one of his “graffiti penises” prompted the local council to quickly fix the pothole and cleanup the eye-catching wanker.

Wanksy told the local newspaper: “The roads of Manchester are in an appalling state, especially around Bury. I have cyclist friends who have been hospitalized.

“They damage vehicles. Sometimes it’s hard to know which pothole caused the damage because there are so many. When I’ve finished in Ramsbottom, I’ll move on to the rest of Manchester.”
He went on: “I wanted to attract attention to the pothole and make it memorable. Nothing seemed to do this better than a giant comedy phallus. It’s also speedy, I don’t want to be in the road for a long time.

“It seems to have become my signature. I just want to make people smile and draw attention to the problem. It seems to be working, judging from the Facebook fan page.”

Wanksy says his graffiti is getting results, whereby a pothole is usually filled with 48 hours to a week, whereas, in the past, some potholes have been left unattended to for years.

“Some still remain, it’s not a 100 per cent success rate, but it works. I’m inspired by the alternative style displayed by artists such as Grayson Perry and of course by graffiti artists like Hazer and street artists especially Banksy.

“It has a message that people get, but also has a bit of comedy value. Hopefully mine does too.

“However, unlike these artists I want my work to be destroyed, I like it when it gets dug up and replaced with fresh tarmac.”

However, a spokesman for the local council described the graffiti as “obscene” and said that removing it was diverting resources from road repairs.

He said: “The actions of this individual are not only stupid but incredibly insulting to local residents.

“Has this person, for just one second, considered how families with young children must feel when they are confronted with these obscene symbols as they walk to school? Not only is this vandalism, but it’s also counter-productive.

The spokesman, who urged anyone catching the street artist in the act to contact police, went on: “People are entitled to express their grievances to the council, but offending the public and wasting their council tax is not the way to resolve the situation.

“Painting obscenities around potholes will not get them repaired any quicker, but simply waste valuable time and resources.”

So far, there’s been no reports of any “penial potholes” appearing on the streets of America. But, one never knows when a crafter of phalluses may pop up.