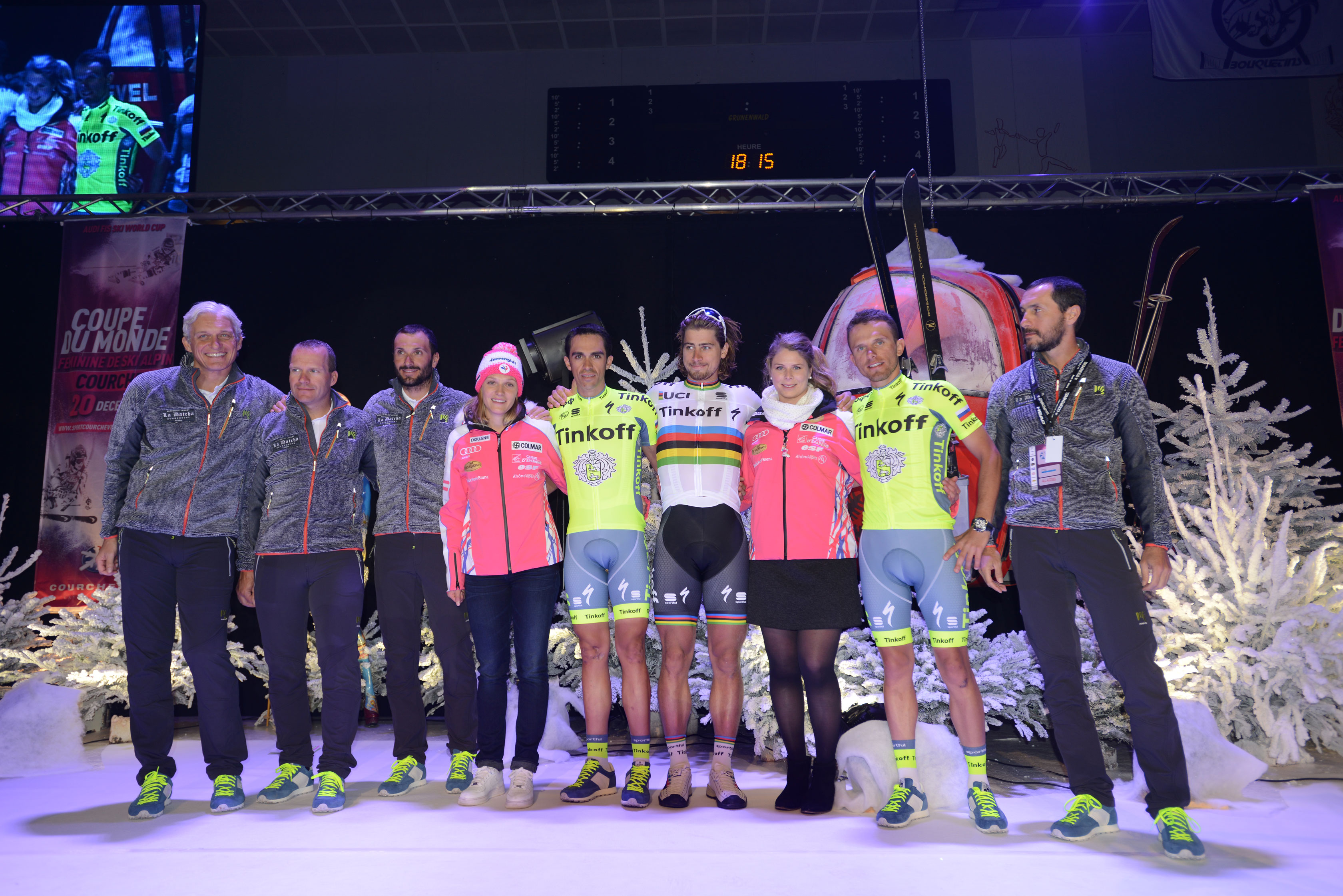 22 Dec 2015
By Gianni Pericolo - In LATEST ARTICLES, THE GREAT RACE

Following Tinkoff-Saxo’s recent team kit presentation in Courchevel, Peter Sagan took to the slopes at the famous Saint-Bon-Tarentaise ski resort, to take advantage of some fun.

The video shows the World Champion displaying some impressive moves on the slopes, as he carved his way down the Alps.

Alberto Contador, Peter Sagan and Rafal Majka took to the stage at the packed Courchevel ice rink during the bib draw of the Audi Fis Ski World Cup – Ladies Alpine competition to present the highly-anticipated race kit for the 2016 season.

Contador, Sagan and Majka stole the show in Courchevel as they rode their bikes on the ice rink, in front of thousands of ski fans, to the central stage where they addressed the crowds and unveiled the team’s 2016 race kits.

The race kit Tinkoff riders will don in 2016 incorporates the state-of-the-art BodyFit technology by Sportful and doesn’t break with the recent past, following instead an evolution of its yellow and blue colors, with minor design tweaks.

The team’s signature fluo yellow takes a more prominent position on the jersey as does the name of the 2016 naming sponsor, Tinkoff Bank. Being the largest purely online bank in the world by the number of clients, Tinkoff Bank is now working on becoming a universal financial marketplace with a focus on mobile services. The Tinkoff crest now takes center stage, at the front and back of the jersey.

The most marked color change takes place on the shorts where gray-blue becomes predominant and yellow is present in the form of a stripe at the bottom of the thigh.

Peter Sagan, unveiled his eagerly-anticipated World Champion kit, wearing the white rainbow jersey and black shorts with the rainbow bands at the bottom of the thigh.

All Tinkoff fans wishing to get their hands on the brand new kit can do it on the team’s official webshop at www.tinkoffsportshop.com

According to Stefano Feltrin, “this presentation marks the start of the 2016 for Tinkoff. With some of the world’s best riders in our team we have a challenging but ambitious year ahead of us. Alberto, Peter and Rafal will tackle the world’s most prestigious races and thanks to Sportful, they will do it in clothing that combine style and performance”.

“Sportful are excited to continue our work with Tinkoff as we head into the 2016 race calendar. Our partnership with the team allows us to develop some of the most technical clothing in the peloton, finding new ways to make Tinkoff riders the best equipped for every weather condition and every race”, commented Glen McKibben, Brand Manager at Sportful.

“The team has been vital in helping us to continue to provide innovative technical cycling apparel and we are proud to contribute to the continued success Tinkoff”, concluded McKibben.

The new jersey will make its debut in mid January, when Tinkoff’s riders take on Tour Down Under and Tour de San Luis.