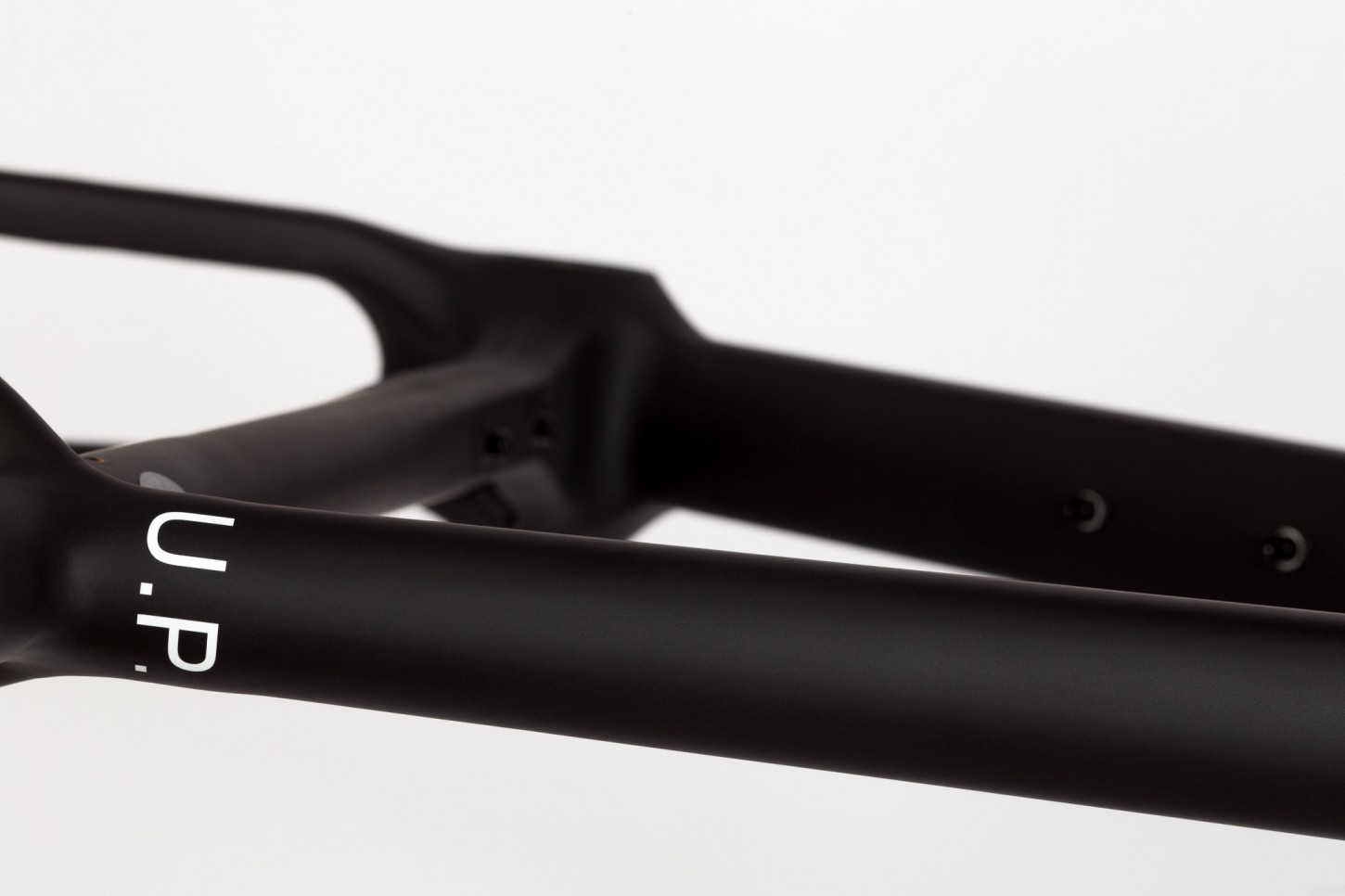 Rapha has announced the launch of a special edition of OPEN Cycle’s U.P. (Unbeaten Path) adventure/gravel bike frameset, to celebrate its expanded range of Brevet clothing for this season.

Sold as a frameset only, which is only being offered to Rapha Cycling Club members, the special edition U.P. frameset features a black finish with Rapha’s logo in white along the top tube, along with OPEN’s name and signature colors around the base of the head tube.

OPEN’s U.P. was one of the first bikes to capitalize on the adventure cycling/gravel grinder segment, offering a range of versatility for both on-road and off-road riding conditions – with tire clearances up to a massive 55mm, as well as the ability to accommodate regular road wheels, 29er mountain bike wheelsets and the currently fashionable 650b road plus.

The U.P.’s frameset is comprised of carbon fiber, and it features any array of unique tube profiles and shapes such as skinny seat stays designed to provide more vertical compliance, a squared-off down tube for maximum stiffness and a 27.2mm seatpost for further compliance.

In addition, the frame routes all cables internally using OPEN’s MultiStop design, which can accommodate any mechanical or electronic groupset, to include either double or 1X chainrings.

Both front and rear thru-axles are also featured on the Rapha U.P., along with OPEN’s ThruThread design which serves to lock both the thru-axle and rear derailleur hanger to the frame.

According to Rapha, the frameset is available in four sizes, and it comes equipped with 3T’s Luteus II Team fork.

A bike to be ridden anywhere

For the launch of the Brevet collection in 2016, three riders took OPEN’s new U.P. to South Africa to explore part of the route of the Tour of Ara, where they were met with endless dirt roads, steep mountain passes, and relentless corrugations. For the latest Brevet launch, OPEN’s U.P. was chosen to explore the difficult and mountainous terrain of South Tyrol in northern Italy, where it excelled once more.

OPEN’s U.P. (Unbeaten Path) has been designed to excel in all kinds of terrain. Utilising road geometry with clearance for 650b mountain bike tyres, it is equally at home on gravel tracks as it is on tarmac. We spoke to Andy Kessler, co-founder of OPEN, about their latest offering, and how the U.P. came to be.

Where did the idea for OPEN come from?

My business partner Gerard and I have worked in the bicycle industry for 25 years. He has been designing bikes since university, when he made a time trial bike for the Olympics. We’ve seen the industry grow a phenomenal amount from the inside, but began to notice that many bike manufacturers were becoming distant from their products and customers.

Both Gerard and I worked at Cervélo together, and after I left the company, Gerard called me and said he’d also left. We decided to do something really small and really special together, with a focus on innovation.

The bikes you produce are certainly different. What inspired the U.P.?
Our mountain bike frame (the hardtail O-1.0) was the first bike to have integrated cables, and now, everyone uses them. For us, it’s important that we do it differently to all the others. There’s so many disciplines – gravel, cyclocross, road, mountain, and with the U.P., we wanted to create a bike that was so versatile it couldn’t be categorised. One of the main ways it does this is by accommodating two wheel sizes.

Your strategy is quite different. Can you explain the philosophy behind staying small and not advertising?
I don’t want to sound like a philosopher, or an alcoholic, but I often compare OPEN to beer. In Switzerland, five years ago, everyone drank Heineken, or other large brands that were owned by them.

Now, there are so many small independent brands that are thriving, and that have interesting stories. And that’s us. People are searching for stories. They want to feel connected to the brand.

What’s next for OPEN and the U.P.?

We’re not a hipster brand – we’re just two older guys that have a passion for performance. With the U.P., everyone meets across disciplines and categories; it’s kind of nice that the road guys, the mountain bike guys, and the performance guys can all come together and explore new elements of their riding. It’s a very positive category all of its own. We’ve won some awards, and have found that people are looking for the U.P. before our partners have even heard of it. There’s a positive buzz, and it’s very exciting.