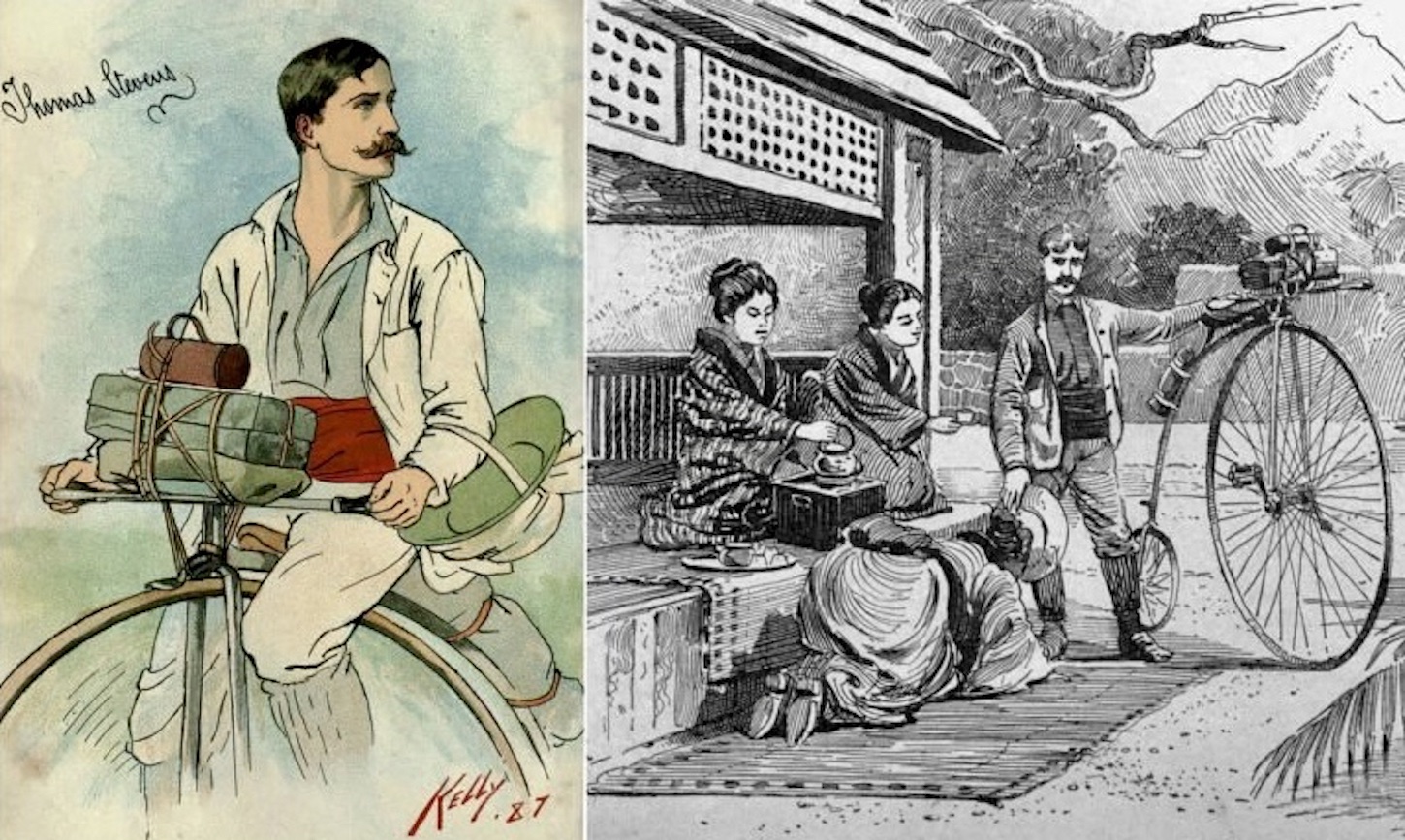 20 May 2020
By Gianni Pericolo - In FEATURED ARTICLES, LATEST ARTICLES, VELOPATHIC

Bicycle historians credit Thomas Stevens as the first man to circle the world on a bicycle. But, to most cycling enthusiasts, his journey remains virtually unknown.

Stevens was born in Great Britain on September 24, 1854, the eldest son of a working class family. It became apparent early on that he loved sports and that there was a little adventurer and writer in him. His father emigrated to the USA on his own early on, with the plan being that the rest of the family would follow soon. But before this happened, Thomas Stevens’ mother fell seriously ill and his father returned to the family.

However, in 1871, Stevens himself had saved enough money to emigrate to the USA by himself, so he packed his belongings and set off on his adventure by ship. Two years later, his parents and brothers managed to follow him. But Thomas Stevens would never stay with his family for too long, and shortly thereafter he moved on to San Francisco, where he learned to ride a penny-farthing, one of the first types of bicycle.

Stevens later found a job in a Wyoming railroad mill, where he stayed for two years before he got chased out of town because he imported British workers and took part of their salaries for the favors he did for them. Later, he started working in a Colorado mine where he got the idea to ride a bicycle across the States.

Everything started in 1884 when Stevens bought himself a penny-farthing. It was a 50-inch black-enameled Columbia Standard bicycle with nickel-plated wheels, made by the Pope Manufacturing Company of Chicago. Tom packed his handlebar bag lightly; he only took some socks, a spare t-shirt, a raincoat that he also used as a tent and bedroll and a small pocket revolver.

After putting everything in order, he hopped on his bicycle and left San Francisco at 8 o’clock on April 22, 1884. He reached Sacramento, and after that, his journey took him across the Sierra Nevada Mountains to Nevada, Utah, and Wyoming. On every stop, Steven was greeted by members of local bicycle clubs. Finally, on August 4, 1884, after 103,5 days, he reached Boston and the East Coast of the United States, thus, making the first transcontinental bicycle ride.

Harper’s made a report on his effort:

“More than one-third of the route followed by Mr. Stevens had to be walked. Eighty-three and a half days of actual travel and twenty days’ stoppage for wet weather, etc., made one hundred and three and a half days occupied in reaching Boston, the distance by wagon-road being about 3,700 miles. He followed the old California trail most of the way across the plains and mountains, astonishing the Indians, and meeting with many strange adventures.”

During his tour through the United States, he repeatedly wrote articles for magazines in which he described his adventures. This brought him to the attention of bicycle manufacturer Albert Pope, who agreed to finance a trip around the globe for Stevens, who, of course, couldn’t refuse such an offer.

With his journey, Stevens made foundations for a new way of traveling – one that didn’t involve rifles and a whole expedition – traveling just for the sake of visiting a place, hiking and meeting new cultures. Thomas Wentworth Higginson, a member of the Massachusetts Bicycle Club, heard Tom’s speech and stated the following:

“Instead of going round the world with a rifle, for the purpose of killing something – or with a bundle of tracts, in order to convert somebody – this bold youth simply went round the globe to see the people who were on it; and since he always had something to show them as interesting as anything that they could show him, he made his way among all nations.”

The magazine decided to make him a special correspondent and sponsored his trip to Liverpool – the starting point for his new journey. After arriving in Great Britain, Tom went to London to arrange his trip across Europe and the returned to Liverpool. On May 4, 1885, Stevens began his journey with a formal start at Edge Hill Church, Liverpool. He cycled across Britain and symbolically passed trough Berkhamsted, his birthplace. Then, Stevens took the ferry from Newhaven to Dieppe and arrived in France.

From France, Stevens cycled through Germany, Austria, and Hungary. In Hungary, he was joined by another cyclist who didn’t speak English and rode with him for a while. From Hungary, Stevens continued cycling through Slavonia, Serbia, Bulgaria, Rumelia, and finally arrived in Constantinople (Istanbul), Turkey – the final destination of his European journey.

Constantinople, or modern-day Istanbul, is the cross-over point between Europe and Asia. This was a nice starting point for Stevens’s plan to pedal across Asia. Here he took some well-deserved rest, obtained spare spokes for his bicycle and bought himself a new pistol. Soon he headed off and passed through Anatolia, Armenia, Kurdistan, Iraq and made it to Teheran, Iran where he was invited to stay for the winter as a guest in the Shah’s palace.

Steven’s initial plan was to cycle through Siberia, but after being denied a passage, on March 10, 1886, he went to Afghanistan where he was again denied to pass. Being unable to go in that direction, Thomas returned to Constantinople and took a steamer to India.

Stevens described his trip through India as pleasant. Besides the weather being always hot, he noted that the Grand Trunk Road was in good condition for cycling and it was free of bandits. From Calcutta, he boarded a steamer that took him to Hong Kong. Here he began his journey through China. When he reached the coast, Thomas took another boat to Japan. He immediately fell in love with the country. It was calm and beautiful to cycle around. Japan was also the end of Tom’s bicycle tour across the world. His bicycle Journey ended on 17th December 1886, in Yokohama. From Japan, Stevens took a steamboat back to San Francisco. The last entry in his travelogue says: “DISTANCE WHEELED, ABOUT 13,500 MILES.”

After his bicycle journey, Stevens continued living an adventurous life. Up until 1895, he made several other trips in different places around the world.

Stevens later moved back to England and settled down as the manager of the Garrick Theatre in London.