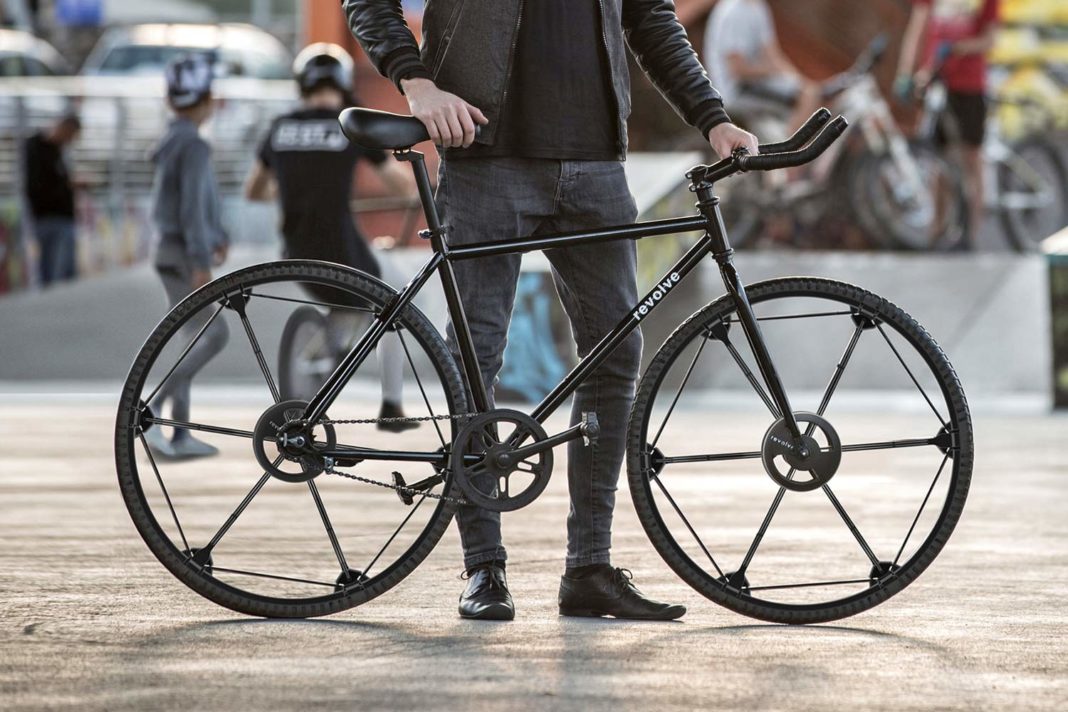 Engineers and designers have once again demonstrated that some of the most exciting and innovative bike products continue to emerge out of the urban cycling segment.

A strong case for this, is the Revolve Folding Concept Wheel, which further extols the belief that the bicycle can provide one of the most  practical and efficient means for traversing the urban landscape, and explains why it continues to be a key fixture in a vast majority of progressive transportation modalities.

Created by Andrea Mocellin’s the Revolve Wheel is as visually striking to look at, as it is to witness its function, which features an airless, puncture-proof and foldable design that’s compatible with virtually any style of folding bike.

According to Mocellin, his inspiration for developing the Revolve Wheel was influenced by the growing trend of foldable bikes, which are typically limited as to how small they can be compacted by virtue of the size of their wheels.

However, given its modular structure, the hexagonal Revolve Wheel can fold down into a compact pod, allowing cyclists to simply carry it or stow it away for easy portability.

When in functioning mode, the Revolve Wheel opens up into a full-size 26-inch spoked wheel that can be used in conjunction with both folding bikes and wheel chairs.

“It has been three years of complete immersion in the project,” says Mocellin “I didn’t design a wheel for single bicycle, but a wheel for many different products that can have the same full-sized bicycle wheel, but can now be folded and reduced in size in many different ways.” “It was conceived as an enabling technology, and when folded, the side wheels that can be added as either traditional wheels or omnidirectional wheels are also designed to enable new ways of making better folding vehicles that can be used and transported in different ways. The aim is to offer the enabling technologies to open new frontiers for the future of foldable vehicles.”

Having lived in several, large metropolitan cities such as Shanghai and New York, the Revolve Wheel has received more than its fair-share of field testing, particularly when it comes to trains, subways and airports.

“I have experienced so many folding bicycles with small wheels that are not only complicated and ugly when they are closed, but difficult to transport” said Mocellin. “I wanted to ensure my wheel was beautiful to look at when it was closed.”

“The people who will use my wheels not only overcome the challenges of navigating complex transportation hubs, but will also be able to store their bicycle inside their apartment, and they do not want ugly folded bicycles to be stored inside their living space.”

“So I worked hard to get a nice form factor … like an audiophile speaker or a sculpture”, adds Mocellin.

Why did Mocellin choose a 26 inch wheel?

“I many times got really annoyed with existing folding bikes because when they are small and light, they invariably have small wheels, and that severely limits what they can do. In an urban environment, there are gutters and steps and cracks in the pavement and obstacles that are a problem for small wheels … and I also wanted the speed and practicality of a large wheel.”

“It might still be possible to ride a folding bike with small wheels, but the feel of the bike is the key to whether the customer is happy, and that’s the most important thing.”

“If you want to do sports riding, or off-road riding, you need to have larger wheels. If you have large wheels, you can basically have a racing bicycle that can be stored in hand luggage on an airplane.”

“The airless tires we use are very practical and entirely comfortable in every condition and we are by no means limited in any way in the tire of tread that can be used. It’s very easy to use different tread patterns on these wheels that are suited for different surfaces.”

How will the Revolve Wheel get past the prototype phase and into production?

“In the beginning, I anticipate that we will sell just the wheel, so that it can be used by other companies in their designs for folding vehicles.”

“I am entirely independent at this stage and I’ve spent three years working in secrecy to bring the product to this point … so my next month is about explaining to the world what is now possible with folding vehicles and we shall see how things evolve from there.”

“I expect the most important market segment initially will be for wheelchairs. People with disabilities who wish to travel have no choice – they must take their wheelchair with them, and traveling with a wheelchair is very difficult, be it on an aircraft, or in a car, on the underground, anywhere.”

“Helping people with disabilities to have an easier life is one of the key goals of the project, and I expect that once the inventors of the world have seen the components I have developed, there will be some ingenious solutions developed in short order.”

What are Mocellin’s long range pans?

“Quite clearly there are many different ways in which the folding wheel can be used, and folding bicycles and folding wheelchairs are just the low hanging fruit. Wheeled drones that need to be transported in a compact state are another marketplace with great potential and … now that wheels can be folded, people will find uses for them.”

“I think the primary aim, in the broadest sense, is for Revolve’s wheels to become a signature product for global travelers. To see our distinctive form factor used on the highest quality travel products.”

You can learn more about the Revolve Wheel by visiting Mocellin’s website here.