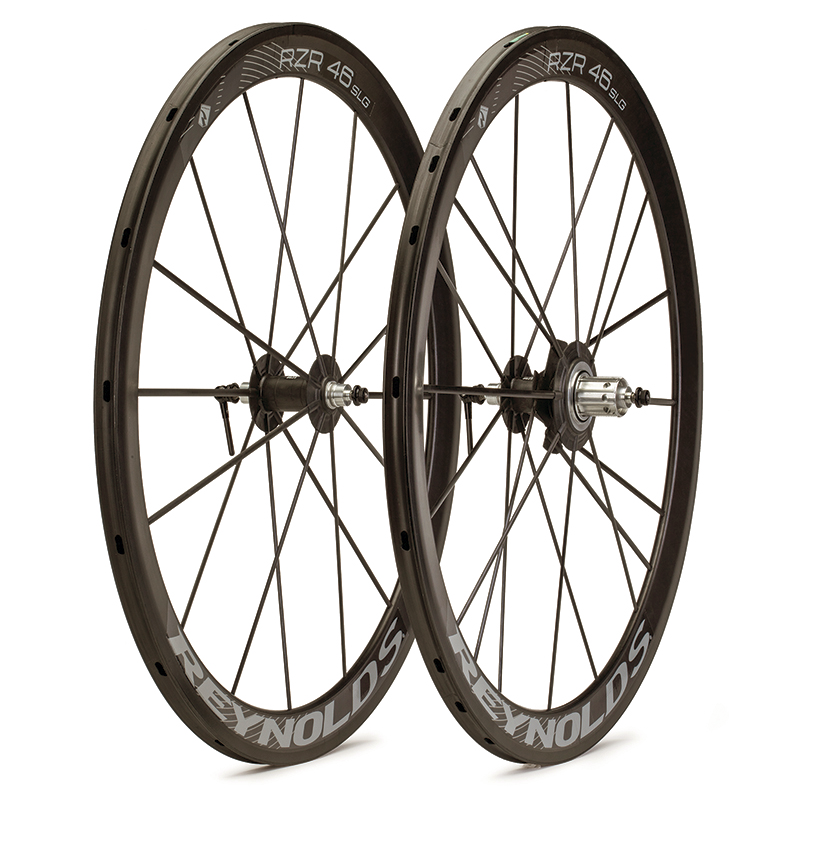 27 Jul 2015
By Gianni Pericolo - In LATEST ARTICLES, THE DOUBLE DIAMOND

Over the last few years, I’ve shied away from deep section aero wheels over concerns regarding instability during windy riding conditions. I’m a Tom Cruise size guy (only, according to my wife, I’m much better looking 😉 ), and on many occasions in the past, when riding deep profile wheels, my bike and I became a veritable “sailboat” on windy days. So, for that reason I’ve been riding wheelsets that feature a low profile rim section. And, while most of them have offered excellent performance in the way of versatility and lightweight, given their lack of aerodynamic properties, my ability to stay onboard with the most spirited of “group rides’, or an occasional race, has at times put me at a deficit.

However, as of recent, I was asked to test ride the Reynolds RZR 46 tubular wheelset for a few days. Reluctantly, I accepted. And, I say reluctantly, only because it’s been windy as all get-out here in New England – since the start of the Summer.

At first glance, suffice to say, that the overall construction and “design language” of the RZR smacks of the German brand – Lightweight. That is to say, similarly, they feature a full carbon approach to the design of the rim, spokes, hubs and flanges. However, the RZR boasts a complexity of features unlike other wheels of their kind. For example, NACA profile spokes, propriety braking surface technology, additional spoke flanges that encourage even distribution of applied torque, specific rim profiling to increase aerodynamics, those are just a few things that add to their sophistication. But, there’s plenty of information to on Reynold’s website regarding the technology behind the RZR’s design, so I’ll leave that up to individual readers to pursue.

In any case, held-in-hand, the RZR’s exhibit an overall level of fit and finish and quality that is rivaled by very few, along with a structural feel that puts them on par with that of a dump truck. Minus the weight of course.

How Did They Perform ?

To start, the RZR’s were shod with a pair of 23mm Mavic YKSION tubulars, which are essentially Tufo’s in “French clothing”. Happily, they mounted with near perfect “run-out”. And, vulcanized tubulars have always been my tire of choice.

From there, the wheels were mounted onboard BH’s flagship Ultralight frameset, which was equipped with Shimano Di2, along with various and sundry cockpit pieces. Readers will also notice that the bike was equipped with Pioneer’s new high-brow power meter. But, since I’m not a power meter kind of guy, I would have gladly have swapped it for their receiver, turntable and speakers instead.

As far as the BH is concerned, this was not the first time riding the Ultralight. But, rather than get into a discussion about it, I’ll simply say that it’s an extremely solid and well balanced frame, yet it’s also very lively and spirited as well. But, that’s another review.

My first time out on the RZR’s, was during a leisurely evening ride, which provided the perfect setting for me to become acquainted with the wheels, as well as the overall set-up.

My first impression of the RZR”s was one of surprise. I was quickly taken back by how comfortable and well-mannered they performed; particularly over rough pavement and potholes that were unavoidable. Thinking back to past experiences, these were not traits typical of deep section wheels.

My second excursion, involved much faster riding, with a perfect assortment of climbs, descents and undulating roads – enough to put any wheelset to task.

The RZR’s performed admirably, exhibiting an excellent sense of balance and poise, proper feedback, perfect braking, great acceleration, and all the while, still demonstrating a high level of comfort. Indeed, these were unique characteristics for sure, I thought. But, the true test was still to come – a windy day !

There’s been no shortage of wind in and around the hills and valleys of western Massachusetts as of late. In fact, the morning that I set out for a ride, my seasonal screen room got crippled in a mighty wind. So, needless to say the stage was set.

As I departed on my ride, I fully expected to be battered about roadway like a discarded shopping bag. Curiously, however, that was not the case. In fact, with each mile that I put behind me, the more I came to admire the stability and predictability of these wheels. But, let me be clear, as with any wheelset that features a sizable rim section, there definitely needs to be a heightened level of concentration and awareness when riding in strong winds. However, with the RZR’s, gone were the days of “white-knuckle” riding, as I had previously experienced with other lightweight aero wheels. And, with the exception of extreme crosswinds (the kind that no wheel or bike is immune from), the wheels maintained a great deal of composure throughout my windy ride.

The RZR’s certainly proved to be a very versatile wheel. They can ascend with seemingly unrestrained gravity, while also being able to descend with seemingly unconstrained conviction. They’re both smooth and comfortable, and devoid of any of the harsh riding symptoms that I’ve come to expect from aero wheels. But, perhaps, most importantly, they’re capable of generating gobs of momentum ! That’s where the RZR’s really shine !

In sum, the Reynolds RZR 46 wheelset demonstrated all of the qualities that I hoped to discover; namely, a perfect balance between lightweight, unsprung rotational mass and solid construction, excellent braking, a high level of comfort, and they inspired me with confidence with each turn of the pedal. But, then there’s the magic that’s involved in the research and design of RZR’s that only Reynolds truly knows. And, as enthusiasts, we trust in that.

Highly recommended for cyclists who want a super lightweight, fast and strong set of wheels !