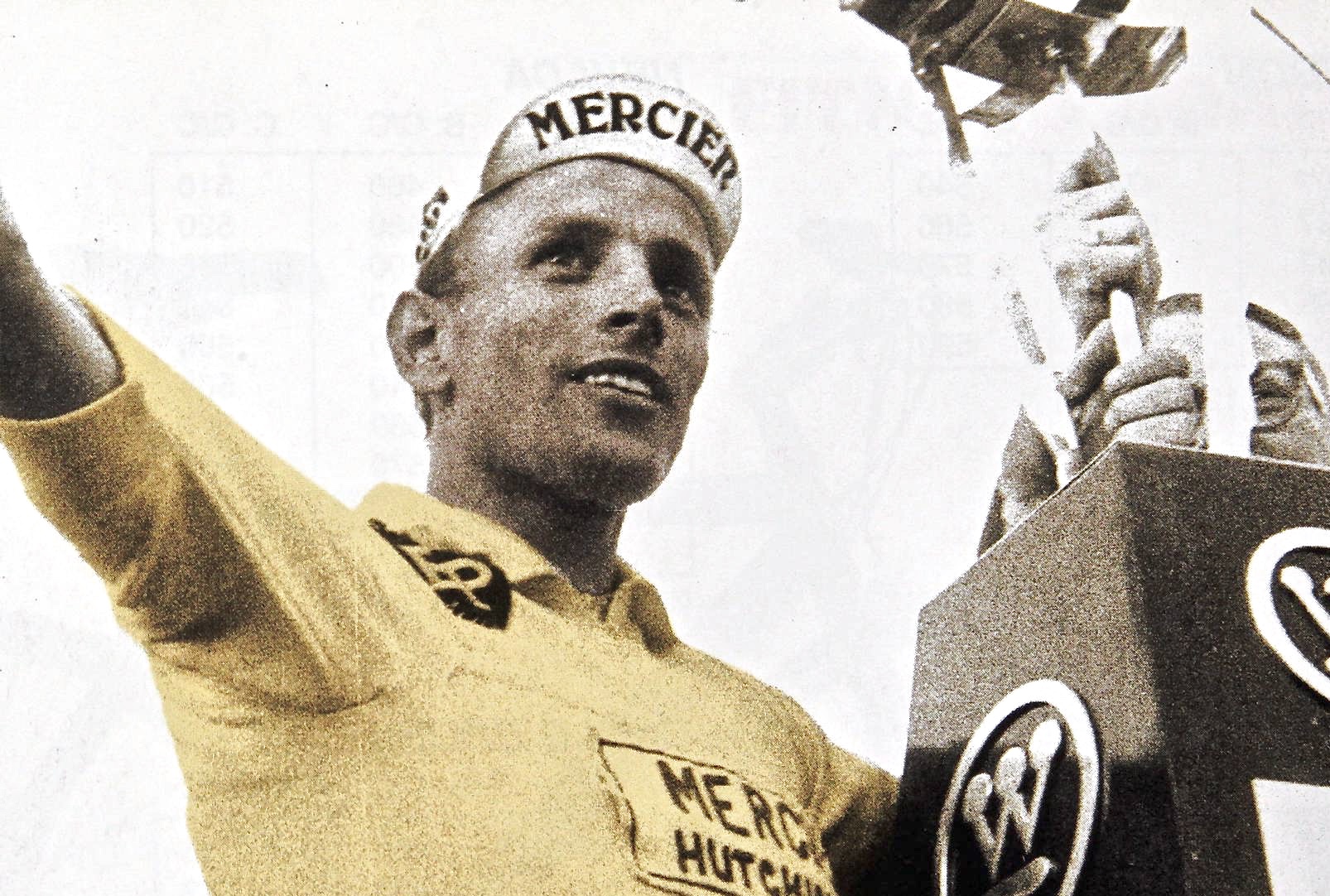 A belated happy birthday to Rolf Wolfshohl, who was born on December 27, 1938.

The German rider is best known for winning the 1965 Vuelta a España in front of Raymond Poulidor of France and Rik Van Looy of Belgium.

In addition, Wolfshohl also finished fourth in the 1962 World Championship Road Race behind Jean Stablinski of France, Seamus Elliott of Ireland and Joseph Hoevenaers of Belgium.

He also captured both the West German National Cyclocross and Road Championship titles as many as fifteen times, as well as the World Cyclocross Championship on three occasions.

Wolfshohl began competing as a junior rider, winning his first race at the young age of 15 in 1954. Just two years later, he won the Junior Road Championship of West Germany.

This caught the attention of the director of the Dortmund velodrome, Otto Wederlin, who was intent on turning the fledgeling pro into a Six-Day track rider. However, Wolfshohl decided to remain focussed on cyclocross and road racing.

This proved to be a wise decision on Wolfshohl’s part, as he went on to win no fewer than twelve medals in the fifteen National and World Cyclocross Championships he raced in between 1957 and 1973.

He reprised his victory the following year in Hanover, West Germany.

Critics initially complained that the course had been designed to favor the defending champion, so cycling’s governing body decided to step-in and make it even more difficult.

Nevertheless, Wolfshohl’s performance was unassailable. And, despite a valiant attempt by Longo to close down on the young German rider during the penultimate lap, he lead the race from start to finish

However, he emerged healthier the following season to win the Gold Medal in Calais in France, creating a gap early on in the race that easily vanquished any challengers.

With three Gold Medals now to his credit, Wolfshohl decided to focus more on road racing, using cyclocross as an off-season training regimen.

Racing for the prestigious Rapha-Gitane team, Wolfshohl just missed out on winning the 1962 Liège–Bastogne–Liège, after losing to Jef Planckaert in a two-man sprint. He finished seventh in La Flèche Wallonne the next day.

Yet, because both Belgian races were held on successive days under the banner Le Weekend Ardennais back then, his cumulative efforts earned him the overall title.

Wolfshohl just missed out on winning the early-season Milan–San Remo Classic in 1963, after he was beaten by Joseph Groussard in the sprint.

In fact, the finish was so close, he was initially declared the winner. But, upon closer inspection, race officials later awarded his French rival the victory.

Wolfshohl’s greatest achievement came in 1965, after winning the Vuelta a España. He initially set-out in support of fellow Mercier teammate and defending champion, Raymond Poulidor. But, the loyal domestique proved to be much stronger than his veteran team leader, subsequently taking the leader’s jersey from Poulidor during the eighth stage and on to victory with a six minute advantage.

In other Grand Tour events, Wolfshohl won two stages in the 1967 and 1970 Tour de France, and briefly wore the maillot jaune (yellow jersey) during 1968 race – before crashing on stage 16.

In 1968, he also won Paris–Nice, beating Ferdinand Bracke by a mere three-seconds, marking the narrowest margin ever in the Race to the Sun.

In total, Wolfshohl won an astonishing 140 road races and 110 cyclocross during his 15 years as a pro.

Wolfshohl retired from racing in 1975, and opened a bike shop in his native region of Germany.

From 1995 to 2000, he was involved in the organization of the Rund um Köln, which is traditional road race that’s held each year around the German city of Cologne.

The Rund um Köln is the second-oldest race in Germany, just after Rund um die Hainleite, which was first held in 1908.