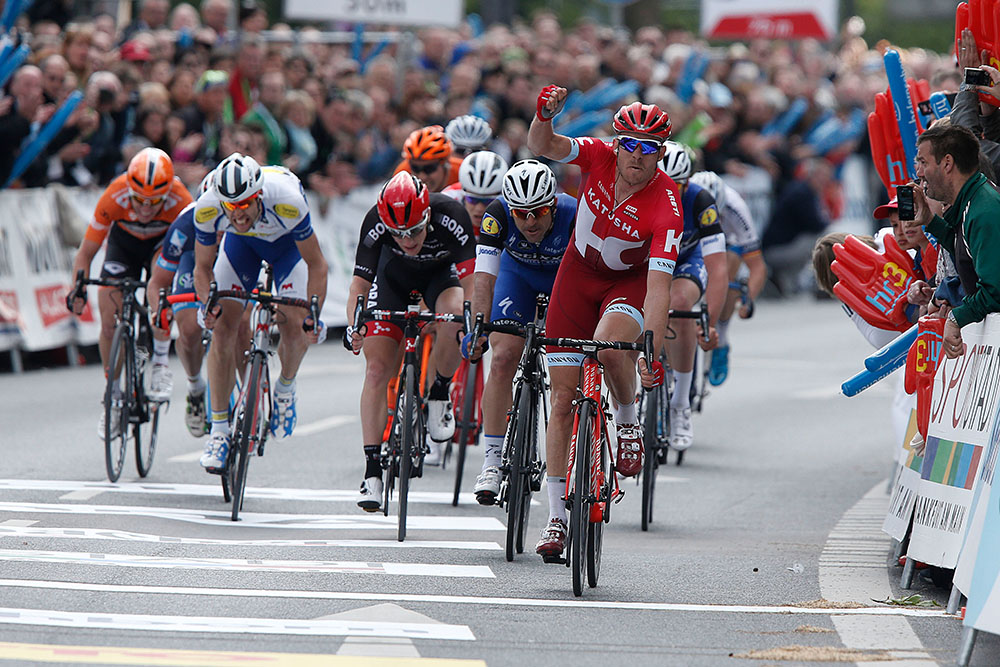 “This was my first race in some time and I was not quite ready for it, just like in 2014 when I also won. I am in the process of building up my training for later results, so it is logical that I had it hard in the first part of the race. I suffered from cramping on some of the local laps and was dropped on the climbs – and two times Slava Kuznetsov brought me back, one time all by himself. He did an amazing job. In the end, I was still there and could be patient. Slava brought me to the front in the last kilometer and then Alexey Tsatevich took over. He did a perfect lead out for me. It was hard with the head wind. I was afraid I had started too early, but I kept my speed until the end”, said Kristoff.

Today’s 206.8 kilometer course began in Eschborn, before sending riders into the Taunus mountains, followed by two finishing circuits which included the short, steep climb of the Mammalhainer Berg, before heading to Frankfurt where the race ended with three laps around a flat 3 kilometer circuit.

A series of breakaway groups both expanded and contracted throughout the day, before seeing the the last of the escapees reined in during the final 14 kilometers.

From there, a series of skirmishes took place during the final laps around the finishing circuit, with riders like Tony Martin (Etixx-QuickStep), Simon Geschke (Giant-Alpecin) and Viahceslav Kuznetsov (Katusha) featuring prominently.

Martin would set the pace for almost an entire lap before Kuznetsov took over, while Katusha was busy ushering Kristoff up to the front as well.

Kristoff would proceed to follow in the slipstream of Kuznetsov and Alexey Tsatevich under the Flamme Rouge, with the Etixx-QuickStep duo of Yves Lampaert and Maximilano Richeze, along with Bennett, falling in behind the Norwegian sprinter.

However, Kristoff was given the perfect lead-out by his team, leaving Richeze and Bennett unable to match his speed, relegating them to second and third place respectively, as the Katusha easily made his way across the finish to seize the victory.