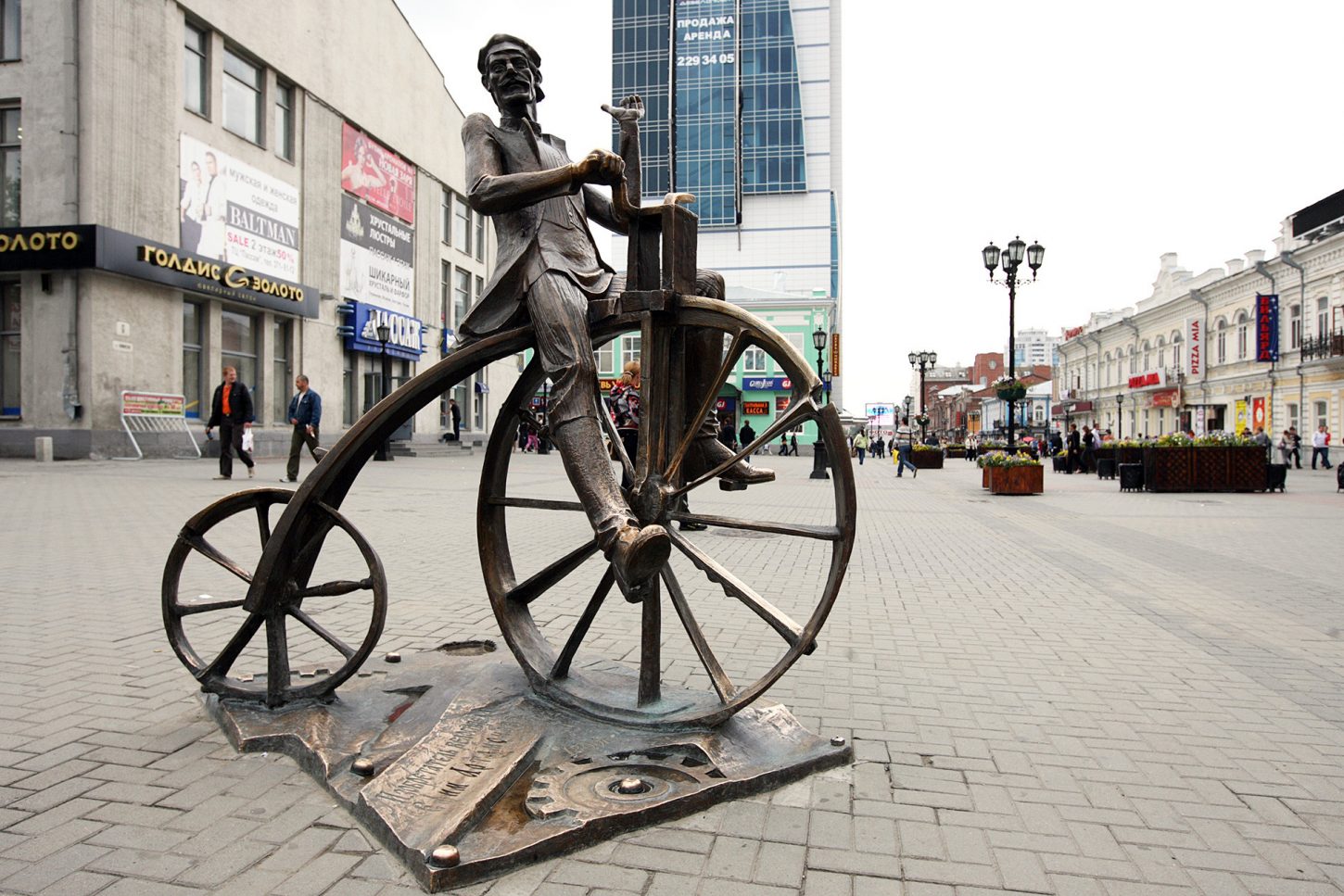 While the invention of the velocipede in the form of Karl Drais’ laufmaschine is accepted as the first two-wheeled human propelled vehicle, the original invention of the pedal-driven bicycle is a matter of debate. Undocumented claims exist for a treadle and rod driven bicycle designed by Kirkpatrick MacMillan in the 1830’s. A fellow Scot, Gavin Dalzell of Lesmahagow, was allegedly selling a pedal driven bicycle of his own design in 1846. While the first documented rear-wheel driven bicycle was built by Thomas McCall, also from Scotland, in 1869. McCall’s invention, however, post-dated the front-wheel driven designs of Pierre Lallement and Ernest Michaux, which date from 1863-1866.

An earlier, though contested, claim for the invention of the pedal-driven bicycle comes from Russia, some sixteen years before Drais’ first documented ride on his laufmaschine. Yefim Mikheyvich Artamonov, the son of a serf carpenter and cooper, Mikhey Artamonov, was born in Pozhevskaya Zavod in 1776, and grew up assisting his father in his work. In 1790, Mikhey Artamonov was sent to Starutinsky on the Chusovaya river to work on the construction of barges. Yefim, who accompanied his father, was frequently required to make the long round trip to Nizhny Tagil and back to collect metal fastenings from the factory owned by the businessman, Demidov.

Perhaps this long journey, made on foot, sowed the seeds of an idea in the mind of the young Artamonov. In 1800 he created a stir on the streets of Yekaterinburg when on the saints day of Elijah the Prophet (20th July in the Julian Calendar) he rode a metal scooter of his own construction through the town, causing consternation among oncoming horses which led to injuries to pedestrians. Artamonov was beaten with rods for his pains.

Chastised, but not deterred, Artamonov then built what is claimed by some to be the world’s first metal bicycle, consisting of two wheels, with the front wheel being two to three times the size of the rear. The wheels were connected by a curved metal frame, and driven by pedals affixed to the front wheel. The whole weighing an estimated 45-60 kilos.

The assassination of Tsar Pavel I at the hands of conspirators, offered an opportunity for local authorities in Nizhny Tagil to congratulate and surprise the new Tsar, Aleksandr I, in novel fashion. On May 9, 1801, Artamonov set out for St. Petersburg on his bicycle, travelling via Perm and Kazan, only to discover on reaching the imperial capital that Aleksandr’s coronation was being held in Moscow at the Cathedral of the Dormition, the traditional location for the crowning of the Tsar since Ivan III’s coronation in 1502

By dint of some presumably serious pedalling, Artamanov, whose journey, if true, made him the first cyclist and the first bicycle tourist, reached Moscow in time for Aleksandr’s coronation on September 15, 1801. The newly crowned Tsar was apparently impressed enough by Artamanov’s invention that he awarded him 25 rubles and manumitted Yefim and his family from serfdom. The bicycle itself was placed in the Imperial collection of rarities, and Artamonov returned home, presumably to enjoy his recently won freedom.

Was the pedal driven bicycle first invented by a Russian serf? Unfortunately, there is no contemporary documentary evidence to support the claim. Nor does there appear to be any contemporary evidence that Artamonov appeared before Tsar Alexandr at his coronation and was freed from serfdom. The first attested mention of Artamonov comes from V. D. Belov, a historian of the Urals and a member of a family of hereditary employees of the Nizhny Tagil factories, in A Historical Sketch of the Ural Mining Plants published in 1896. Several details about Artamonov, such as his forename and patronymic, the date of his birth and death, his other inventions, and the name and occupation of his father, appear to be later Twentieth Century additions to the story.

Metallurgic tests carried out in the 1980’s on a bicycle purported to be that of Artamonov, which was first recorded in the Nizhny Tagil museum in 1923 and is now in the collection of the Cherepanovs’ House Historical and Technical Museum, concluded that the bicycle had been constructed after 1876 and closely resembled British bicycle designs of that period, such as the Starley Ariel.

Artamonov’s invention of the bicycle in 1801 remains unproven due to the lack of any contemporary evidence. Along with other undocumented claims from the first half of the Nineteenth Century it has to be treated with caution. This is not to categorically state that the story of Artamonov’s invention is entirely groundless. In a letter to P. N. Potanin, Belov wrote that while researching another book he had collected local folklore. It is possible that Belov’s brief mention of Artamonov in A Historical Sketch of the Ural Mining Plants was sourced in similar fashion. Without further conclusive evidence coming to light, the claim of an early Russian invention of the bicycle must, however, remain in the realm of conjecture, rather than proven historical fact.