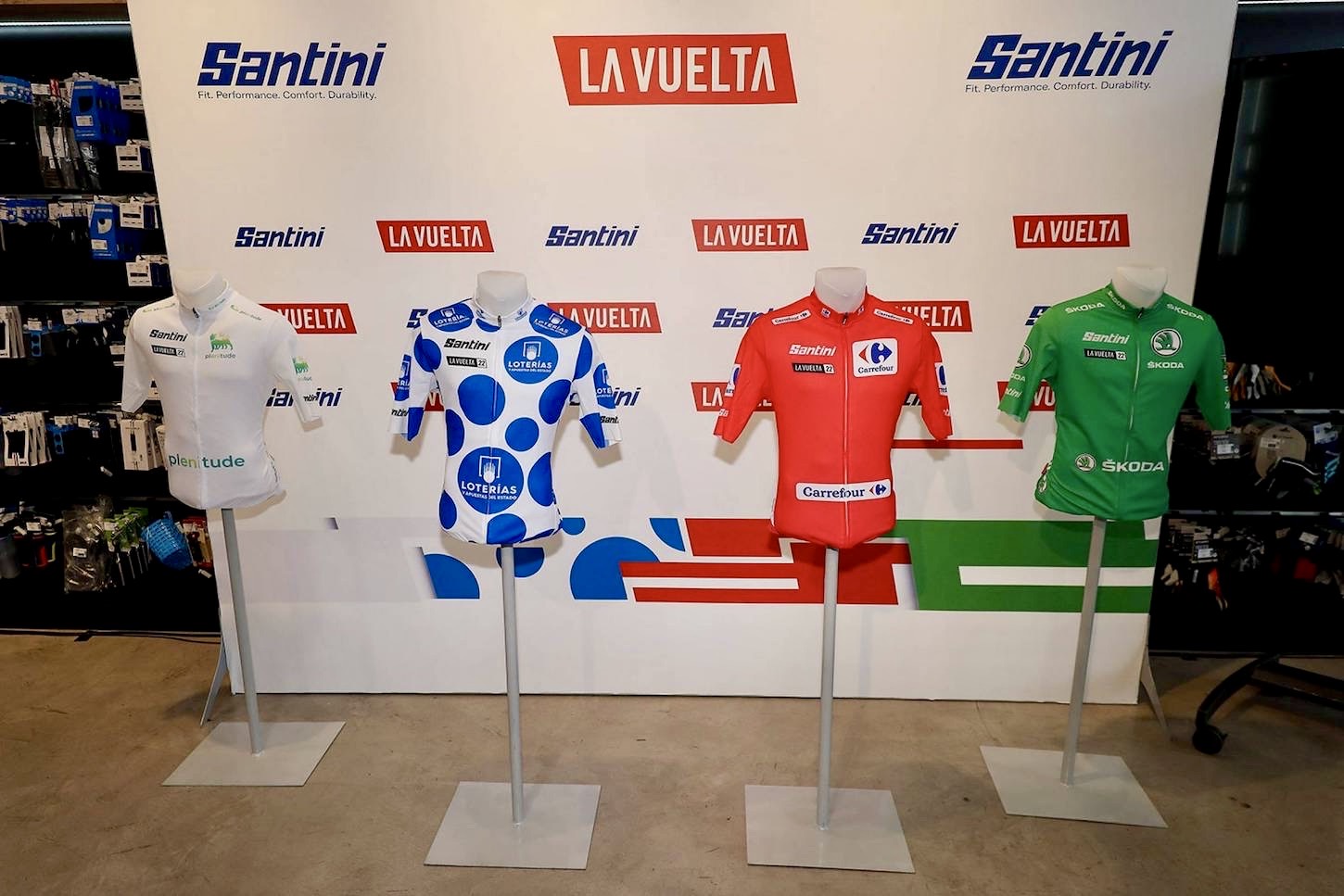 Santini and Unipublic unveiled the official leaders’ jerseys for this year’s Vuelta a España at the La Grupetta store at the Parque Comercial Rio Norte shopping mall Madrid today, along with four special kits to highlight the Spanish Grand Tour.

“We are delighted to be dressing the great La Vuelta champions once again this year. And to be here today at this event to celebrate six years of very fruitful partnership,” said Monica Santini, CEO Santini Cycling Wear.

In addition to the four official leaders’ jerseys, the classifications leaders of the first three stages in Holland will don a special La Roja jersey in homage to the host cities, Breda, Hertogenbosch and Utrecht, designed by fashion creative Mattijs van Bergen, taking his inspiration from the emblems of the three Dutch cities with a bold use of red and white motifs, along with lines and blocks of blue to create a grid of the Dutch flag on the jersey.

Once the peloton returns to Spanish territory, the overall leader will swap back to the traditional La Roja jersey sponsored by Carrefour, while the points leader will wear the Škoda Green Jersey.

Additionally, the Plenitude-branded White Jersey will go to the best young rider and the Polka Dot jersey sponsored by Loterías y Apuestas del Estado will be donned by the King of the Mountains.

As always, all of the leaders’ jersey were produced in Santini’s Italian factory from extremely sustainable materials such as Ecofabric RECY by Corno made using recycled yarn derived from recovered and recycled materials, and Native – Ecoknit by Sitip also made from fibers and yarn recycled without the use of polluting chemicals to reduce consumption of natural resources and dependency on non-renewable energy.

Javier Guillén, General Director of the Vuelta a España Vuelta, was very pleased with this year’s partnership, saying, “following a successful six-year collaboration with Santini, the jerseys truly capture the essence of the race, particularly La Roja leader’s jersey.”

“These, along with the special commemorative editions, make us truly proud to have Santini dressing our champions”, he added.

Alongside the official leaders’ jerseys, Santini will also produce the Asturias kit, which celebrates the eighth stage of the race that has a new finish-line at Colláu Fancuaya, with the yellow and blue colors of the region’s flag setting the tone for the kit. The Victory Cross, which legend has it was carried by Pelagius, the first King of Asturias, into the Battle of Covadonga against the Moors, also features on the jersey and bibshorts.

The 10th stage, a 31.1-kilometer time trial from Elche to Alicante, is celebrated with a kit that was inspired by the Muralla Roja, a post-modern building on the Alicante coast designed by architect Ricardo Bofil in the early 1970s. The Muralla Roja’s façade ranges from pink to red and then sky blue to sea blue, along with unusual geometric forms that follow the lines of the cliff it’s perched on.

Dedicated to the Queen stage, the Sierra Nevada kit is a nod to the white and green of the Andalusian flag and the stunning Sierra Nevada landscape. The kit also features a motif inspired by the Virgen de las Nieves (Virgin of the Snows) statue at the top of the Hoya de la Mora climb.

The kit for the Vuelta’s final stage is dedicated to Madrid’s coat of arms and its famous statue that’s located on the Plaza de la Puerta del Sol, along with a touch of orange as a tribute the Netherlands.

Santini has also created three must-have cycling accessories to coordinate with the kits, a jacket, a windproof vest and a multi-color cap. There’s also a white t-shirt with colored stripes for leisure.

The leaders’ jerseys and the four special edition kits are available from the Santini website (www.santinicycling.com), as well as selected cycling stores worldwide.