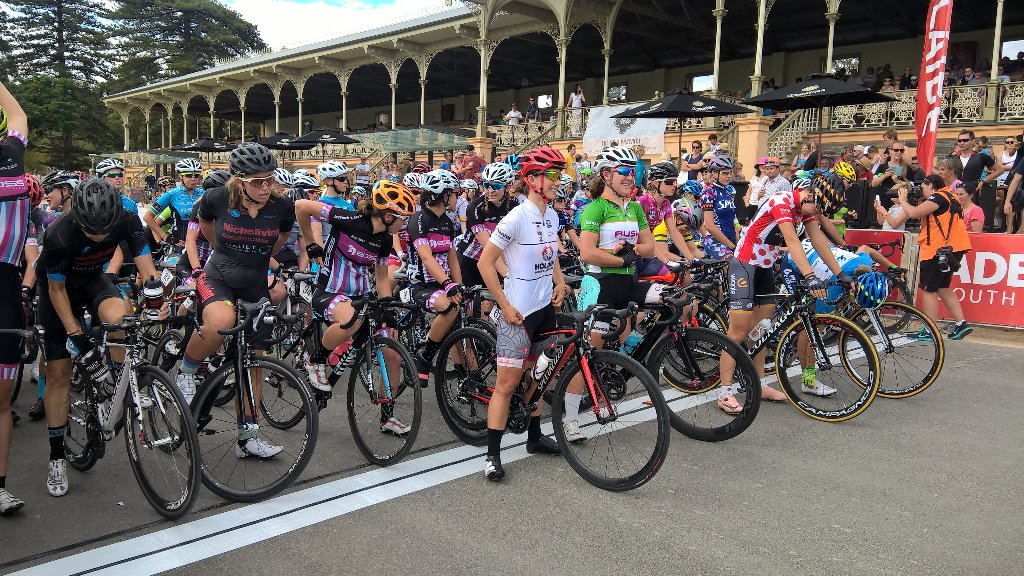 In front of huge crowds on a steamy night at Adelaide’s Victoria Park, High5 Dream Team’s Kimberley Wells (ACT) has stormed home to win the final stage of the opening event of the Subaru National Road Series, the 2016 Santos Women’s Tour, narrowly beating Annette Edmondson (SA) to the line.

Orica-AIS rider and race leader Katrin Garfoot (Qld) showed her strength in the sprint yet again, finishing third on the stage to seal her overall victory in the General Classification.

It was a show of strength from Wells, who pumped her fists in triumph as she crossed the line.

“That was absolutely fantastic,” she said.

“I’ve been really pushing to be in there for a sprint finish the whole tour and finally got one out there with the High5 Dream Team today in front of this fantastic crowd. I’m so excited!”

“That last lap was so fast, it was so hectic. I was trying to follow good wheels for the final sprint. We all saw what happened on Stage 2 with Wiggle High5 and their lead out train, so I didn’t want to get dominated by that again. I used a lot of energy on the back straight to try and get myself in a good position for the really sharp corner, and when I went for it, I never looked back!”

In a tense finale, race leader Katrin Garfoot needed to remain attentive and ensure she was in the thick of the sprint to retain her Leader’s Jersey and win the Tour.

After sprinting her way into third place on the stage, a relieved Garfoot was quick to acknowledge the work of her Orica-AIS teammates, who also won the Winning Team classification.

“We all work so hard together, and without them (teammates) I couldn’t have done anything because I’m not a sprinter, and I needed to follow the good wheels,” she said.

“They got me where I needed to be, and then I tried my best. It’s all up to them that I’m wearing the Leader’s Jersey today.”

“We felt the pressure and we had a plan. It really heated up towards the end. I tried to sit on Chloe’s (McConville) wheel and she got boxed in, then Lizzie (Williams) said ‘me, me, me’ so I got on her wheel, and she just did a perfect lead out!”

In the race for the Sprint Jersey, Lauretta Hanson (Vic) was victorious on 23 points, and the Total Rush rider also won the young rider classification. Danielle King (GB) won the Queen of the Mountain Jersey on 13 points.