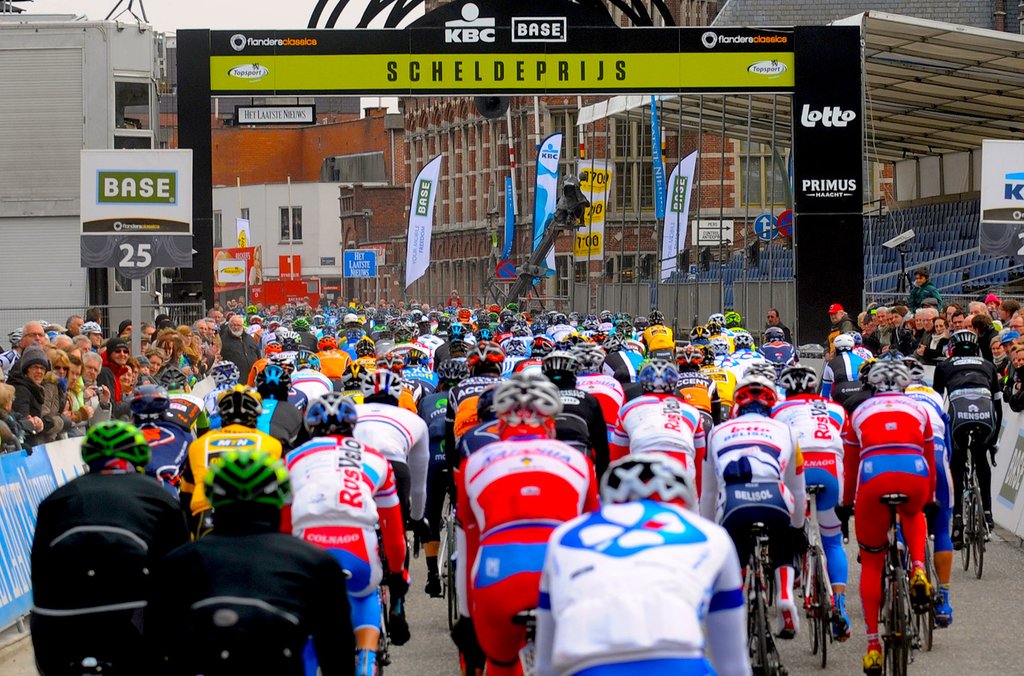 Marcel Kittel beat Mark Cavendish in what turned out to be a photo finish in today’s Scheldeprijs, earning the German rider his fourth victory in the coveted Belgian race – over the last five years.

Kittel was given a perfect lead-out by his Etixx – QuickStep team, while Cavendish (Dimension Data) stayed tight to the German rider’s back wheel, with the duo becoming engaged in a drag race to the finish during the closing 150 meters.

At one point, Cavendish looked to have enough of an impetus to steal the victory, but Kittel ultimately managed to hold him off by less than half a wheel length to seize the honors.

Meanwhile, Andre Greipel (Lotto Soudal) finished a distant third,to round out the podium.

Today’s victory, marked Kittel’s seventh win of the season, while Cavendish thus far has only be able to muster two.

“I think it’s a great victory,” said Kittel who recorded a record fourth win at the classic. “I said before the race that the history is not for what I’m racing. I’m racing for joy, for pleasure, for just riding my bike. Even better if I could get the record for wins in the Scheldeprijs, said Kittel.”

After the day’s early breakaway group was caught during the final 50 kilometers, Wanty – Groupe Gobert’s Frederik Backaert and Roompot – Oranje Peloton’s Brian van Goethe, were the next two riders to attack.

From there, Ag2r La Mondiale’s Sébastien Turgot and Preben van Hecke of Topsport Vlaanderen – Ualoise, took up the chase during last 40 kilometers, but rain hampered their efforts, which ultimately forced them back into the peloton.

With two laps remaining around the local finishing circuit, the two leaders were still clinging to an 18 second lead.

However, once the race reached the final 26 kilometer mark, the catch was made.

With less than 20 kilometers to go, Lotto-Soudal and Etixx–Quick-Step assumed control of the peloton, as they entered the final circuit around Schoten.

Heading into the final two kilometers, despite a challenge from LottoNL – Jumbo, the Belgian team continued to maintain their control.

After a sharp left-hand corner during the final kilometer, Kittel was delivered into position with about 200 kilometers to go.

From there, Dimension Data’s Mark Cavendish pushed his way up along the right side of the road, closing in fast on Kittel.

However, the Manx Missile was not quite able to get the edge on the German powerhouse, who had managed to find a slightly shorter line along the final curvy run-in to the finish.

“I’m disappointed. You could see we wanted it. The team were really incredible today,” Cavendish said. “I knew I had to be on Kittel’s wheel in the final. I knew he’s got a great lead-out.

“I was coming, coming, then when I got next to him, he just went again. I used to be able to do that, to go again. I just can’t now. It’s not like I f—ed up, really. They were just better today.”