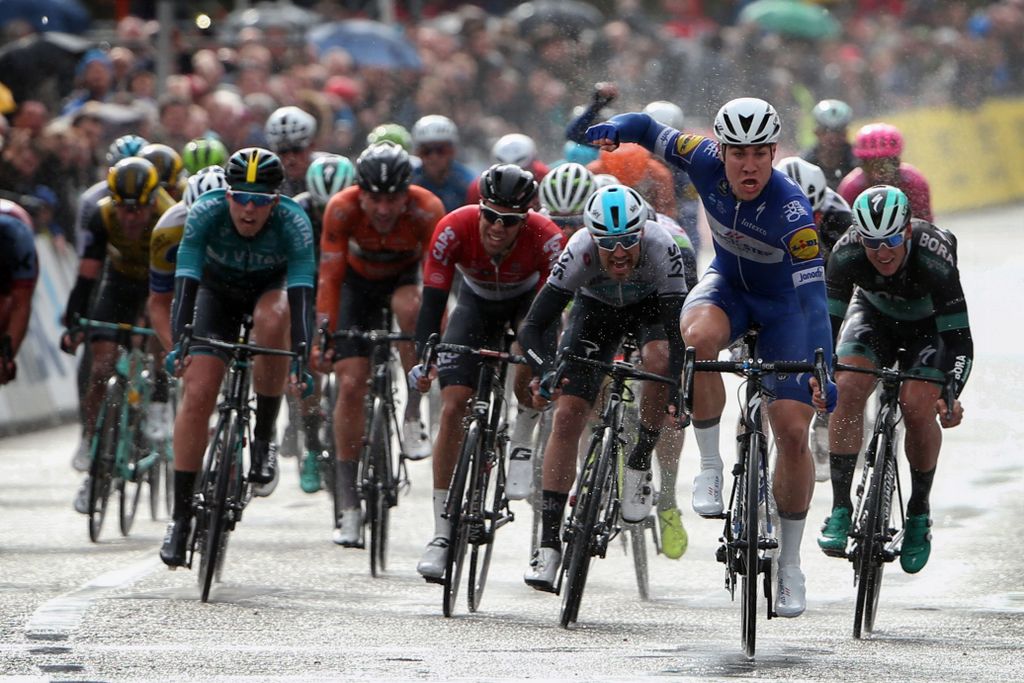 Quick-Step Floors added another victory to its Spring Classics campaign this season, after Fabio Jakobsen claimed today’s Schedeprijs for the Belgian squad in a dramatic sprint finale.

From there, the breakaway group proceeded to lead the race up until the 100 kilometer mark, when strong crosswinds hampered their efforts, leaving them with little more than a 30-second advantage.

Meanwhile, the second half of the peloton ignored a railroad crossing, which resulted in a number of riders being disqualified.

Among the more notable riders to be expelled were Arnaud Demare (Groupama-FDJ), Tony Martin (Katusha-Alpecin) and Dylan Groenewegen (LottoNL-Jumbo).

Not long afterwards, the head of the peloton was successful in reeling in the day’s breakaway group, giving way to Owain Doull (Sky) and Antoine Duchesne (Groupama-FDJ) to go on the attack.

From there, Doull and Duchesne continued to remain out front inside the final 20 kilometers, albeit with just a 35-second advantage.

Back in the chase, much of the work was being done by Kasper Asgreen (Quick-Step Floors) and Mads Würtz Schmidt (Katusha-Alpecin), but Schmidt was quickly pulled off the front as his team leader Marcel Kittel suffered a puncture with 12 kilometers remaining with only Nils Politt dropping back to try and pace the former winner back on.

Back up front, Doull and Duchesne led onto the final section of cobbles with 8.2 kilometers to go, but the duo was soon caught as LottoNL-Jumbo raised the pace alongside Team Sky.

With five kilometers to go, Sunweb moved to the front, but the greatly depleted group was caught off-guard by Jos van Emden (LottoNL-Jumbo) who decided to go on the attack.

From there, Van Emden succeeded in opening up slight gap for himself. But, the Dutch rider was soon caught by a counter-attack initiated by Guillaume Van Keirsbulck (Want-Groupe Gobert) and Matti Breschel (EF Education First-Drapac). However, the trio failed to remain outside the clutches of the peloton and were soon reined in.

With 2 kilometers to go, Quick-Step Floors and Iljo Keisse had things back under control, later handing the lead over to teammate Zdenek Stybar as they approached the flamme rouge.

For a moment Quick-Step appeared to have been caught off-guard, as Marcel Sieberg (Lotto Soudal) commenced an attack with the finish line in sight. But, his move was quickly countered by Team Sky’s Chris Lawless, who decided to gamble with an early sprint.

However, Jakobsen was quick to respond to Lawless’ aggressions, timing his sprint to perfection to surge past his rival and claim the race honors.