CapoVelo.com
CapoVelo.com - - Scicon Shows How 189 Bikes Made Their Way to the Tour Down Under
22315
post-template-default,single,single-post,postid-22315,single-format-standard,no_animation 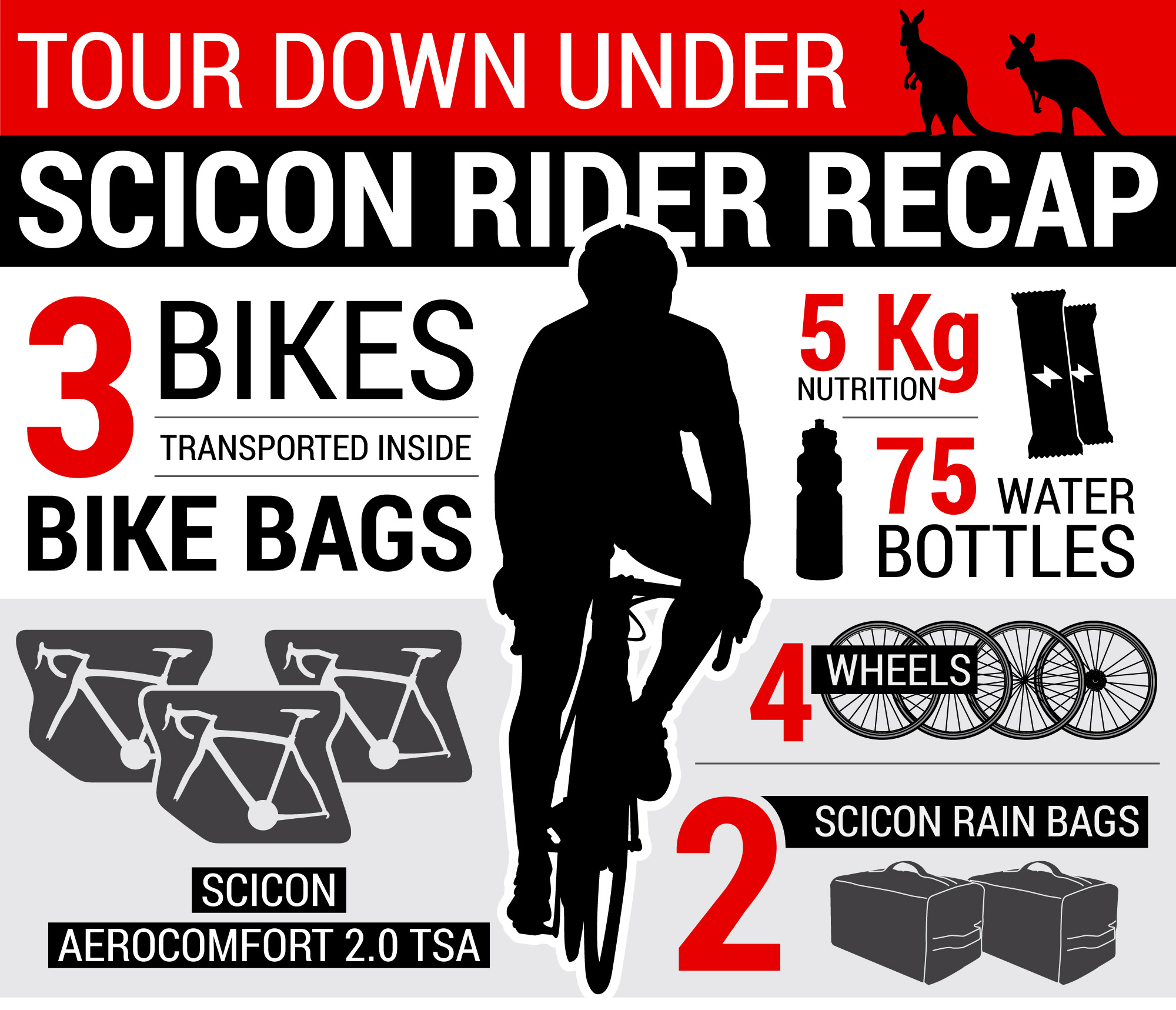 18 Jan 2016
By Campionissimo - In LATEST ARTICLES, THE GREAT RACE

HOW DID 189 BIKES MAKE THEIR WAY DOWN UNDER?

The first major race in the pro cycling calendar is kicking off and it happens to be the furthest afield for most of the peloton- The Santos Tour Down Under takes place in and around Australia’s capital city Adelaide and this year includes the iconic Willunga Hill. The total distance covered during the tour is just over 860km split over 6 stages and the pre first stage ‘People’s Choice Classic’.

But we want to focus on the distance covered before the race. The vast majority of World Tour and Continental teams are based in Europe and the ‘journey to victory’ at the TDU starts a long time before the race itself.

Scicon currently sponsors 6 professional cycling teams and supplies many more with bike bags including Tinkoff, Etixx – Quick-Step, Trek Segafredo, AG2R La Mondiale and Orica- GreenEDGE who are all racing at this year’s Santos Tour Down Under. Scicon, as the leading bike bag manufacturer, play a huge role in facilitating safe transportation of thousands of bikes every year to and from races and training camps around the world. Have a look the the key numbers in the infographic below.

Over the past few years the peloton has seen a huge increase in the number of races outside of Europe like the Tour Down Under. This globalization of professional cycling is great for the sport but it means much more work in the way of logistics as it’s key that the teams get all of the equipment they need safely to the race destinations. This is why so many pro cycling teams are using Scicon bike protection which helps ensure their equipment arrives ready for racing and training.

We currently book an average of 1100 flight tickets per year and that includes 240 bikes in bike bags to races like the Tour of Down Under, California, Colorado, Dubai, Qatar etc. and of course, also to our training camps.
Henriette also explained that they have a dedicated ‘overseas package’ which is always readily available at their service course in Luxembourg. This overseas package includes a list of spare bike parts, water bottles and nutrition as long as your arm. Here’s a simplified version of the equipment set aside for each rider in the form of an infographic

Trek Segafredo, have been racing the TDU since the team was founded in 2011 as Leopard Trek. Scicon’s sponsorship of this team also began back in 2011. They have been travelling with Scicon bike bags and boxes for 5 years now and Matt Shriver, Technical Director of Trek Segafredo says:

Trek Factory Racing will be racing in 17 different countries on four different continents in 2016. Our riders represent 14 different nationalities and very often they fly across the globe on their own with a bike. All this to say that travel is an intrinsic part of our operation and we’re happy to partner up once more with Scicon.
But what sets the AeroComfort 2.0 bike bag above the rest exactly? Why do so many professional cycling teams choose to fly with Scicon bags? We’ll let the pros fill you in themselves-

One of the statistic in the infographic is the cost saved on excess baggage fees by using the AeroComfort 2.0 TSA bike bag. This is of the biggest benefits to the teams. This Scicon bike bag weighs 8.9kg, most teams’ bikes weigh around 6.8kg (as that’s the minimum allowed) so that totals just under 16kg which is within pretty much all airline baggage limits.

Whereas if the teams were using bike boxes, which usually weigh between 12-20kg, they might be pushed over into excess baggage fee territory.

Lets take a bike box which weighs in at 17.5kg (this weight is based on a popular bike box model)

VS 15.7kg total (including bike) with the AeroComfort 2.0 TSA

And lets take a standard airline company that many pro cycling teams are using to fly to and from the Tour Down Under- Virgin Australia, who are pretty reasonable when it comes to bike fees in comparison to some other airline companies.

They allow bikes on for free if under 23kg but will charge $100 (US dollars) each way if over the given allowance (inter-continental). This means that the total excess baggage charges for the four teams travelling to the Tour Down Under with the AeroComfort should be €0 whereas if they were travelling with a heavier bike box it would cost them roughly €4200 extra for a round trip. Bear in mind too that Virgin Australia’s fee are quite low in comparison to some other airlines who charge per kg in excess and have more restrictive dimensional restrictions.

This is a huge amount of saving for a team especially when you consider that most teams have to fly hundreds of bikes out to races around the world each year.

Important to note too is that some continental teams and almost all women’s teams don’t have a team bus or a large service course meaning that the riders tend to look after their own equipment. This means packing and flying out with their bike bag themselves, much like an amateur rider who participates in a lot of sportives and/or often goes on cycling holidays.

From professional mechanics to pro riders to cycling tourists, the AeroComfort 2.0 TSA is the number one choice in bike transportation worldwide with good reason.