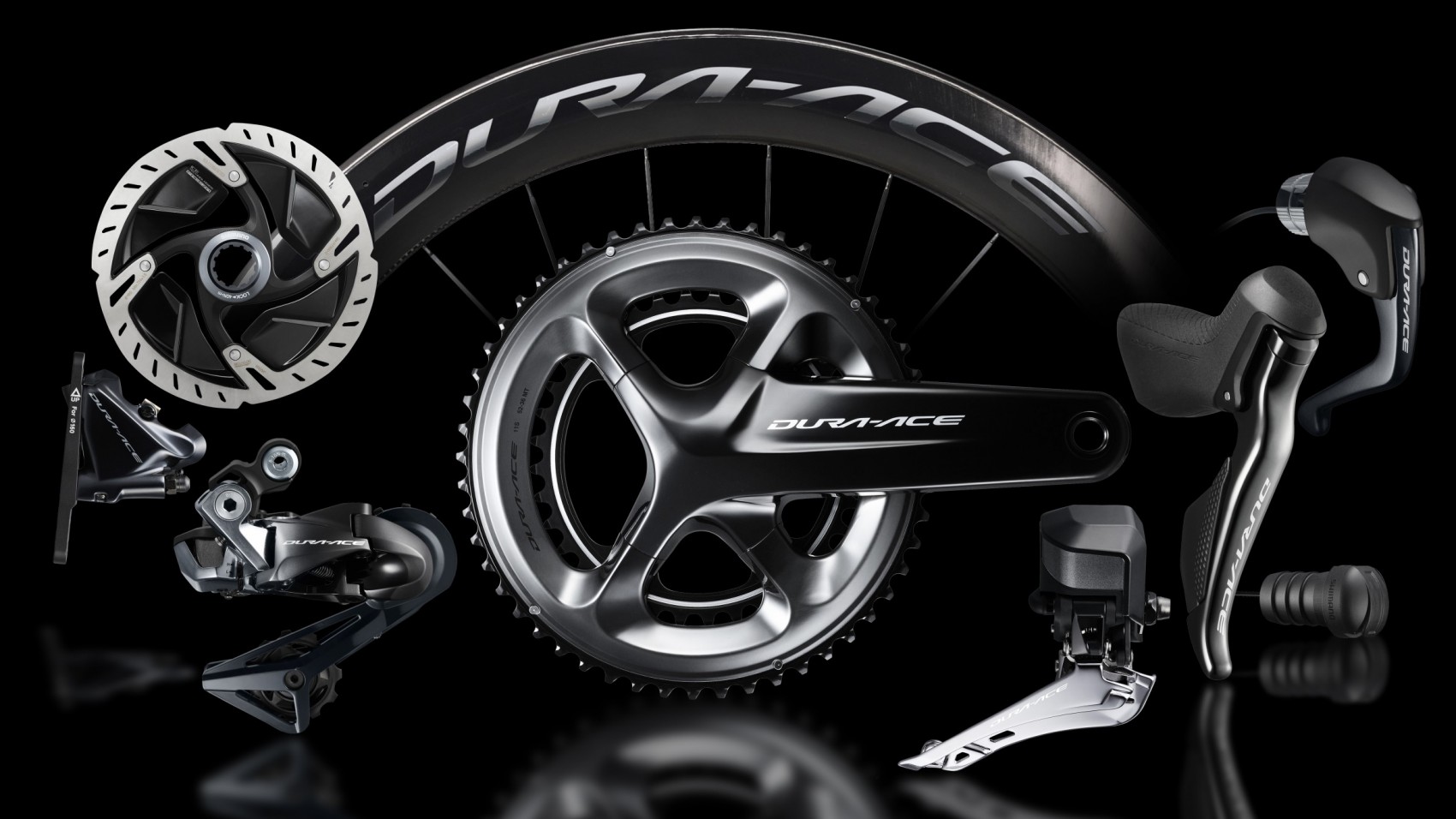 At long last, I finally got my hands on the highly awaited Shimano Dura-Ace 9100 groupset for a preliminary test ride, and it couldn’t have come at a better time of the season than Indian Summer here in New England.

But, rather than delve into extraneous, voluminous details about the new Dura-Ace, I’ve decided to summarize things in Reader’s Digest fashion.  After all it’s just a preliminary review.

For starters, I’m an inveterate Campagnolo disciple, who views riding anything that doesn’t emanate from Vicenza as being nothing short of an infamnia. However, I must admit, over the years I’ve secretly harbored a fondness for Shimano groupsets (and wheels) – especially Dura-Ace.

The most obvious change to the new groupset lies in the revamped crankset, which features a strikingly new gloss black finish, which utilizes Shimano’s Hollowtech II construction along with wider crankarms and a redesigned outer chainring. According to Shimano, these changes have  resulted in both a reduction in weight, as well as an increase in stiffness over the previous Dura-Ace groupset.

Revised hoods and a reduction in “throw” are the clear changes to the new 9100’s levers. In addition, the size of the inner paddles shifters has been tweaked to provide a slightly larger platform. Shimano also appears to have added a new material to the levers as well, which seems to have given them a softer and more tangible feel.

Next to the crankset, the biggest changes to the Dura-Ace 9100 are found in the front and rear derailleur.

The new front derailleur features a much more compact design, which may dove-tail into the current trend of going wider with wheels and tires. But, whatever the case may be, shifting appears to be much more direct and tactile over the previous Dura-Ace.

As far as the rear derailleur is concerned, it looks more MTB than is does road inspired. Indeed, according to Shimano, its radical new shape rips a page right out of their MTB Shadow technology, which is designed to maintain greater tension on the chain and reduce “chain slap”.

Now, whether “chain slap” is a real concern in the realm of road riding, is debatable. However, given its new chiseled shaped and revised mounting angle, the 9100’s rear derailleur was designed to improve the crispness of shifting by yielding better alignment for the best possible “chain line”.

Perhaps the least amount of change, is found in the 9100’s brake set. In fact, it appears the only real changes come by way of greater tire clearance (now up to 28mm), along with a new quick release lever that now sits flush with the top arm of the brake caliper when its in the closed position.

The new Dura-Ace 9100 was fitted to a Wilier Cento.7 frameset, along with a set of glorious Corima S+ carbon tubular wheels – the combination of which would make any groupset perform admirably.

Nevertheless, like all Shimano groupsets past and present, the new Dura-Ace performed flawlessly right out of the box, which is something I can’t say is always the case for its Italian rival.

The shifting was crisp and predictable with excellent lever articulation and precise indexing.

As far as the brakes are concerned, needless to say they extolled the same excellent lever feel and braking modulation that Shimano has come to be known for.

So, how does it stack up to the previous Dura-Ace groupset?

Well, keep in mind this was only a preliminary test ride, and as I first mentioned, I’ve been a dyed-in-the-wool Campagnolo adherent for decades.

Still, having ridden plenty of Dura-Ace equipped bikes over the years, it was easy to discern the positive improvements in both shifting and braking the new 9100 has achieved over previous iterations of Shimano’s flagship groupset.

While more time is needed to really assess the virtues of the Dura-Ace 9100, my initial impression was extremely positive. In fact, at the risk of being ex-communicated by Campagnolo S.p.A., it may very have been the smoothest grouspet that I’ve experienced to date.