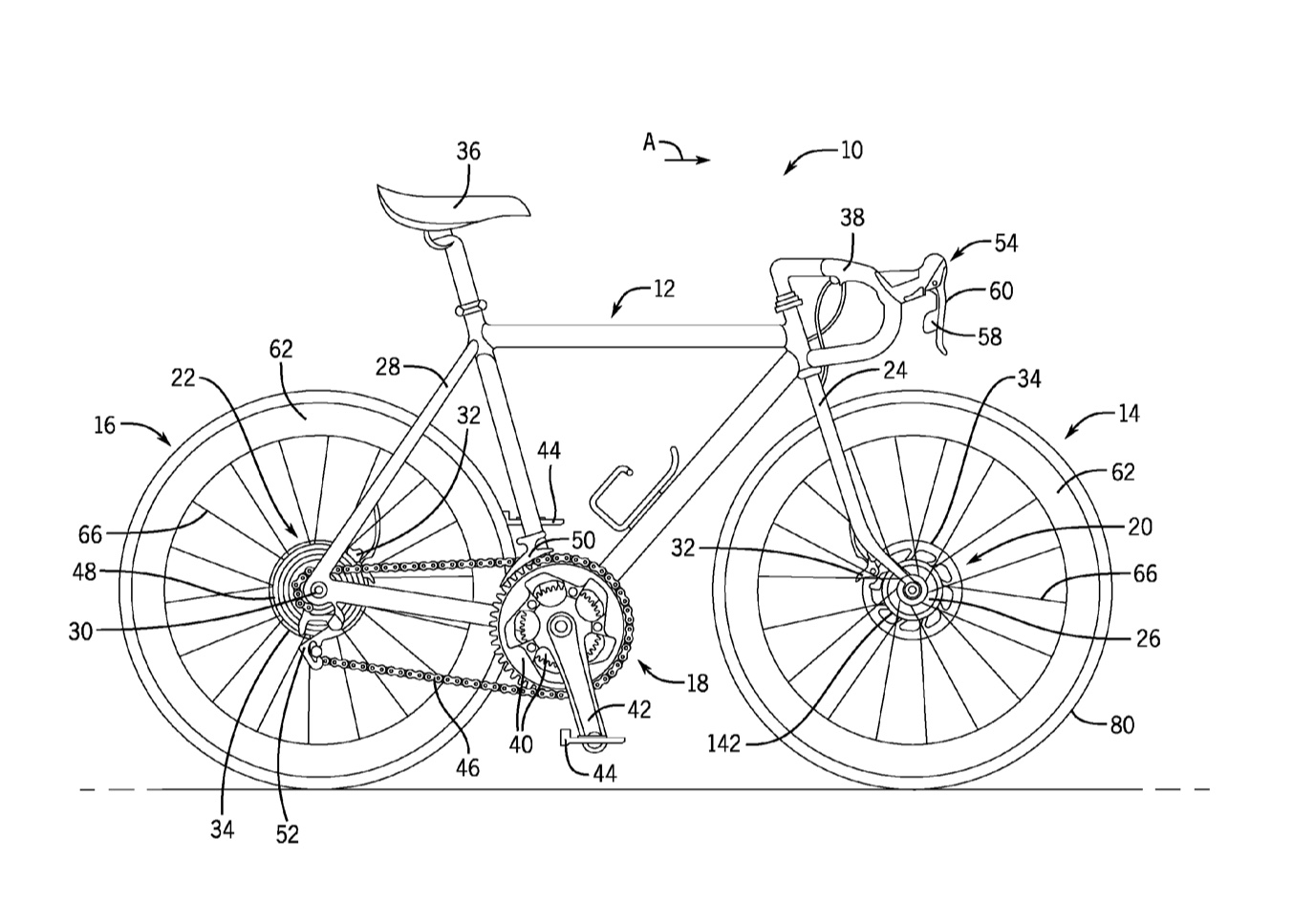 Another patent was discovered this week, this time by SRAM, which shows the component company’s solution to reducing noise and vibration associated with disc brakes.

Indeed, a patent dating back to September 2017, references a design the uses a rubber block to act as a simple damper, thus eliminating noise and vibrations that are often transferred from the rotors to the spokes.

SRAM points to a unique, hollow rubber O-ring they call a ‘frusto-conical’ (they must have been channeling Dr. Seuss), which is designed to sit over the axle of the hub that buffers the inside edge of the rotor and extends past the flanges of the hub to shield the spokes from vibration and contact.

Interestingly, there’s more than just one diagram of the concept that depicts different approaches to dampening. For example, cut-away illustrations show the outboard face of the damper molded directly to the rotor, whereas another version shows the “frusto-conical” molded to the cut-outs of the rotor while also interlocking with the spokes.

In addition, while the patent shows the application on a road bike, SRAM stresses the damper could be applied to all types of bikes, as wells both front and rear disc brakes.

Needless to say, the discovery of this patent suggests there might be a remedy on the horizon for an otherwise notoriously annoying problem, which may even receive accolades from even the biggest stalwarts of caliper brakes.

The premise of a pivoting chainring is to improve the chain alignment of 1X drivetrains, especially when using wide-range cassettes.

In this case however, SRAM has developed a method of eliminating the issue of wobble that comes with a pivoting chainring, by placing the pivot ahead of the bottom bracket in order to improve the offset between gears.

SRAM accomplishes this with what they call “rotation resistance device” the acts  “as a damper in reducing wobble about the chainring.”

Based on the diagrams, the pivot attaches to the bottom bracket shell, keeping it in the same orientation, while the chainring is required to rotate around the fixed pivot. Furthermore, the chainring is positioned on a carrier that rotates on a bearing around the pivot assembly, while torque is transmitted to the chainring via a drive pin that extends from the crank arm, thus allowing the chainring to pivot independently of the pedaling action.

According to SRAM’s diagrams, this movement can be accomplished with a number of different approaches. For instance, one design could allow the chainring to pivot in steps by having it slot into detents, ensuring greater stability in each position.

Tricky stuff indeed. It will be interesting to see if such a system will ever go into production.