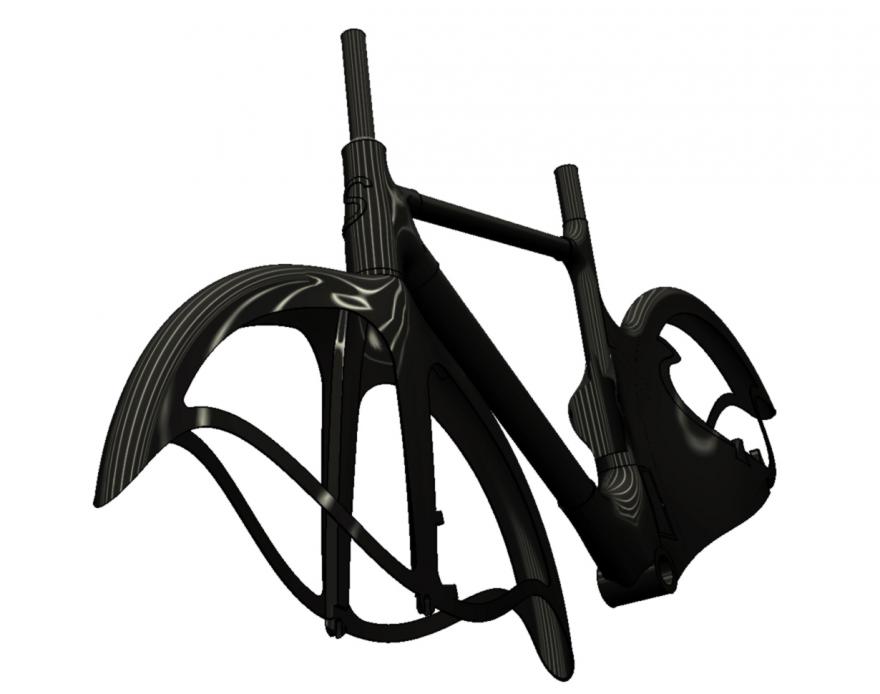 Albeit still in the prototype phase, the British brand, Stebles Bikes, has unveiled glimpses of its new carbon fiber frameset this week – the first-ever to incorporate integrated mudguards.

While engineers continued to dazzle road bike enthusiasts with continuous cutting edge designs with the magical cloth, this is perhaps the first far-flung carbon fiber application of its kind, specifically aimed at pleasing the urban cycling segment.

Stebles Bikes will display a full-size, 3D printed version of its prototype frameset at next week’s London Bike Show, with plans to undertake a vigorous crowdfunding campaign thereafter.

According to Stebles, “I’ve been working on this for years now bit by bit designing it and getting the patent which is granted now in the UK.”

“The unique design of frame and forks covers the wheels to protect the rider from tyre spray, while shielding the most vulnerable part of the chain where it picks up the most debris from tire spray.” Stebles adds. “The cover shapes form a structural frame to support the wheels eliminating the need for a traditional tubular frame.”

It will be interesting to see what type of reception Stebles’ design receives at next week’s show.

As urban cycling culture continues to rise on the European scene and elsewhere, as a result of major cities and urban ares emphasizing to need to set aside automobiles in favor of bikes, we suspect it will win over many.

The future of cycling has landed, with the first ever Patented bike to have mudguards moulded as the frame and forks.

We will have a full scale rapid prototype bike on display at the London Bike show From 11th – 14th February Stand LB1523 (next to the bar) Book your tickets now!

Come a long and visit us and join our crowd funding to raise the fund to start production of this fantastic new bike.

The second revolutionary feature of the bike is to provide a storage compartment that comes complete with a pump, spare tube, patches and levers.

As the most common things cyclists carry with them we incorporated this into the frame so you never have to worry carrying spares in your pockets or saddle bag.

The third revolutionary feature of the bike it to complete complete with an intergrated bottle mount in the frame and each bike will come with our bottle.

This has been streamlined into the frame so you don’t need to worry about fixing aftermarket bottle & cage.