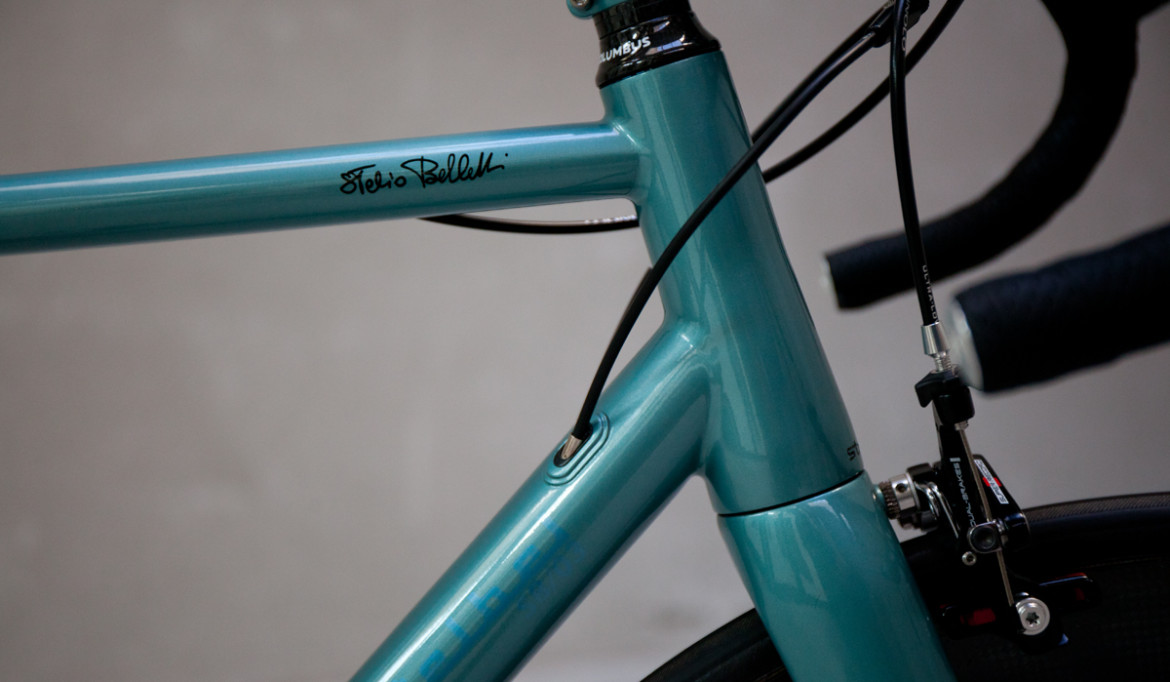 Founded in the early 1970’s by Stelio Belletti, the Stelbel marque has been resurrected to once again join the staple of Italian bespoke frames.

For cyclists who haven’t been assuaged by the magic cloth called carbon fiber, Stelbel offers a range of bikes that will surely bring reverie to those seeking an old world, handmade frameset.

The Stelbel story started by chance. Stelio had just bought a bike, but he didn’t like it. It was no good, he said, not even for basic chores.

There were some steel pipes in his workshop, thick and heavy but fit for purpose. The TIG welder was hardly ever off the shop floor, the surface plate was used regularly, and when it came to metalwork, the skill of Stelio and his father, Antenore, was well-known. So when they decided to make a bicycle, it didn’t even take a day. There, in a workshop in Rodano, just outside of Milan, the first “Telaio Belletti” was born in 1973. From there, it took almost two years for that first Belletti prototype to become a real Stelbel. Stelio was a mechanical engineer by trade, and so could only devote what little free time he had after work hours to realise his dream.

In those days, steel pipes for bicycle frames were only produced with lugged junctions in mind. TIG welding, Stelio’s method of choice, needed something else. Something better. Pipes and techniques were modified. Special chassis were built from scratch. Unique solutions were developed – the famous Stelbel fork crown being just one example. And then, there was the new construction method: TIG (Tungsten Inert Gas) welding. It’s a process that uses a non-consumable tungsten electrode to produce the weld – something that no one in the cycling world had done before. Thanks to his experience in the aeronautical world, however, Stelio was an obvious innovator. Stelbel’s final prototype was called “Integrale”, a name that emphasised the frame’s unique design and the modern, innovative elements that distinguished it from everything else on the market. In the absence of lugs, the frame looked as if it was all one piece. Its integrated characteristics and peculiarities were described in an eight-page document, that was presented to the Italian Patent and Trademark Office on 10 July, 1975.

In the same year, the Stelbel brand made its first international appearance. In the early ’70s, the Polish national cycling team’s mechanic was Italian, and he lived near to the Belletti workshop. He’d been hearing rumours about an exciting frame builder trying new methods, but at that time it was hard to imagine a bike without lugs being strong enough to withstand the rigours of racing. There was something intriguing about the story, however, and so the mechanic commissioned Stelio to build frames for the Polish team. The resulting frames were revolutionary. The tubing used was as thin as possible to minimise weight, with special reinforcements inserted at key points to ensure strength and rigidity. On 27 August, 1975, the Polish quartet took the coveted rainbow jersey in the team time trial at the UCI Road World Championships in Belgium. That success was enough to convince Stelio to devote all of his time to bicycles, and the rest is history.

Over the years, the brand expanded. The workshop in Rodano continued experimenting, trying new things and continuing Stelbel’s tradition of innovation. Aesthetics were refined, the unique fork crown was developed, and some forays into stainless frame construction began using tubing that was custom designed and made specifically for Stelio. Stelbel was also among the very first to introduce vertical rear dropouts, as early as 1977.

Throughout the late ’70s and ’80s, Stelbel built a reputation for using unconventional tube sizes and shapes, oversized or non-circular, and occasionally for surprising the cycling world with special projects like the iconic Punta dell’Est, which was first created in 1983 and then grabbed the cycling world’s attention at the 1985 Milan bike show. By then, a number of large brands had starting using TIG welding in their construction process. Stelbel went from success to success, and when production was at its peak there were people employed at the workshop. There were also some experiments with aluminium and MTB frames. Sadly, personal problems forced Stelio to close the doors on Stelbel in 1990, and nothing more was heard from the famous Telaista – until 2013. In September of that year, there was talk of a return. The foundations were laid, and work began on returning one of Italy’s finest frame-building brands to its former glory. Now, thanks to a collaboration between Cicli Corsa and Stelio Belletti, we’re proud to present the 2015 Stelbel range to a new generation of cyclists.