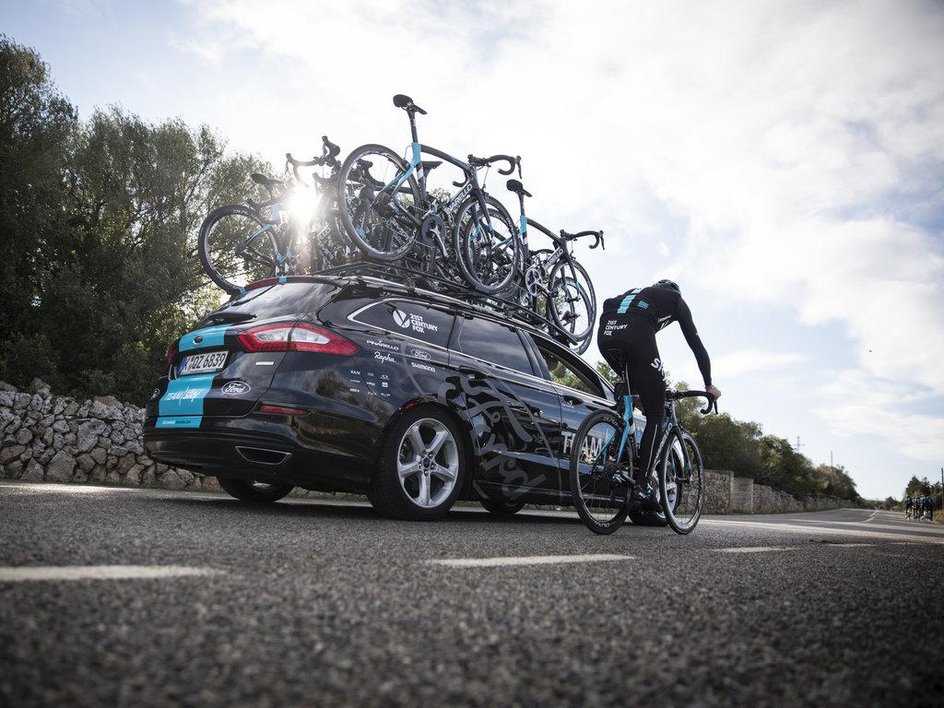 With the imposing test of Paris-Roubaix looming large, Ford has made sure Team Sky’s Mondeos are fully equipped to tackle the Hell of the North.

The 257.5-kilometer Monument dishes out a beating like no other to riders and vehicles alike, and with over 50 of those kilometers taking place on the infamous cobbles, Ford has used everything at their disposal to ensure the British squads cars will thrive when the going gets tough.

Team Sky’s Mondeos have been developed to withstand the rough roads at Ford’s Lommel Proving Ground in Belgium. That state-of-the-art facility features over 80 kilometers of test tracks, more than 100 extreme surfaces, and even a 1.9 kilometer section of road that recreates some of the world’s worst potholes and hazards – just what Sky needs to take on the Queen of the Classics!

And specifically for the demands of Roubaix, an additional 20 millimeters of ground clearance has been added for tackling the deepest potholes, as well as five millimeter alloy plates to protect the engine, brake lines and differential from debris and knocks.

“Paris-Roubaix delivers some of the worst punishment imaginable for a car – exactly the scenario that our engineers in Lommel are testing for every day,” said Stephan Anssems, Senior Engineer, Vehicle Dynamics for Ford of Europe. “While stiffer and well protected, at the heart of Team Sky’s Mondeo is the same tough and durable design that goes into all our vehicles.”

The cobbles are treacherous enough without the added dangers of rain. You have to go back a long way to find the last wet Roubaix, but with potential showers in the forecast, the riders and team cars will be hoping they don’t lose traction.

Team Sky’s Mondeo is also equipped with Ford Intelligent All Wheel Drive technology. The system measures how the car’s wheels are gripping the road surface and can adjust torque delivery between the front and rear wheels in under 20 milliseconds – twenty times quicker than it takes to blink – to tackle slippery or lose surfaces.

“A rider’s worst nightmare is getting a puncture and finding there’s no team car in sight,” said Sport Director Servais Knaven, who won a wet and wild Paris-Roubaix back in 2001. “We rely on our cars to battle through the toughest conditions and be on the spot to deliver the new wheel, rolling medical attention or drinks bottle that could be the difference between first and second place.”