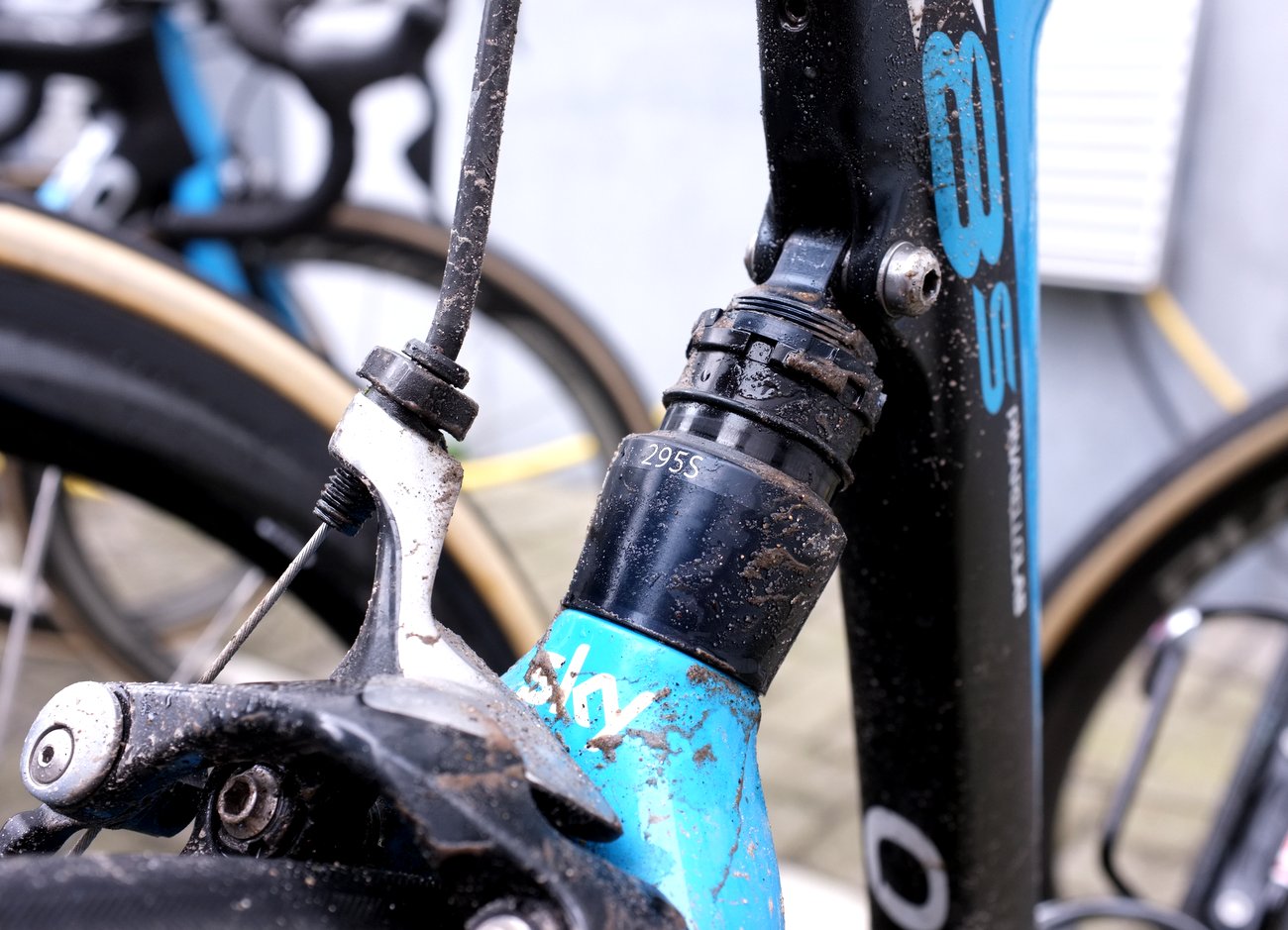 03 Apr 2015
By Gianni Pericolo - In FEATURED ARTICLES, THE GREAT RACE

The DOGMA K8-S has been designed especially for the challenging terrain of the cobbled classics, and features a new lightweight suspension system (DSS 1.0, Dogma Suspension System) and flexible flat carbon chain stays (FLEXSTAYS™) to create a pioneering suspension pivot in the rear triangle to ensure perfect riding comfort over rough terrain.

The innovative frame improves rider isolation from the challenging road surfaces, and helps reduce fatigue. Taking insights from the DOGMA F8 – the first collaborative project for Jaguar, Pinarello and Team Sky – Jaguar’s engineers have applied their advanced aerodynamics knowledge and experience in ride and vibration analysis to help create an overall performance increase of 4.6%, and 50% improved comfort for the riders over rough terrains from the previous DOGMA K model.

“The Pinarello DOGMA K8-S looks as good as the DOGMA F8, and from the moment you get on it, you realise the difference straight away, especially on the cobbles,” said Team Sky’s Sir Bradley Wiggins.

The reigning World Time Trial Champion added: “I’ve never ridden anything like it on cobbles before, which is the most extreme terrain you can ride a bike on. The way it feels, its aerodynamics, stiffness, and improved flex in the rear, is game-changing for cycling.

“This is the first time anyone has gone out there, looked at the demands of the cobbles, and made a bike specifically for that job. It was really noticeable in testing between the guys on the K8-S to the others that weren’t. It gives us lots of confidence and a huge advantage on the cobbles.

“The level of innovation and thinking outside the box, largely down to Team Sky and the automotive expertise from Jaguar, is streets ahead of other teams and manufacturers out there.”

Fausto Pinarello, CEO of Pinarello, said: “The DOGMA K8-S can reshape the world of road racing. The DOGMA K8-S absorbs only the necessary shocks of the road to allow you to keep pedalling regularly with optimum power and precision. It is the perfect bike for the cobbles.”

Sir Dave Brailsford, Team Sky Team Principal, said: “We’ve been able to knit together Pinarello’s world class knowledge in bike design and Jaguar’s industry-leading technological and engineering expertise, with a proven winning team of riders and experts in human performance, to come up with something truly ground-breaking.

“The DOGMA F8 was the first real breakthrough of this partnership, and we’ve now taken it a step further. The DOGMA K8-S is a significant jump in terms of a bike’s impact of performance. It’s rare for one small design innovation to make such a large difference. This is one of those situations.

“The Classics have been a big goal for us this season and with Ian Stannard’s win at Omloop Het Nieuwsblad and Geraint’s win at E3 we’ve had a great start. Anything can happen in these races, which makes them so exciting, but this bike will give us the best possible chance of continuing our success.”

The DOGMA K8-S has been subjected to several months of laboratory and practical tests, using accelerometers, powermeters and GPS instrumentation, to ensure rider safety and performance efficiency of the new frame.

In March, Sir Bradley Wiggins and Christian Knees, tackled the long and regular cobble sectors on the last 130km of the Paris-Roubaix route, where comparative tests were undertaken with the previous DOGMA K frame.

“The experience Jaguar has developing vehicles over widely varying surfaces across the world has helped us to understand what may be required for cobbled surfaces,” said Tim Donovan, Vehicle Dynamics at Jaguar Land Rover.

Donovan added: “I am a keen amateur cyclist and have ridden my own classic Pinarello over many of the famous cobbled surfaces raced in the Spring Classics, so I know first-hand how challenging they are. I remember watching Ian Stannard win Omloop Het Nieuswblad in the rain in 2014 and again in 2015, so to work with him and the other Sky riders at these mythical locations was a wonderful experience.”

Mark Cameron, Global Brand Experience Director at Jaguar Land Rover, said: “Jaguar Land Rover vehicles are renowned for their balance of performance, refinement and comfort. This philosophy has been extended into our partnership with Pinarello and Team Sky for the development of the DOGMA K8-S. With shared ambitions to consistently push the boundaries of high performance, innovation and technology, we’re extremely excited about the DOGMA K8-S.”