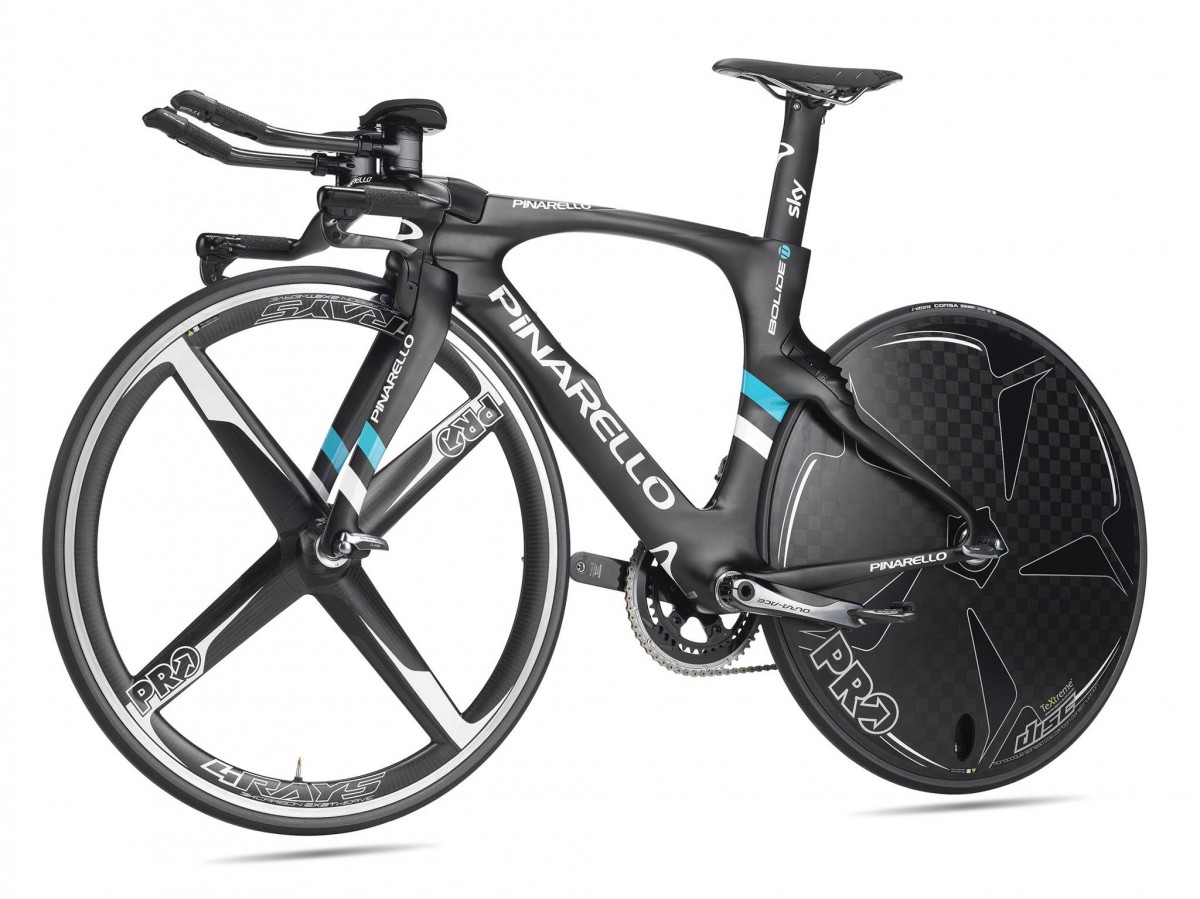 According to Pinarello, the new Bolide TT has received an amazing weight reduction of 350g, as well as lower aerodynamic drag compared to the prior iteration, thanks to fine-tuning of the carbon frameset design.

The new concave down tube reduces the space between the water bottle and frame, thereby smoothing airflow and reducing drag. The rear brake gets a new aerodynamic cover, the top tube has been redesigned and even the front dropouts were tweaked for aerodynamics.

The striking Bolide TT is significantly lighter than the outgoing Bolide, with 350 grams shaved from the frame’s weight, and aerodynamic drag has been drastically reduced by a whole host of cutting-edge revisions.

Featuring a new concave down tube that reduces turbulence in an essential area of the frame, a sloping top tube that helps to optimise the bike’s aerodynamic profile and a new rear brake cover derived from the aeronautical industry, Pinarello has crafted an exciting new machine.

Landa, who will be the only Team Sky rider on the Bolide TT in Italy, said: “Again, Pinarello has produced a fantastic bike. I’m so happy to use the new Bolide in the Chianti time trial. Knowing how much work has gone into preparing this bike for me just gives me even more motivation to achieve the best result.”

Team Sky Team Principal Sir Dave Brailsford said: “What I like about Pinarello is that they combine cutting-edge engineering and creativity. They are always looking to find new ways to improve. The Giro d’Italia is about seeing the best bikes and the best riders, so I’m really looking forward to seeing Mikel on the new Bolide.”

Pinarello President Fausto Pinarello expressed pride at his company’s latest creation: “For us it’s a great joy to have the opportunity to give birth to a “new creature” for Team Sky riders! The Bolide TT is the evidence of the enormous commitment that our technical staff has put into design and production of what will be the most powerful time trial frame in the world! I’m very proud, and I’m happy that already at the Giro d’Italia some of our athletes will have the chance to use the Bolide.”

Our relationship with Pinarello has gone from strength to strength since we joined forces at the team’s inception in 2010 and the Bolide has helped our riders time trial to numerous victories, including back-to-back Time Trial World Championships with Sir Bradley Wiggins claiming the rainbow jersey in 2014 and Vasil Kiryienka in 2015.

Carsten Jeppesen, our Head of Technical Operations and Commercial, added: “This is our seventh year working in partnership with Pinarello, and we’re very proud of that. We’ve had fantastic success in that time, but the reason the relationship between Team Sky and Pinarello works is that we don’t rest on that success. We’re always looking ahead to see where we can gain an advantage, and the new Bolide is just the latest example of that.”