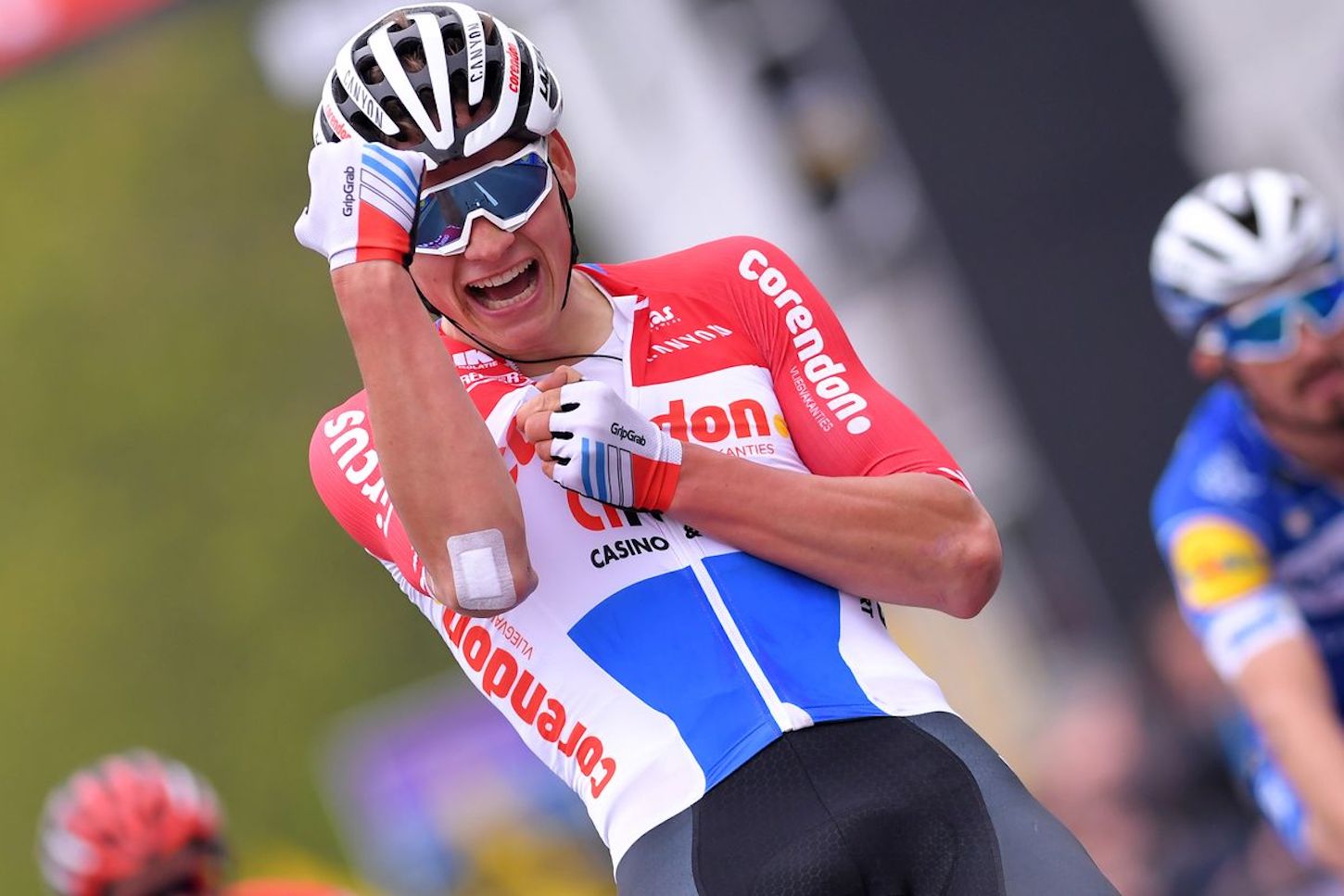 Mathieu van der Poel, the current Cyclocross world champion, 2018 Mountain bike cross-country bronze medalist, runner up at the 2018 European race road championships, and 2019 Amstel Gold winner, is the odds-on favorite to win the upcoming 2019 Road World Championships in Yorkshire, England. Considering “VDP’s” huge natural talent and strength, his skills across multiple disciplines and the flashes of brilliance which he already demonstrated during his limited appearances on the road, this makes complete sense.

Despite agreement among bettors, pundits, and rivals that he is the man to beat in Yorkshire, it is becoming increasingly odd and curious that the Dutch star has never competed in the sport’s marquee event, the Tour de France, or any of the other grand tours, and only one of the traditional “monument” events (the 2019 Tour de Flanders). And not only that, he doesn’t seem to currently even have any specific plans to make an appearance in the near future, outside of his grandfather (the great French rider Raymond Poulidor) stating “I think he wants to do the Tour, who knows.”

While he is arguably the road cycling’s hottest prospect, van der Poel plans to focus on the XC Mountain Bike race at the 2020 Tokyo Olympics. This implies that he is postponing his Tour debut until at least the summer of 2021, when he will be 26 and a half years old – late for a superstar to be making their inaugural grand tour appearance.

For reference, Peter Sagan made his at the Vuelta a Espana, at the age of 21 (winning three stages), and rode his first Tour de France at 22. Egan Bernal just won the Tour de France at age 22, and Slovenian wunderkind Tadej Pogacar is currently mixing it up with the World’s top riders, already taking two Vuelta stage victories at age 20.

Furthermore, unless there is some kind of transfer in the meantime, even a 2021 Tour appearance is dependent upon the assumption that his second-division Pro Conti squad, Corendon-Circus, with whom he has a contract through 2022, gets one of the highly coveted wild-card selections, or is able to generate the funding and points to make the jump to the WorldTour.

This delay to his debut at the sport’s biggest race sets up a strange if tantalizing scenario, wherein road cycling fans get a brief glimpse of van der Poel’s absolutely mind-bending performances, and then have to watch as he walks away from the sport for months on end. The astonishing manner in which van der Poel pulled back world-class riders Julian Alaphilippe and Jakob Fuglsang in the final kilometers of this year’s Amstel Gold race, only to toast the rest of the field – which had been chasing in his slipstream – was probably one of the most impressive performances in cycling history. And many observers think that was just a teaser of what’s in store.

When van der Poel then took a four-month break to race mountain bikes for the summer, attentive viewers could logically have been left asking themselves, “Wait, what happened to that really good guy?” as they watch other riders, now considered potentially inferior, battle it out for the biggest prizes in the sport.

Clearly van der Poel should be applauded for his willingness to set traditions aside, go his own way, and race a schedule that makes him happy. Hopefully, he will be able to avoid the burnout that has often hit multi-discipline riders. In recent years, phenom women’s racer Marianne Vos has been able to maintain her form and focus while racing several different disciplines – but she is also widely viewed as a one-of-a-kind in racing history, and she has been forced to temper her schedule after taking 2015 off due to fatigue and injuries.

Either way, van der Poel’s simultaneous pursuit of three different disciplines sets up something of an awkward dynamic for road cycling. When viewers tune in to watch the Tour de France, there is the implicit assumption or understanding that they are watching the premier riders in the world duke it out for victory on the sport’s biggest stage. If possibly the most talented rider in the world chooses to sit the race out, it will eventually be a bit embarrassing for the race – and for the sport’s ability to market its premier event.

This isn’t van der Poel’s fault, and it’s not even remotely his problem – he is simply racing the events he enjoys the most, and where he feels most engaged as a competitor. He’s been fortunate to have a Pro Conti team (Corendon-Circus) which realizes they have a once-in-a-generation star, and has been willing to let him have the flexibility to engage in all of his different pursuits. Likewise, Canyon Bicycles has been fortunate (through a presumably relatively inexpensive Pro Conti sponsorship) to have the budding superstar sitting on their bikes in all three disciplines. However, this whole situation may soon get a bit more complicated – due to some recent events beyond the control of either van der Poel or Canyon.

Swedish private equity investor Triton Partners, the owner of Sunweb (a travel company, and current sponsor of the men’s and women’s WorldTour team) recently acquired Corendon, also a travel operator, and the name sponsor of van der Poel’s Corendon-Circus (C-C) Pro Conti team. Triton plans to merge the two companies together, and will then find itself by default in the position of essentially sponsoring two major cycling teams. The Corendon CEO, Steven van der Heijden, has already gone on the record, saying that the costs of running two professional cycling teams “is of course a bit much” for one parent company.

There is also UCI rule 2.2.001, which states, “Riders belonging to a team registered with the UCI with the same paying agent or main partner may not compete in the same race.” Presumably this would be interpreted to mean the owner of the team license, rather than the primary sponsor of the team. (This was precisely the pickle Patrick Lefevere found himself in with QuickStep-Davitamon and his short-lived Bodysol-Brustor side-project in 2004.) Triton’s portfolio companies would probably be able to manage around this constraint, but if the firm lacks the

appetite to indirectly sponsor two teams, it most likely means that Corendon and Sunweb would look to either facilitate some kind of combination of the two squads, or cut sponsorship to one of them. If and when that happens, it could open up a can of worms for several different parties. Let’s look at the possibilities of what could happen.

First of all, Canyon, the current direct-to-consumer bike sponsor for C-C, would be pushed into a tough spot. Canyon has been getting significant positive exposure with van der Poel across three cycling disciplines, and they would certainly be keen to continue their relationship with him. One of their two WorldTour teams, Katusha-Alpecin, appears likely to fold at the end of the season. (The other WT team riding Canyon bikes is Movistar.) The visibility and value for Canyon that van der Poel delivers through C-C is probably already worth as much or more than what they are enjoying from their Katusha deal. In fact, prior to the recent corporate transaction, there had been rumors suggesting that Canyon might prefer to shift their resources from Katusha over to Corendon, and help move the team up to the WorldTour level. But now, that picture is less clear.

If the Triton companies did decide to consolidate and focus their cycling-related activities and sponsorship funds on just one team, it would likely be Sunweb – currently a major and successful top-level WorldTour team. But it would be difficult for them to force a “merger” of sorts with C-C, since they don’t actually own the team. If they pulled their funding for the Pro Conti team on the other hand, even though C-C has van der Poel under contract for three more years, C-C might be forced to at least consider some sort of combination. That eventuality would probably see the smaller Corendon team fold, with Sunweb handpicking a few of the top riders – a situation that would be less-than-ideal for both van der Poel and Canyon, as it would likely require van der Poel to focus more on the road. And Canyon would either lose their deal with van der Poel or have to step in and somehow take over sponsorship the new Sunweb team from Cervelo.

There have been all sorts of rumors: besides C-C combining forces with Sunweb, there have also been suggestions of a deal with Katusha; key sponsor Canyon has mentioned a van der Poel transfer to their other WT team, Movistar; or C-C could try to make the move to the WorldTour on its own. At least at first glance, Van der Poel’s intuitive style of riding doesn’t seem like a very good fit for Sunweb’s controlled and scientific approach; merging into the declining Katusha program seems less attractive than the Sunweb alternative; and the Movistar transfer seems like a particularly poor idea, given the team’s lack of focus on the key Classics events where van der Poel has excelled. And, if the C-C team was to try to jump to the WorldTour on their own, they would need both a major new sponsor and considerably more UCI Points. That in turn would likely translate into a more extensive road schedule for van der Poel in 2020, something he has already declined. So, at least at the moment, that also seems like a stretch.

The other consideration for any future sponsor is that if and when van der Poel switches to more of a full-time road schedule, it will likely have significant financial implications. According to an anonymous rider agent, if he switched full-time to the road, van der Poel could probably command a salary of about $5 million a year – at least five times what he is rumored to currently be making. Retaining van der Poel’s services on a full-time road contract would seriously balloon sponsorship costs to whatever team and bike manufacturer was lucky enough to land him.

The Roodhooft brothers, owners of the C-C team would undoubtedly love to somehow team up with Canyon and find a major new sponsor, hang on to van der Poel over the long-term, and figure out a way to move the team up to the WorldTour. But as many cycling managers have learned, even highly successful teams have sometimes had trouble finding major sponsors. So, C-C may eventually have to consider some of the alternatives mentioned above

The future alternatives here are dizzying – and they combine to leave the immediate future of the most exciting young prospect in road cycling, at least three different teams, and a couple of major bike brands all up in the air as we head toward the off-season. Van der Poel is under no pressure to make a decision, and he will likely experience great success at whatever discipline or events he chooses. However, he may eventually have to coordinate his future plans with the financial realities of some team. Suppose the C-C team can’t find a new sponsor, or suppose they can’t acquire the riders to earn them enough points to move up to the WorldTour. And what if van der Poel’s style or preferences aren’t a good fit with Sunweb? It’s conceivable that one of the most talented riders in the sport could find himself with surprisingly few good options.

Whatever the eventual outcome, van der Poel’s eventual choices will have significant and wide-ranging implications for multiple stakeholders and teams. And even ASO, organizer of the Tour de France, may have no say in the matter – as van der Poel defers racing in its flagship event to pursue other objectives. As road cycling continues to struggle with engaging new fans and attracting more viewers and engage, the major stakeholders in the sport will all be holding their breath – hoping the future’s brightest star will finally show up to the party.