The Importance of Seasonal Lights for Cycling 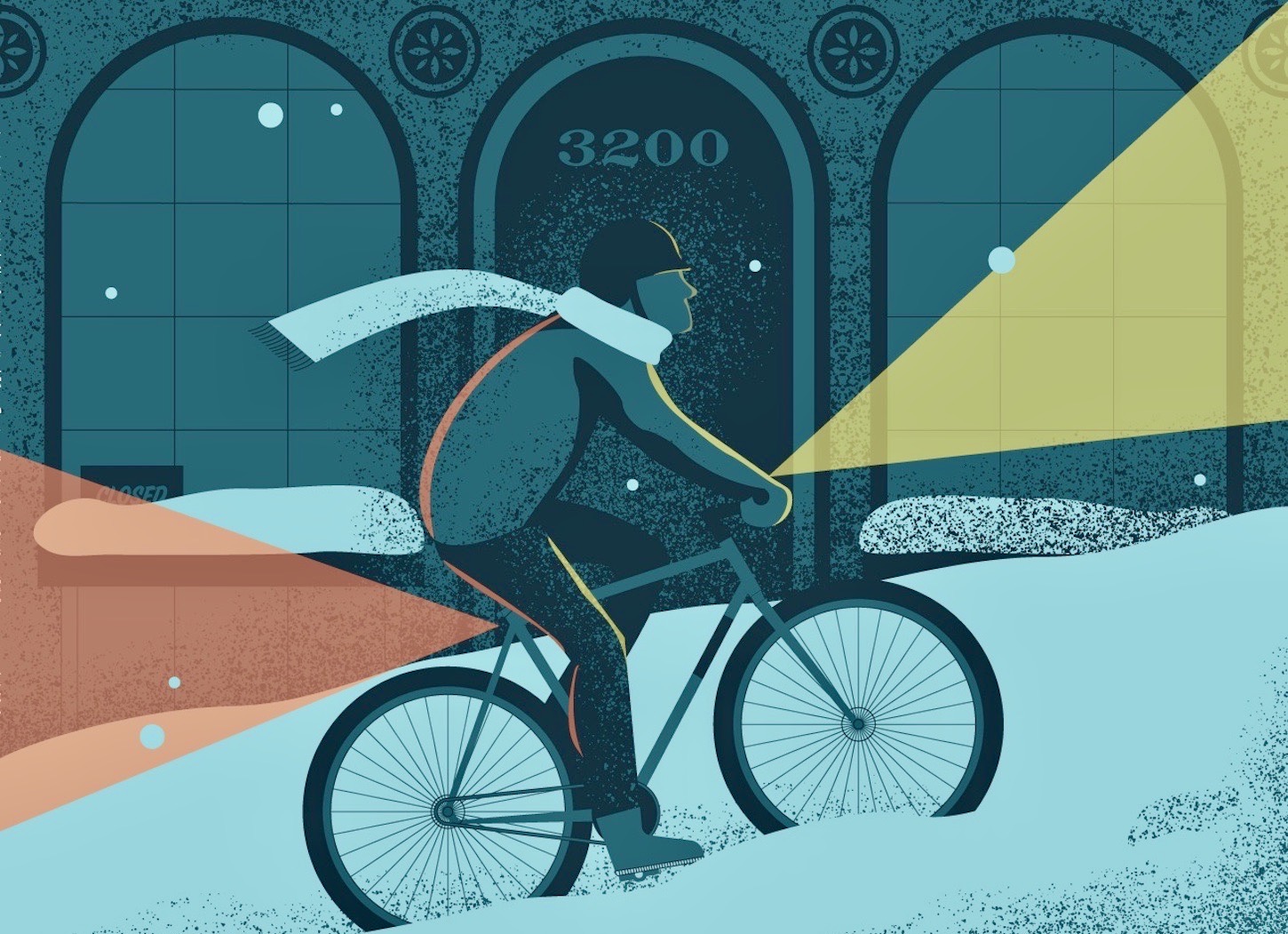 Once again, we are coming to the season for celebrations with family and friends, festive holidays, and seasonal decorations and lights. It’s also traditionally the season when I remind cyclists that with the end of daylight saving time, shorter days, and seasonal weather that reduces visibility on the road, it’s more important than ever to make sure that we are well-lit while riding.

Many cyclists ride with lights year-round, but now lights are a necessity for every cyclist. Even if you’re only planning on riding in the daytime, you may unexpectedly get caught out on the road after sunset. Or the weather may suddenly change, and what began as a clear day with good visibility may quickly become a day with dramatically reduced visibility.

First, there are laws in every state that require cyclists to use lights under certain conditions. While the exact legal requirements will vary by state, they are generally quite similar. That’s because the Uniform Vehicle Code, a set of “suggested” laws for the states to consider, serves as the basis for the vehicle codes the states enact. Of course, states do sometimes add their own “flavor” to the laws, so it’s important to understand exactly what the state law is where you ride.

How important is this freedom to go beyond the minimum requirement? Think of it this way: a lighted match at 500 feet is bright enough to meet what the law requires. But is it bright enough to help drivers see you? Not by a long shot. And when we’re talking about lights, that’s the goal: to help drivers see you better. There’s a lot of science around conspicuity (that’s the science-y word for how visible you are to other people), and the bottom line is, the sooner drivers can see you, the sooner they can react to your presence on the road.

For these reasons, the best choice will be lights that are brighter than the minimum required by law. And to make sure your lights stay bright, be sure to always have fresh (or freshly-charged) batteries on hand or a USB charger handy so you’re not surprised by dying lights on your nighttime ride home.

The law also requires you to have what we call passive lighting, aka “reflectors.” Technically, reflectors aren’t actually lights, because they, well, reflect light that strikes their surface. But by reflecting light, they are acting as a passive source of lighting. You don’t have to do anything to activate them. You don’t have to have them connected to a power source. They just sit on your bike, doing nothing until the moment light strikes the reflector’s surface. That’s the moment they start working, alerting drivers who are approaching you of your presence on the road.

Reflectors are not a substitute for active lighting, either from a safety standpoint or a legal standpoint, but if your active lights stop working on your ride home, your reflectors are a fail safe backup lighting device that may make the difference between a safe ride home, or an ambulance ride to the emergency room.

There’s one other legal point you need to know about lights. The exact legal language will vary by state, but the state laws all require the same thing: in conditions of low visibility, you need to ride with lights.

“Low visibility” always means at night but also includes conditions like fog, heavy rain, snow, smoke, or any other atmospheric condition that reduces visibility to 1,000 feet or less. Even if it’s daytime when these low visibility conditions are in effect, you’re legally required to be equipped with lights.

This too is a legal floor below which you cannot venture. You’re required to ride with lights during periods of low visibility, but the law also allows you to ride with lights even during periods of high visibility. Motorcycles are required to be equipped with headlights that automatically engage when the motorcycle is turned on, and newer automobiles are equipped with daytime running lights. Although it’s not required, cyclists are allowed to run lights during the day, and we might even consider them at least as necessary for safety as they are for motorcycles and automobiles.

Legal consequences of riding without light

If you ride without lights when you’re legally required to be equipped with lights, and you get hit by a car, your own negligence will become an issue, even if the driver was also negligent. In some states, a riding without lights violation is prima facie evidence of negligence in a crash (meaning it’s considered evidence of your negligence, but you can rebut it with your own evidence), while in other states, a riding without lights violation is per se negligence in a crash (meaning you will be considered negligent because you violated the law).

I’ve represented cyclists in bicycle injury cases for over two decades, and I can assure you that if you do get injured in a crash, the last thing you want to do is fight an uphill battle with an insurance company because you “broke the law” on what might seem to you like a minor equipment violation, but to the insurance company looks like a way to make you pay for your own injuries and lost income.

Enhancing your own conspicuity

If you want to maximize your conspicuity, you can look into reflective and “Hi-Viz” fluorescent jerseys, jackets, and even helmets. Fluorescent colors are great in low visibility atmospheric conditions such as dawn, dusk, haze, and fog.

But because fluorescent colors need UV light to work, Hi-Viz is significantly less effective at night. So to maximize your conspicuity at night, you’ll want reflective material, because it works when you’re in the beam of a car’s headlights. And the best place to put that reflective material is on extremities and joints.

“Human factors, the science and psychology of human perception, are increasingly finding that humans have subconscious perceptual sensitivity to biological movement,” said Miles B. Cooper of Bicycle Law. “Experts we work with in investigating and preventing crashes recommend reflectivity on extremities and it is part of why we’re seeing helmets with integrated rear red lights.”

Thus, reflected biological motion will help drivers recognize what they are seeing (you, a cyclist!), giving them the maximum time available to respond appropriately to your presence on the road. Those interested in diving deeper into this  research can start with The Conspicuity Benefits of Dynamic and Static Bicycle Taillights at  Night.

Don’t get lost in the glare

There’s one other conspicuity safety issue that every cyclist must be aware of. Two of the most dangerous times for cyclists to be on the road are dawn and dusk, because the sun is low on the horizon, and is blinding to drivers who are facing the sun.

Here’s how you can tell if you’re in danger: If you’re facing into the rising or setting sun on your ride, you’re getting lost in the sun’s glare, and the drivers behind you can’t see you. And if the rising or setting sun is to your back, you’re getting lost in the suns glare for the drivers in oncoming traffic. Even if you’re riding perpendicular to the sun low on the horizon, if you’re crossing an intersection perpendicular to drivers blinded by the sun, it’s critically important for you to understand that drivers probably can’t see you.

Getting lost in the sun’s glare is an extremely hazardous situation for cyclists, and if you’re on the road and getting lost in the glare of the sun, you need to either pull off the road and wait briefly for the angle of the sun’s rays to change, or change your direction and take a different route. Whatever you do, don’t just stay lost in the glare. We’ve lost some very talented and experienced roadies in the blinding rays of the sun’s glare, including John Stenner, Jeff Littman, and Missy Hardeman. Stay aware of the hazard and out of the glare.

Although I routinely remind cyclists to pay attention to their conspicuity at this time of year, attention to your conspicuity in every season and riding condition will enhance your safety and keep you on the road, rubber side down year-round.

Stay safe, and enjoy the season.

Bob Mionske represented the U.S. at the 1988 and 1992 Olympic Games. After retiring from racing in 1993, he coached the Saturn Professional Cycling team for one year before heading off to law school. Mionske’s practice is now split between personal-injury work, representing professional athletes as an agent and other legal issues facing endurance athletes (traffic violations, contract, criminal charges, intellectual property, etc.).

Mionske is the author of “Bicycling and the Law,” designed to be the primary resource for cyclists to consult when faced with a legal question. It provides readers with the knowledge to avoid many legal problems in the first place, and informs them of their rights, their responsibilities, and what steps they can take if they do encounter a legal problem. If you have a cycling-related legal question please send it to Bob, and he will answer as many of these questions privately as he can. He will also select a few questions to answer in this column. General bicycle-accident advice can be found at bicyclelaw.com.