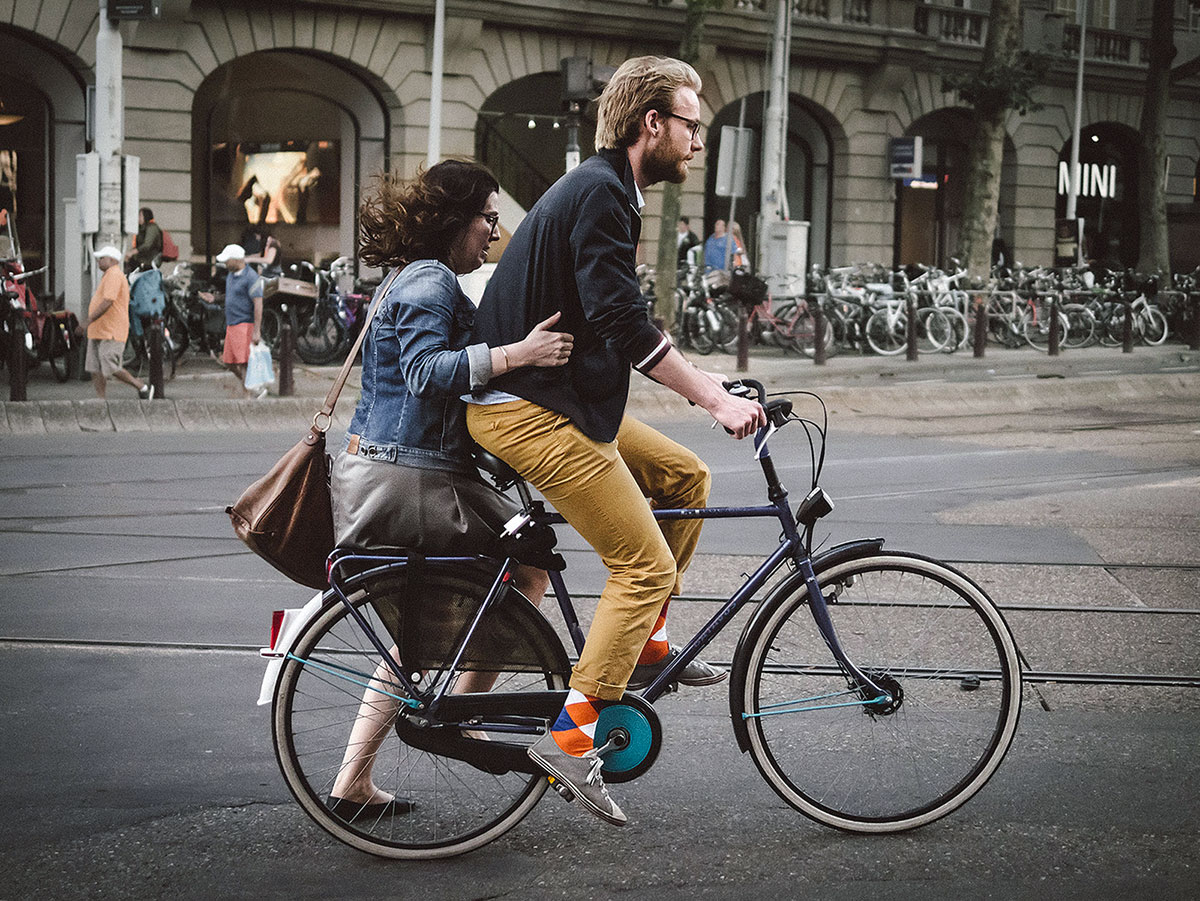 article by Gus at Rolling Spoke

Double riding or carrying a passenger (a.k.a. dinking) is a common, everyday method of bicycling in Amsterdam.

I have an affinity when I see two people together on one bike. Even though I was mildly perplexed at first why someone wouldn’t want to ride their own bike. But after double riding for the first time, I was hooked. My only stipulation is that I get to pedal. Either way, it’s just a fun and sociable way for two people to visit a park, go to movies or head over to a brown bar.

In my wonder, I conducted a survey and created the infographic  below. My observations found that there are four main ways of double riding. I was also interested in the relationship between men and women and included them in my findings. This is my tribute to this iconic biking practice.

Why did you conduct this survey?

How was the survey conducted?

I counted bicyclists carrying passengers over the course of 18 months.

How many bicyclists were counted?

The total number of bicyclists counted is 1500.

How accurate is the survey?

I estimate there is less than a 2% margin of error. I would record five bicyclists at a time to my phone. I found that I could easily remember this number before things get muddled in my head. In cases where I wasn’t  100% certain of the accuracy of the five, I dismissed the count and started again at zero.

Are there more than four ways of double riding?

Yes. But they would constitute less than 1% of the total number of bicyclists with passengers so they weren’t included. Children and young adolescents were also excluded since their bodies can contort into all kinds of positions, creating a low percentage of anomalies.

The four ways of double riding

The classic side-saddle makes up 77%of all double riding in Amsterdam, making it the most common style of riding. It’s the preferred method for women to hitch a ride with their male counterparts. It’s also the most popular way for Dutch dames to ride together. Since a majority of bikes in Amsterdam have back racks, it’s the easiest and most convenient way to travel.

Arguably the most comfortable ride can also be the most difficult in certain instances. Steering can mimic that of a loaded wheelbarrow if the front-rack isn’t attached to the down tube. There is variance with this style of riding, but it can be the most sociable way to travel when the passenger faces the driver.

I refer to this style of riding as the Bullfrog. The dangling legs of the passenger often resemble those of a frog when viewed from behind. With the pelvis right behind the driver’s rear end, it’s  the least feminine way to travel. Not surprisingly, it’s the most common style for Dutch men to double ride together.

The least common but perhaps the most endearing style of riding is with a passenger sitting on the top tube. Women are almost exclusively the passengers. Credit must go to the Dutch bicycle brand Vanmoof that contributes to a higher percentage of this style of riding. The thick, straight top tube provides a more stable ride while being straddled by the drivers arms.