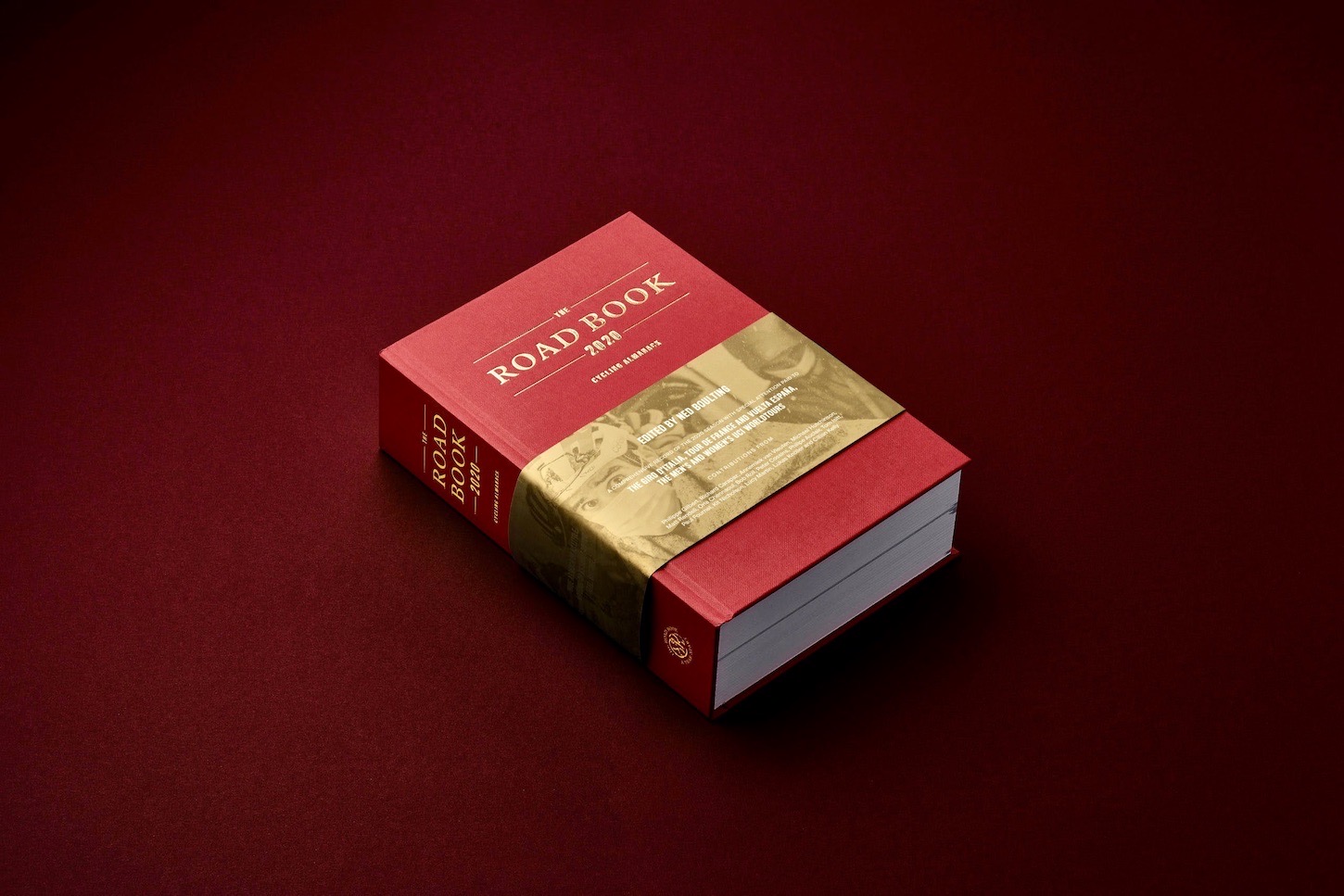 Born in 2018, The Road Book is the first of its kind, supplying data from every single World Tour race across the Men’s and Women’s calendar, exclusive essays, editorial from leading figures within cycling, team profiles, and the kind of considered editorial our readers will dip in and out of for years to come.

In its third year, The Road Book 2020 returns to document the biggest threat to professional racing and how it bounced back from the COVID 19 pandemic to produce some of the most pulsating and dramatic moments in recent memory.

Indeed, the Road Book 2020 recounts in full the unique and destructive events which pressed pause on the cycling calendar and the world. From indefinite postponements and cancellations to renewed hope and distraction, the 2020 edition under extreme circumstances has attempted to shine appropriate light on the global threat that threatened the livelihoods and very existence of the sport.

You know the world has turned itself upside down when the Race of the Falling Leaves takes place before the Grand Boucle. As the 176 starters in the 2020 Tour de France belatedly set out on the winding route from Nice to Paris, many of the sights seemed familiar enough: the leisurely roll-outs, the families hoisting hand-lettered signs reading ‘Vive le Tour!’, the row of cassocked seminarians with their camera phones raised on the road to Villard-de-Lans, the elaborate displays featuring farm tractors created for the benefit of the helicams, and the tributes to the recently deceased Raymond Poulidor as the peloton passed through Saint-Léonard-de-Noblat, the great man’s home village.

Others took on a new and different aspect. In the fields of la France profonde, the heads of the sunflowers had turned brown and the bales of hay were from the second cut of the summer. The sun was lower, and the late-afternoon shadows cast by the riders were long enough to stretch all the way across the country roads.

Autumn sunlight made the 2020 Tour look as strange as it felt. But the colours of a mellower palette provided the back-cloth to 21 days of almost unceasingly vivid action as the hidden tensions created by a pandemic released themselves in day after day of excitement, culminating in a finish of historic proportions. And for those sitting at home around the world, many deprived by lockdown of their annual holidays, the three-week parade around the sights of France – spectacular rock formations like the Pénitents des Mées in the mountains of Provence, a fortified village like Taulignan in the Drôme, the gorgeous Lac de Roselend in the Savoy Alps – supplied nourishment for the soul.

In the end, though, it was the race itself that mattered. Above all, no one will forget the sight of the 21-year-old Tadej Pogačar ascending the climb to La Planche des Belles Filles on the final Saturday like a white-winged angel. In that 36km individual time trial, Pogačar went out second-last of the 146 survivors, needing to make up almost a minute in order to overhaul the final rider, his 30-year-old compatriot, Primož Roglič, in the General Classification. Even before the start of the last climb he had widened the gap on the road between the two, and after both men had switched to their road bikes – Pogačar in a slick exchange, Roglič in a much scruffier handover – a stopwatch became superfluous.

Pogačar, slender and frictionless, seemed the embodiment of youth’s suppleness and inexhaustible energy as he soared up those final 6km. The older man suddenly resembled any weekend warrior labouring home against a gusting wind with a nagging twinge in his back. In just under an hour – having spent three weeks looking in complete control of himself and the race, apparently an athlete at the peak of his powers – Roglič aged a decade. His yellow jersey mocked his efforts as he ground up the climactic ramp, his poorly fitting aero helmet pushed back to reveal even more of his agony.

As last-minute collapses go, it was in a class with Devon Loch, a faller on the final straight while leading the 1956 Grand National by five lengths, and Greg Norman, who blew a six-shot lead on the final day at the 1996 US Masters. Until that moment Roglič had done everything expected of the pre-race favourite, taking an early mountain stage with a confident sprint to a summit finish on the fourth day and then relying on his powerful Jumbo-Visma squad to protect his interests. On the outside, nothing suggested that he was not making his way serenely to the widely predicted first Tour win for a Slovenian rider.

A Slovenian did indeed win, but it was another rider from that country of just two million people who grasped the honour, making a statement on behalf of a new breed of exceptionally talented riders who seem likely to dominate Grand Tours for the next decade. Flanking Pogačar on the final podium, in a repeat of the finishing order at the top of the Grand Colombier exactly a week earlier, were Roglič and the 35-year-old Richie Porte, but it was tempting to see their presence as a last salute from an outgoing generation.

Although the emergence of young riders had been widely discussed in the build-up to the race, it was a 33-year-old who took the first yellow jersey of the 2020 Tour. On the Promenade des Anglais in Nice, Alexander Kristoff’s perfectly timed acceleration took him from seventh to first in the last 100 metres. But that didn’t begin to tell the story of a dramatic opening day. As France’s rate of new Covid-19 infections was said to be increasing exponentially, the riders set off not knowing whether they would be allowed to reach Paris; for a week they raced as though they were playing a game of Pass the Jerseys, in which each evening’s standings might suddenly be made to stand as the final results.