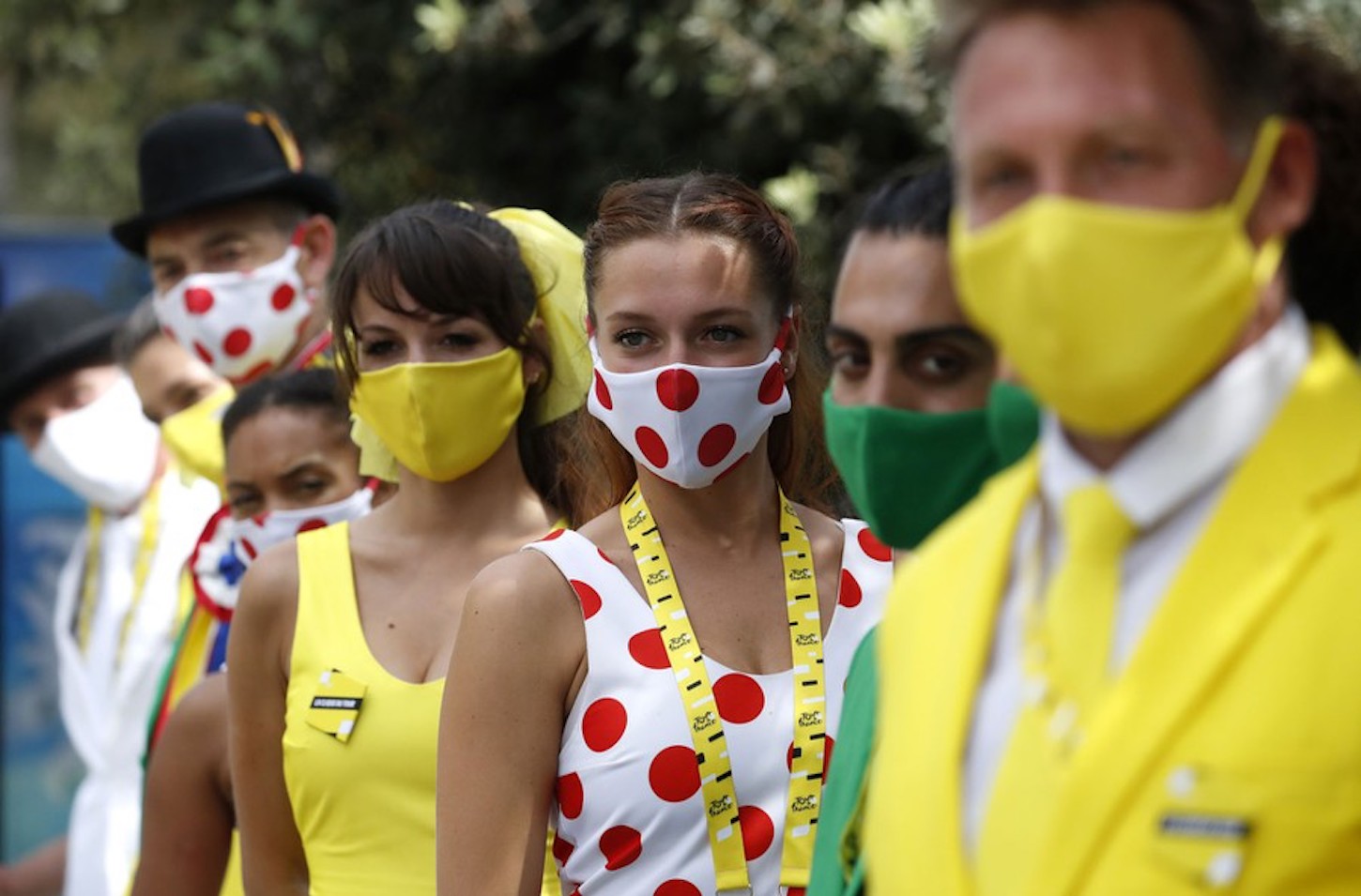 What could happen to team race strategies, or the overall outcome if one or more teams are expelled from the race?  The chaotic 1998 Tour provides some interesting lessons and insights.

News circulating that four teams have returned at least one positive COVID-19 test in their respective “team bubbles” has put the on-going Tour de France on edge. The single case per team is below the two-cases-and-you’re-out mandate of the French Health Ministry, but another case in any of these teams would mean an immediate withdrawal from the race. And given the large crowds witnessed across many of the stages so far – some honoring mask-wearing and social distancing, but many others not even trying – there is the likelihood of more positive coronavirus tests and new outbreaks.

ASO is predictably committed on the race finishing as scheduled despite the circumstances and increasing likelihood of teams having to drop out. Even the French Minister of Sport Michel Blanquer said the chance of the Tour not reaching Paris is “very slim.” These optimistic views have a precedent in the Tour’s modern era – the 1998 edition featuring the Festina affair – where, for different reasons, a significant percent of the teams did not finish the race.  It may be instructive to look back at that event and understand how the ASO guidelines and team abandonments shaped the rest of the race.

First, set aside any of the doping controversies as the comparison point to the current Tour. The Festina scandal started when the team’s soigneur was pulled over with a car full of EPO and human growth hormone (among a verifiable pharmacopeia of related products and syringes). This was in many ways the culmination of cycling’s doping era and was the tipping point in global sport leading to the creation of the World Anti-Doping Agency. While doping still takes place today, it is nothing like the “wild west” of those days – with 60% hematocrit levels, Pot Belge chemical cocktails and complete omerta that defined the mid-1990’s professional cycling milieu.

In terms of where the current race could head, it’s more instructive to think of the rampant and unchecked doping in 1998 as the “disease” afflicting the race, and the equally uncoordinated anti-doping policies and law enforcement responses of the era as the disease risk management policy which shaped the race’s outcomes. Today, the disease is real – a rampant pandemic of a truly frightening virus. As a result, preliminary health policies and unproven risk strategies have been instituted which guide the conduct of the riders, teams, and race organizer to mitigate the potential healthcare impacts.

From this perspective, we can deconstruct how team withdrawals affected the 1998 race and shaped its eventual outcome. The race started with 21 teams of nine riders each, for a field of 189 starting in Dublin. It took until stage 6 for the first casualties of the drug bust – the eponymous Festina team – to be punted from the peloton. That entire team was a roster geared for Tour success.

Richard Virenque was France’s white-headed boy (literally, due to a botched dye-job) and the nation’s emotional favorite to win. But with two-time Vuelta champ Alex Zulle as perhaps the better GC rider, and a supporting cast which included a tactically savvy Laurent Dufaux and reigning World Champion (and mullet king) Laurent Brochard, there were several strategic roadmaps for the team. Festina had the strength to control flat and medium mountain stages, set tempo in the high mountains, or just blow the race apart.

Virenque and Zulle were two key variables of the 1998 Tour formula, and once Festina was expelled, they no longer factored in the other teams’ race plans. This simplified the tactics for some and complicated it for others. For example, time trial powerhouse Zulle wouldn’t be commanding his teammates to keep the race together so that he’d be in striking distance of Abraham Olano (Banesto) or Jan Ullrich (Telekom) for the penultimate stage TT test. Similarly, Virenque would have likely been in attack-mode throughout the race to pick up time ahead of the TTs, so as to (manageably) lose those time gains in his weakest discipline against the clock. Those attacks – although not always successful – could have at least netted another King of the Mountains jersey and helped to keep Zulle’s powder dry for those time trials.

Hypothetically, imagine what would happen if Jumbo-Visma were suddenly pulled from the race today? With potential contenders Roglic and Dumoulin out, would we see a similar recalculation of the other teams’ approach to controlling or attacking through the remaining stages? Would Ineos-Grenadiers simply rise to the top and start imposing their race on the other competitors – and would this lead to informal alliances among the remaining teams to disrupt Dave Brailsford’s proven approach to Grand Tour dominance? Or, if the team kicked out was Ineos-Grenadier instead, how would the rest of the peloton set up its GC stars knowing that one of the world’s best climbers, Egan Bernal, was holed up in a hotel somewhere else?

The strategic shifts in 1998 became apparent in the Pyrenees just few stages later. Ullrich was next in line for yellow due to a predictably powerhouse time trial ride, but without Zulle in the mix (and with Erik Zabel hunting for Green jersey points and stage wins), Telekom had to contribute to controlling the transitional stages, which may have exposed Ullrich’s lack of overall condition too early. Marco Pantani (Mercatone Uno) had already been riding a drama-free race and even though he’d lost a lot of time early, he hadn’t wasted any energy on KOM point sprints either. Second at Luchon and a win on Plateau de Beille positioned Pantani for a run on yellow in the Alps – a run that now would not see gadfly Virenque disrupting his tactics along the way.

The changes also benefit Bobby Julich, who’d had a strong time trial and an unexpectedly strong team around him. Julich came out of the Pyrenees sitting second on GC, and the only stress he had to deal with was whether or not his own teammate (and eventual 4th place and overall KOM winner) Christophe Rinero would hamper his quest for the podium by isolating him in the hunt for polka dot jersey points.

Over the next few days, Pantani continued to conserve energy, Julich and Ullrich cagily stayed close on the road, and opportunists took the spotlight. But arguably, the lack of Festina at the front and a TT foil like Zulle forced Ullrich and his team to control the favorites, sapping him and his team of energy ahead of two key Alpine days. And on the first to Les Deux Alpes, Pantani detonated the entire race, recouping nearly nine minutes on Ullrich to take yellow, and keeping Julich at enough distance to have breathing room for the final TT. The next day to Albertville, Ullrich came out swinging but only succeeded in the stage win and getting to within striking distance of Julich’s second place.

But then the other shoe dropped. Already reeling from rider confessions and additional rider arrests, the TVM team was detained and held overnight prior to the mountainous 17th stage to Aix les Bains. Laurent Jalabert and other peloton leaders held stoppages in protest of rider treatment at the hands of French police, and then-Tour Director Jean Marie Leblanc had to secure a guarantee from national authorities that further mistreatment would not happen for the rest of the race.

By this time, the damage was done, but it provides us with some insight into whether or not a Tour can be legitimate if not all the teams finish the race. First, Jalabert withdrew, then his ONCE team, Banesto, and the Riso Scotti teams all pulled out at the feed zone. The stage was nullified by Leblanc, with no winner recorded. Later that night and into the next day, TVM, Kelme, and Vitalicio Seguros all exited as well. Arguably, Jalabert was not going to be a serious contender at that point in the race and Olano was below his best, but Fernando Escartin (Kelme) was lying in fourth place overall at that moment and ONCE, Banesto, and Kelme were three of the most stacked high-mountains teams in the race.

With so many contenders out in one swift act of protest, the race fell to the shoulders of Ullrich (out of yellow but not out of the Tour), Julich (contending) and Pantani (in yellow). There was simply no one else left.  Several riders unexpectedly found themselves in the top 10 of a Grand Tour and never reached that lofty hype again, such as Rinero (4th), Michael Boogerd (5th), Daniele Nardello (8th) and Axel Merckx (10th). Ullrich overtook Julich for second place on GC in the final TT, and Pantani surprisingly (at the time) lost very little ground to either rider. The race finished on time in Paris and the most controversial Grand Tour of the era was in the books – at least until Pantani was booted from the ’99 Giro a year later while in the maglia rosa.

The 1998 Tour was a toxic mess of doping and politics, but was nevertheless illuminated by the performances of the riders who were left standing after stage 17. There are still a lot of “what if’s” from that race. Could Julich have carved some more breathing room ahead of the TT and preserved 2nd place? Would Rinero have factored at all in the KOM competition in a race that included Virenque? And would Zulle have been close enough to disrupt the final podium?

There will likely be a similar treasure trove of race stories, if only a partial 2020 Tour de France peloton reaches Paris. And that is the biggest “what if” of all. Fans need to honor mask-wearing and social distancing if the current tally of four COVID-19 positives the bubble entourage is to remain stable. Even though the testing system seems transparently “rigged” in the race’s favor (the potential expulsions click in with two positive tests within seven days, but the tests are eight days apart) the potential for significant disruptions is still there.

The 1998 Tour’s critical moment came before stage 6 finished – with Virenque bawling his eyes out, consoled by his teammates in a widely televised moment that conveyed the sadness of a tainted Tour – a race he could have featured in was already racing ahead without him. We are barely halfway into the summer’s best three weeks of action. The Tour de France can survive and tell an epic story even with just half a peloton; in fact, a smaller race would perhaps display some of the most daring tactics and audacious attacks in recent history, like Pantani’s epic 1998 raid on stage 15. One can imagine a 2020 Tour that doesn’t follow a recognizable ‘script’ – a Tour without a dominant team and traditional alliances at play on the open road. But if the race stopped now, should we declare a winner? That same question faced then-Director Leblanc 22 years ago, and let’s hope his successor Prudhomme (now sitting in isolation with his own case of the virus) won’t have to answer it either.