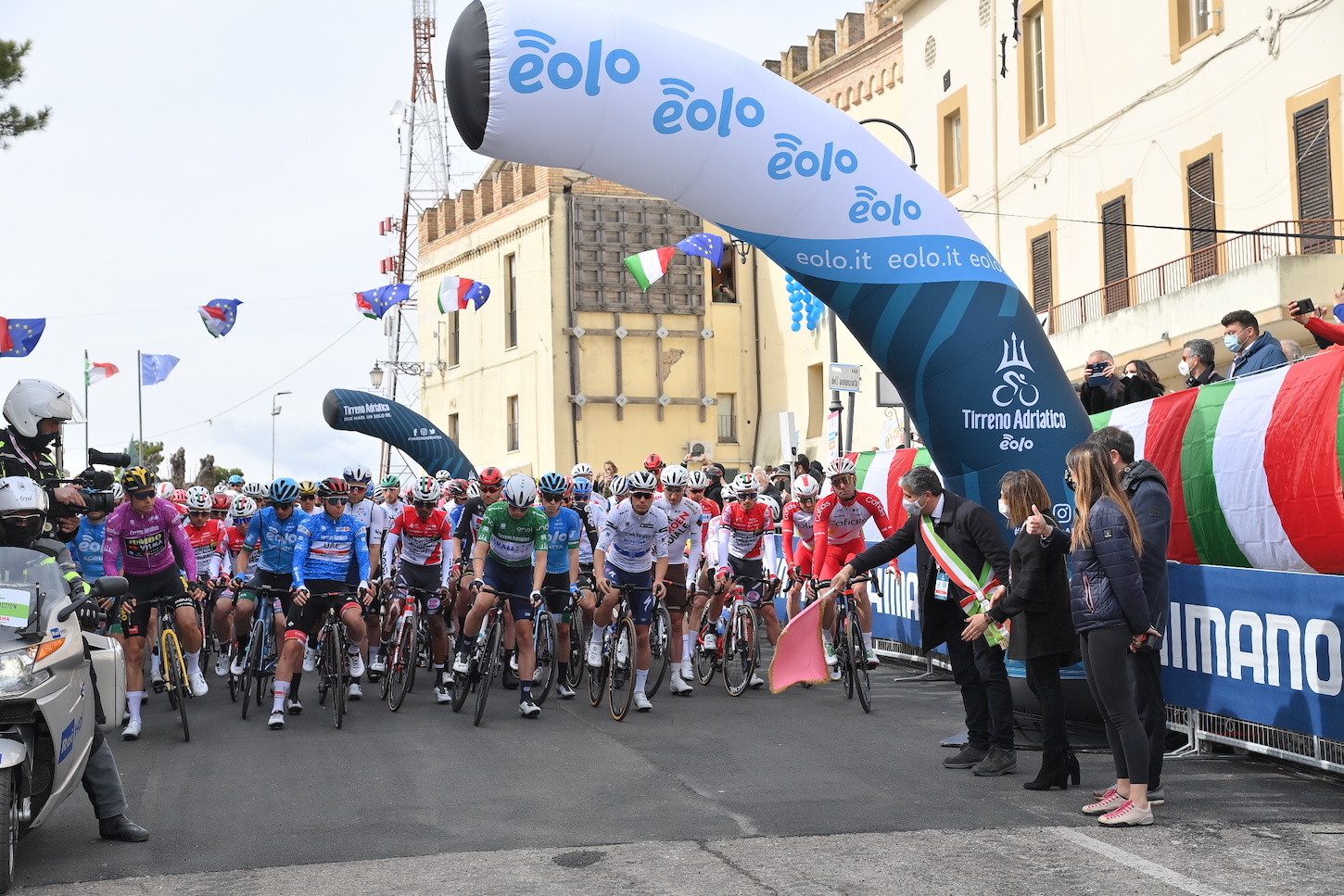 The Slovenian rider attacked with 17 kilometers to go along the final, steep slopes of the Castelfidardo to put in a valiant pursuit of the Dutch champion, slashing a three-minute gap that van der Poel had built up during his long-range attack.

“I was riding completely on empty in the last few kilometres. I was told that Pogačar was coming close but I wasn’t even able to listen. I just wanted to reach the finish as fast as I could,” Van der Poel said. “I’m happy with the win. I attacked from far away because I was cold and I felt good until 20 kilometers to go.”

Their advantage continued to fall from there, as Valentin Madouas (Groupama-FDJ) and Chris Juul-Jensen (BikeExchange) jumped away from the main field in pursuit of the leaders.

It wasn’t long before things became animated back in the peloton, with van der Poel putting pressure on with Wout van Aert, Tadej Pogačar and Julian Alaphilippe with a fierce pace.

Rickaert and Ballerini were soon dropped from the group, as van der Poel had thinned the bunch down to around 10 riders, and then it was day over for the break as the Dutchman attacked to catch and pass them.

Van der Poel continued upping the pace for the next couple of kilometers before the GC guys behind made contact again, with the group now swelling to around 20 riders.

Bernal was the next to attack. But, Higuita, Pogačar and Van Aert managed to close down his move, while van der Poel decided to take a backseat this time.

As the quintet pushed on, van der Poel decided to set off once again.

Pogačar then suffered a mechanical problem, but he was able to quickly recover, while van der Poel had opened up a 20 second lead with just under 50 kilometers remaining.

Van der Poel’s margin continued to increase for there, swelling to 35 seconds, as Van Aert jumped ahead at the finish line to take a second back from Pogačar.

With 40 kilometers to go, van der Poel’s gap had increased to over a minute.

With van der Poel now holding more than a three minute lead with less than 20 kilometers to go, Pogačar launched his attack. Wout van Aert couldn’t respond, as Landa got on the Belgian’s wheel who fought against the gradient in vain to try and get back on terms.

The Slovenian had soon caught Felline and Soler, leaving the duo riders behind during the final 10 kilometers.

The group as soon joined by Van Aert, later reducing van der Poel’s lead to under a minute and a half.

With 3 kilometers to go, the gap was now under a minute. But, despite his obvious sign of exhaustion, van der Poel clung on to cross the line by just 10 seconds.

Meanwhile, Pogačar extended his lead to more than a minute over Van Aert in the overall race standings.