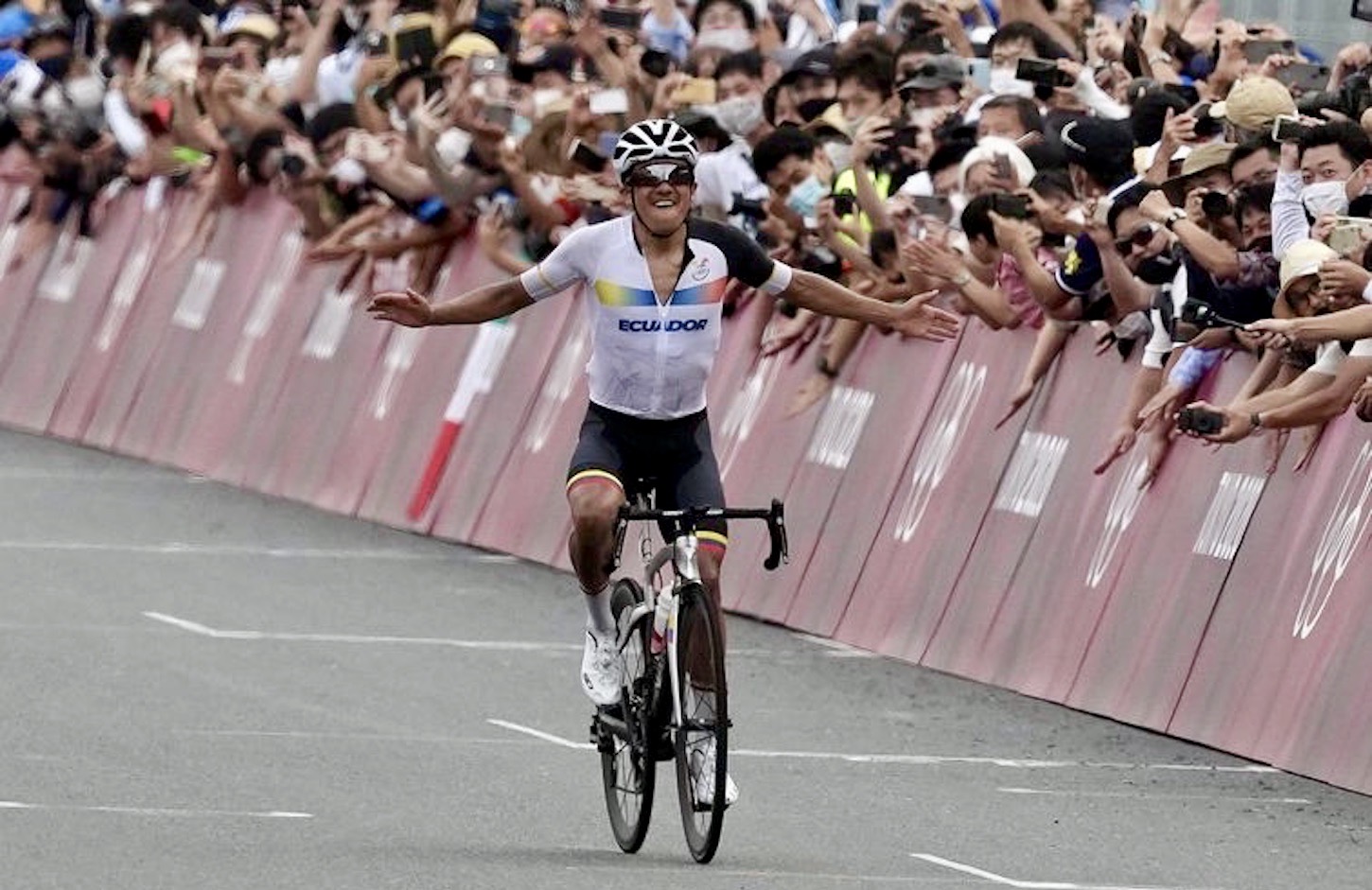 Ecuador’s Richard Carapaz has won the cycling men’s road race in spectacular fashion to be crowned Olympic champion. With 25 kilometres to go the new gold medallist raced to the front along with the USA’s Brandon McNulty, with the two leaders putting more than 30 seconds between themselves and the first chase group. However, with six kilometres left Carapaz seized his chance, breaking away from a tiring McNulty on an uphill climb before storming to victory as the race came to an end on the former Formula 1 track, the Fuji International Speedway.

Carapaz, who became the first Ecuadorian rider ever to win the Giro d’Italia in 2019, won the race by one minute and seven seconds, the competition failing to live with him in the closing stages.

As he looked over his shoulder on the finishing straight, no other rider was close and he crossed the line to become Ecuador’s second-ever Olympic gold medallist.

Behind Carapaz, a group of riders battled for the silver and bronze medals, with Van Aert – a pre-race favourite due to his versatility as a rider – and 22-year-old Pogačar finely poised to take the sprint finish to the final metres of the race. In the end, it was Van Aert who secured the silver medal, beating out Pogačar by the slimmest of margins in a photo finish.

After the race, Carapaz spoke with pride about winning the gold medal: “The truth is it is an incredible moment that words can’t describe,” he said, before adding: “To my country, the truth is you have to believe, no? I have worked so hard to get here. I’m here, I’m enjoying — it’s something so big for me. And simply thank you for the support which truthfully really helped me get here.”

Defending Olympic champion Greg van Avermaet, who triumphed in stunning fashion along Copacabana Beach five years ago, quickly went to the front for Belgium, setting a punishing pace through the foothills of Mt. Fuji, sacrificing his own ambitions to position van Aert and fellow teammate Remco Evenepoel for a run at gold.

Slovenia also pushed the tempo as it tried to set up Pogacar and Primoz Roglic, two of the prerace favorites.

Another rider with medal aspirations, Britain’s Geraint Thomas, crashed hard near the base of the first climb. His shoulder bloodied with road rash, the 2018 Tour de France winner eventually dropped out with 60 kilometers to go.

The peloton began to thin as it climbed the lower slopes of Mt. Fuji, the searing heat and humidity coupled with the brutal pace ejecting riders right off the back. But the real fireworks began as it headed up the steep slopes of Mikuni Pass, where gradients up to 17% left dozens more riders with anguished faces awash in sweat and grime.

Pogacar finally launched an attack, and initially only two riders could go with him: Woods, a former runner and one of the breakout stars of the Tour, and the 23-year-old McNulty, who had been overlooked by just about everyone.

The trio was caught before the summit, though, and a dozen contenders were left to mix it up for the medals.

Carapaz wound up riding all the way to the top step of the podium.