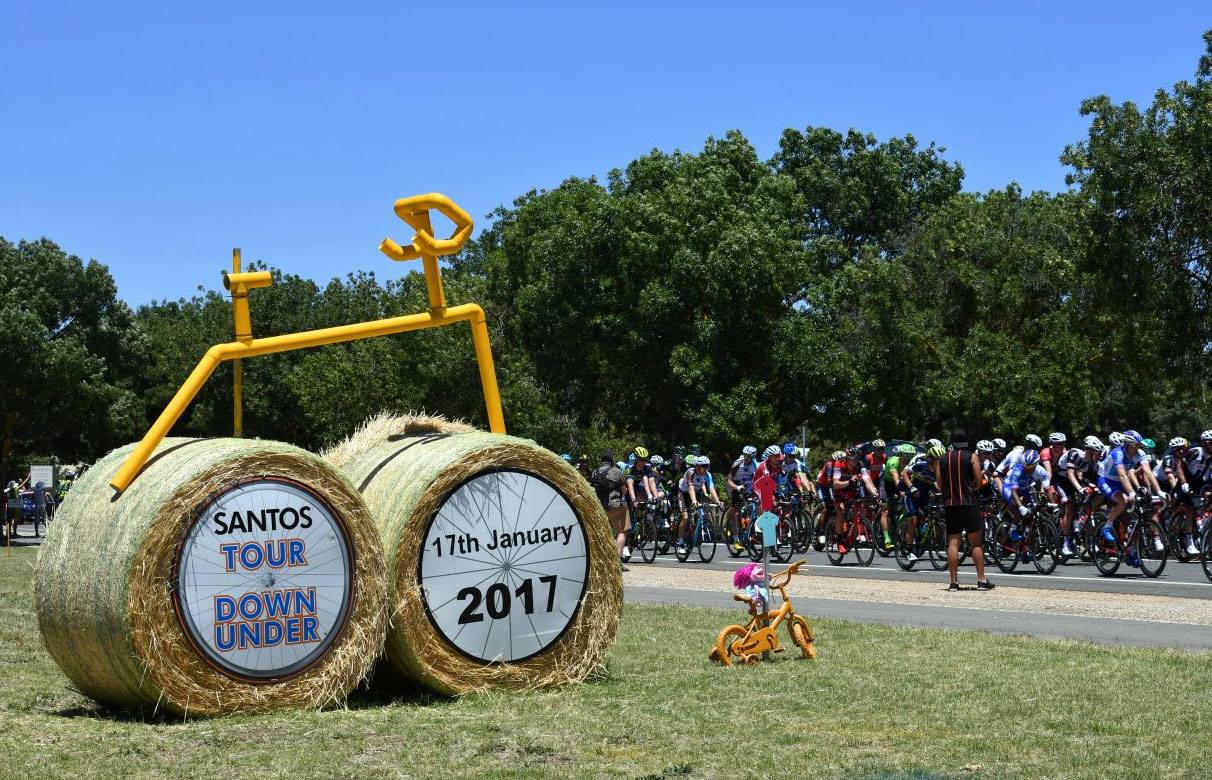 Australian Caleb Ewan has powered to victory at the end of a shortened Hostworks Stage 1 of the Santos Tour Down Under from the cosmopolitan Adelaide suburb of Unley to the Barossa Valley town of Lyndoch.

The 22 year old ORICA-SCOTT rider edged out Dutchman Danny Van Poppel (Team SKY) and Irish cyclist Sam Bennett (Bora-Hansgrohe) to win in a time of 3:24.18 after 118 kilometers of racing.

Midway through today’s racing organizers announced the stage distance would be reduced by 26.5 kilometers, or one lap of the finishing circuit, due to extreme heat with hot winds and soaring temperatures above 40 degrees making conditions challenging for the 133 riders in the opening stage of the six day race.

“Everyone felt the heat out there today and to have the race shortened a little bit is what we needed,” said Ewan after adding today’s win to his victory in Sunday’s People’s Choice Classic. “I’m super happy to get that win because it was very tight in the end.

“A lot of riders ran out of gas in the lead out in that last straight because there was a lot of head wind there,” he explained. “Many riders misjudged it and it was a super messy sprint.”

Ewan, who also won the opening stage in 2016, says his ORICA-SCOTT team might not have the manpower to match some of the other teams but they are making tactics work in their favor.

“We have two ambitions in this Tour and we really have to use our guys conservatively and take the best out of them,” said Ewan who is sharing team support with Simon Gerrans who is hoping to defend his 2016 crown. “They did an amazing job at the end.

“It’s going to be a really nice feeling to have the leaders jersey tomorrow.”

Van Poppel was happy to be in the placings after a disappointing hit out on Sunday.

“I can be satisfied with second, because I was really bad in the criterium on Sunday,” said Van Poppel. “The guys did a great job for me and I really had a lot of horsepower out there in the front working for me.

“My plan was to go late [in the sprint], and maybe I went a little too late,” he admitted. “It was really hot today.”

“At the start of the stage, the plan was to make the sprint with Peter [Sagan], and I was there to lead him out today but once we were into the stage, about 20km to 30km in, he asked me how I was feeling,” explained Bennett. “I said I didn’t feel great, but he decided we would go for me. It’s a great compliment that Peter puts his trust in me.”

“I should have gone with 200m to go, but I couldn’t jump when I wanted to, so you live and learn,” said Bennett. “It’s hard to try to catch Caleb [Ewan].”

The decision to shorten the stage was welcomed by the peloton who found it tough to race at their full potential in the conditions.

“The safety and welfare of the riders, spectators and everyone involved with the race is always our primary concern,” said Race Director Mike Turtur. “We consulted with rider representative Adam Hansen (Lotto Soudal) and with our Chief Commissaire Alexander Donike, and both agreed it would be sensible to shorten the stage distance.”

“I had quite a few riders speaking to me during the stage,” said Hansen. “When we were going slow, you could already feel the heat, but when we were going fast or making a hard effort, it was really too much.

“A lot of guys said they couldn’t have finished [the full distance]. I think this was the hottest Tour Down Under stage I’ve done, that’s probably the hottest road race I’ve ever done. On my bike computer, I had 47.5C, and a teammate said he had 51C.”

“I think it was brilliant that the race organisers respected the riders,” said Porte. “I think that was the hottest day I’ve had on the bike…. I’ve never ridden in anything quite like that and even in the shade it was hot.”

Despite the change the impact of the heat meant the riders still arrived at the finish close to the published finish time.

At the start of the day it was Astana rider Laurens De Vreese (BEL) who launched a solo attack three kilometres into the race but was disappointed no-one else joined him.

“In the morning of a stage, you never know what can happen,” said De Vreese. “Someone has to be first to attack for a breakaway to take shape. I attacked but nobody followed.

“I spent a lot of energy because it was a headwind most of the way and I knew if they rode together at the head of the peloton they’d catch me when they’d like to,” said the Belgian who, unlike his fellow riders, relished the hot conditions.

“I never gave up. I’m here to move my condition up and this hot weather is good for burning calories. I really like Australia.”

De Vreese sailed over the climb at Humbug Scrub, 38 kilometres into the stage, to secure the lead in the Subaru King of the Mountain classification ahead of compatriot Thomas de Gendt (Lotto Soudal) who led the peloton and another Belgian rider, Jan Bakelants (AG2R La Mondiale), who was third over the hill.

De Vreese hung on to his lead win the first iiNet intermediate sprint at the 75 kilometer mark. He picked up points and a three second time bonus at Cockatoo Valley before the peloton upped the tempo and chased him down.

He was caught just before the second sprint at the 101km mark where Australia’s Jay McCarthy (Bora Hansgrohe) took the bonus ahead of José Gonclaves (POR) of Katusha with defending race champion, Simon Gerrans (Orica-Scott) in third.

Bakelants tried his luck in front after the sprint and Hansen surged in pursuit but they failed to connect.

“I thought I had chosen the right moment to attack to try to surprise the field,” said Bakelants. “Then the wind changed direction and I knew it would be impossible. I am really disappointed because I thought I had the legs to try to make it all the way. They caught me with 2km to go.”

Once the bunch regrouped the scene was set for a sprinters’ showdown.

Earlier in the race Frenchman Johan Le Bon (FDJ) crashed and was taken to hospital for assessment. Race Doctor, Mark Fisher, says Le Bon is being assessed at Royal Adelaide as a precaution for possible concussion and is expected to be there for the rest of the day.

“In conditions like this there is always a concern about possible heat stress so it was a sensible decision to shorten the stage,” said Fisher.

The 148 kilometer Staging Connections Stage 2 will start in the Adelaide Hills town of Stirling island sweep through the town five times before setting off for a sharp descent on Norton Summit and the climb up Torrens Hill Road to the finish at Paracombe.

Ewan will take a narrow four second overall lead into day two as well as the lead in the iiNet Sprint Classification and the Best Young Rider rankings. De Vreese leads the Subaru King of the Mountain standings and Bora Hansgrohe is on top of the Wilson Parking Teams competition.