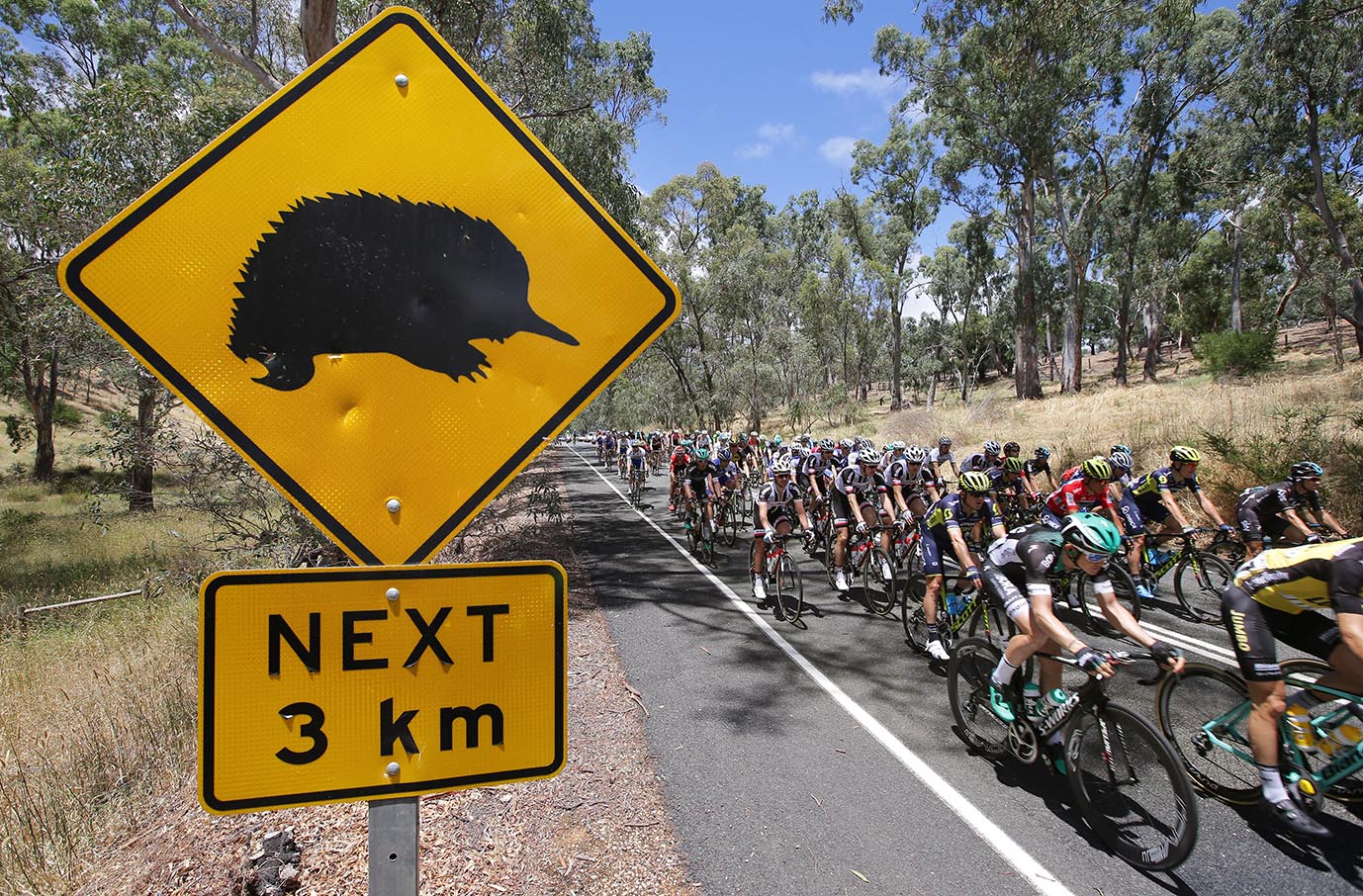 Caleb Ewan flashed across the finish line of BUPA Stage 4 in Campbelltown today to claim his third win of this year’s Santos Tour Down Under.

Campbelltown was awash with bicycles even before the professional peloton powered into town as 5718 cycling enthusiasts put their skills to the test on the Bupa Challenge Tour just hours before the professionals tackled the ride from leafy Norwood. They are part of the 119 thousand fans who came out today to cheer on the race.

The 22 year old ORICA-SCOTT star treated them to a thrilling finish proving again to be too quick for World Champion Peter Sagan (Bora Hansgrohe) with Dutchman Danny van Poppel (Team SKY) third across the line.

“It was a tricky one, because it’s hard for a lead-out train to stay together down through The Gorge,” said Ewan who had to navigate his way through the sprinting stampede to find a clear path to the line.

“I wasn’t panicking (when boxed in), and there was still a fair way to go, and luckily I got out,” explained Ewan. “Once I got out, I could open up my sprint.”

The young Australian sprinter, who covered the 150 kilometer route in a time of 3:45.19, says he is stronger than last year when he won two stages of the race.

“I am not fatiguing like I used to and I can bounce back stage after stage,” said the pint-sized powerhouse who aspires to be the best sprinter in world cycling. “You don’t always get it right. Today, I went a little later than I hoped but I was able to get around Danny (Van Poppel).”

Twenty three year old van Poppel, who launched his sprint with 200 meters to go, concedes the strongest man won on the line.

“It was a hard finish and it was better for me with an uphill finish,” said van Poppel. “I do not think there is shame to be third behind those names.”

“I felt I had good legs but if you wait too long everyone comes from behind and that’s what happened the other day, so I did not want to wait.”

“This is my first race and Ewan is already busy for a long time,” he said. “My shape is getting better and better, and of course, we will try again Sunday.”

Meanwhile Sagan continues to challenge for the win as his new team fine-tunes his lead out train.

“We will see how it is going,” said Sagan when asked if a win on Sunday was possible for him. “We still have tomorrow one stage, it can be good. Every day is better – (our team work) exquisite.”

The stage result did nothing to impact the overall standings with Tasmanian Richie Porte maintaining his grip on the Santos Ochre Leaders Jersey.

“Yesterday and today there was so much to lose but nothing to gain for me,” said Porte. “To have them done is a massive relief for me.”

Porte, 31, has won tomorrow’s Queen stage up Willunga Hill for the past three years but this is the first time he goes in as the race leader.

“It’s a different scenario this year going into it (because) it’s not about the stage win tomorrow, it’s about winning the overall classification,” Porte explained. “We have a great team and I’m pretty relaxed with where I’m at. If they want to hit out early, we have a team to control (it).

“We also have Rohan Dennis who is strong and motivated. He’s racing at his best so I’m optimistic,” said Porte of his compatriot and the 2015 race champion who currently sits sixth overall at 29 seconds.

Spaniard Gorka Izaguirre remains second overall, 20 seconds in arrears, despite a tough day in the saddle. The Movistar rider lined up this morning swathed in bandages due to nasty road rash from this high speed crash in the closing kilometers of yesterday’s stage into Victor Harbor. He was assessed at Royal Adelaide Hospital after the crash and this morning the Race Doctor cleared him to continue the race.

The 132 strong field rode out from the main street of Norwood under neutral conditions for the first eight kilometres but as soon as the flag dropped the attacks began.

An early incline put some of the riders under pressure but up in front a trio managed to slip clear.

Czech rider Ondrej Cink (Bahrain-Merida), Cameron Meyer (UniSA Australia) and Jack Bauer (Quick-Step Floors) were soon more than a minute ahead of the peloton which made Cink, 57 seconds off the time of Porte, the virtual race leader on the road.

After 25 kilometers of racing the gap had grown to 2:25 with the Subaru King of the Mountain points of the day decided on the steep 600 metre Category 2 climb up Checker Hill. Cink, a former mountain biker, collected the maximum points ahead of Meyer and Bauer.

Recognising the danger to Porte’s overall lead the BMC Racing Team hit the front to ride tempo and keep the escapees within striking distance.

The first of two iiNet intermediate sprints was contested at the 37 kilometer mark in Birdwood with Bauer grabbing the points ahead of Meyer and Cink. 50 kilometers later the trio were still ahead and this time Meyer was first across the line for the sprint into Mt Pleasant with Bauer second and Cink third.

Not long after the sprint Meyer and Bauer left Cink in their wake and 45 kilometers from home the gap from the lead pair back to the bunch was 1:30 as they worked well together to maintain their advantage.

Cink was soon overtaken by the BMC led peloton before Lars Bak (Lotto Soudal), Will Clarke (Cannondale-Drapac) and Astana rider Michael Valgren set out in pursuit of the leaders. A puncture ended Clarke’s chase and not long afterwards a fast moving main bunch swamped Bak and Valgren.

Out in front Meyer decided his day was done but Bauer put his time trial skills to work in a bid for glory.

“My intention was to go into the breakaway today but it was always going to be hard,” said Meyer. “We needed a tail wind in the last 5km to stay away and it didn’t work out. There was too much head wind and too many people wanted a bunch sprint finish.”

Bauer soldiered on alone and 25 kilometers from home he still held a 45 seconds lead but a victory wasn’t to be. Five kilometers from the finish his day was done as the speeding peloton caught him.

“It’s the only stage of the week I thought the break was going to have a chance to succeed,” said a disappointed Bauer after the stage. “Two years ago (Jack) Bobridge shelled everybody off. Obviously it wasn’t the same stage but the same finale.”

“We never had enough road really to fight for the stage but I was going to attack anyway.”

His team director Rik Van Slyke was pleased with Bauer’s efforts despite it not bringing the desired result.

“The other riders ran out of energy, but it is always if, if, if … It is also early in the season, so no one wants to let people get away too much.”

“Jack was very strong…and he wanted to try something this week, and today was his day,” said Van Slyke. “Unfortunately, he could not make it with a victory, but for me, his efforts today is like a victory. If you do not try, you do not win.”

Bauer and Meyer shared the Most Competitive Rider of the day honors as a reward for their efforts.