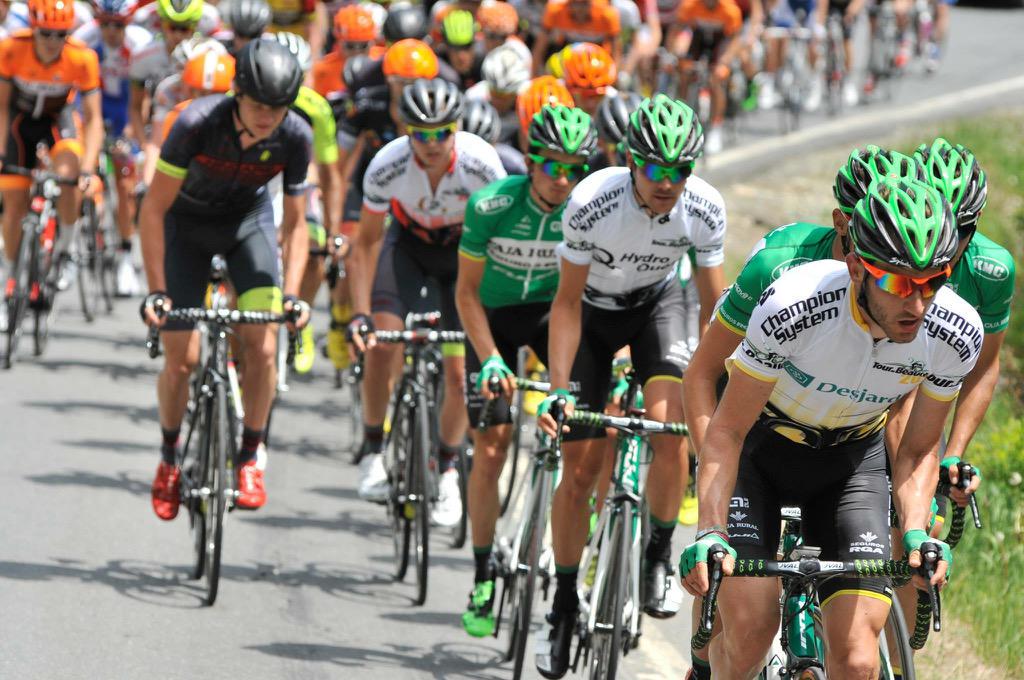 It was said they were strong in the mountains, and they have proved it during the second stage of the Tour de Beauce, starting from Lac-Mégantic to reach the summit of Mont Mégantic National Park.

Amets Txurruka and Pello Bilbao repeated the feat of their two team-mates accomplished the day before, taking the first two places while the overall winner of the Tour last year, Tom Skujins (Hincapie), took third place. It also took a “photo-finish” to decide between the second and third places.

The 169-kilometer race reached its conclusion in the ascent of Mont-Mégantic after a breakaway of two riders was caught. Guillaume Boivin (Optum-Kelly Benefits Strategies) did his share of the work in the break in the company of Robin Carpenter (Hincapie Racing Team) and Jack Bobridge (Team Budget Forklifts).

“We rode 80 kilometers in a breakaway and the rider from Hincapie seemed strong, but I knew that if we made to the bottom of the climb, I was confident he would let me go. For a chance at the top, he would have needed two and a half minute gap. The Caja Rural team had to work hard to bring its riders at the bottom of the hill. Optum was working for Michael Woods and Philip Gaimon.”

An accident involving a dozen riders changed the entire Optum strategy. Three of the riders of this team, including Woods and Gaimon, were taken out of contention in a crash. “It happened just before me,” mentioned a very banged up Woods, but who nevertheless completed the stage.

“I was like Superman,” Woods mentioned. “I flew over some riders before taking me down. My bike went into the ditch and by the time that I got to jump in the saddle, the main group was already too far ahead for me to rejoin. It was too late. But it was the ideal situation for me, everyone on the team worked hard and I felt in better shape than last year. I’ll try to race hard in the last two stages, which are good courses for me.”

Stage winner Amets Txurruka fought a good fight to Tom Skujins in the last two kilometers. “I attacked in the final kilometer, he said. I am very comfortable in mountain races and once again the team did a lot of work at the front of the pack. We were in all the attacks. Tomorrow in the time trial, it will be more difficult for me, I’m not the best in this kind of race.”

This victory allowed Txurruka to don the yellow jersey, which his compatriot Carlos Barbero won the day before.

The fight with Tom Skujins was sustained for several minutes. “It was tough all day,” said the man who had won the stage of Mont-Mégantic last year. “I knew we would not be too fit at the foot of the mountain. I attacked with three kilometers to go and Txurruka followed me. I felt he was stronger than me, and he dumped me with a kilometer to go.

“Then, I was edge by Bilbao at the finish line. Nevertheless we are not far and the whole team is still there. The general classification will be played in the last two stages. I hope I can repeat my last year’s crown, or it could be Dion Smith, who is strong in the time trial.”

Big day Friday with the time trial race in the morning, in Saint-Georges, and the spectacular evening criterium in downtown Saint-Georges.