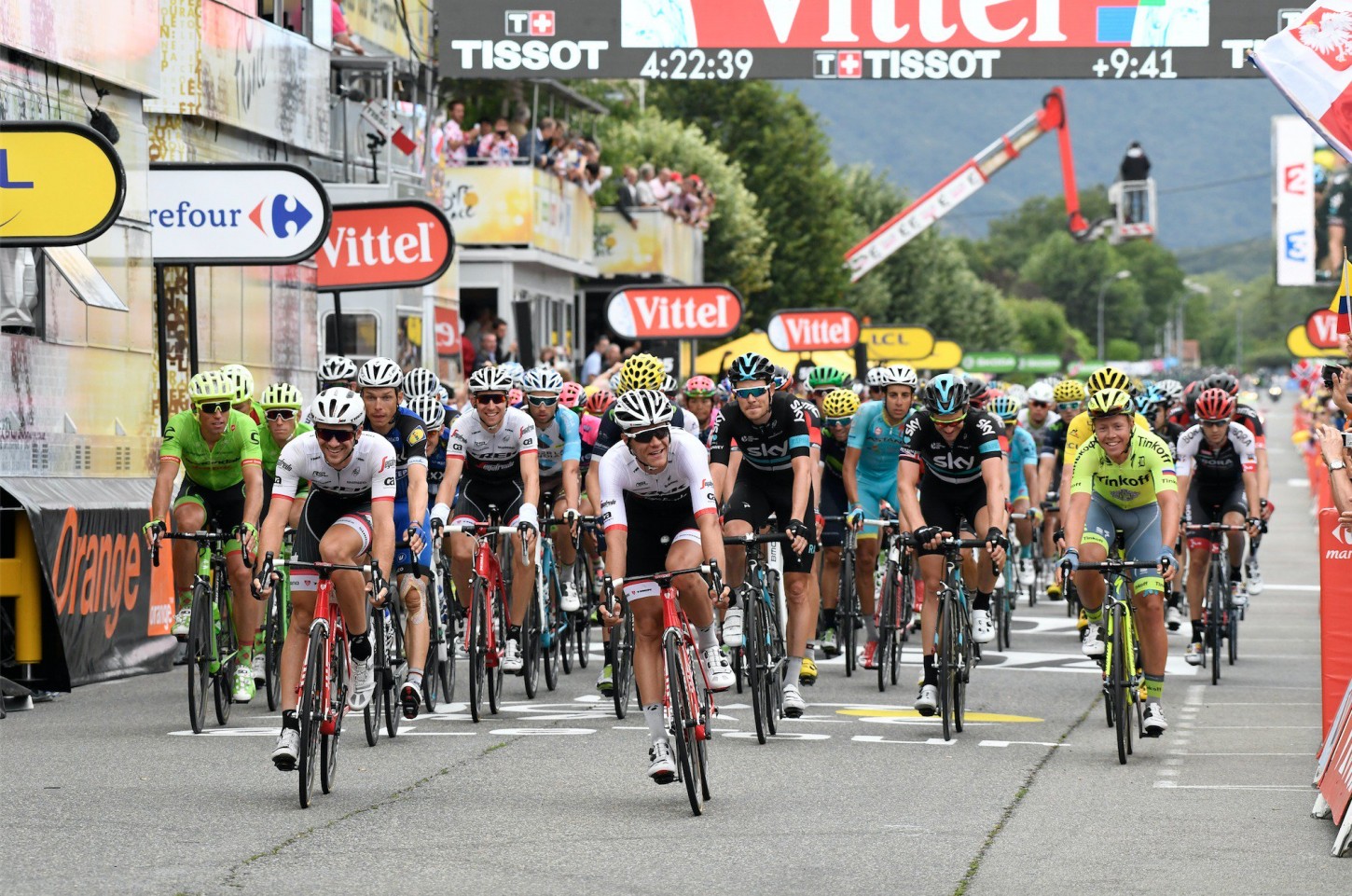 Michael Matthews (Orica-BikeExchange) claimed the first Tour de France stage victory of his career today, after winning stage 10 in Engordany, following a hotly contested sprint that saw the Australian rider hold-off World Champion Peter Sagan and a small group of other riders in a mad dash for the line.

Matthews’ teammate Daryl Impey was leading out the six-rider group just as Greg Van Avermaet (BMC Racing) decided to unleash his sprint during the closing 200 meters. However, Matthews was quick to counter the Belgian rider’s aggressions, while Sagan struggled to follow the Orica-BikeExchange rider’s final surge.

Meanwhile, Edvald Boasson Hagen (Dimension Data) came across the finish in third, to round out the podium.

“It’s just sinking in actually,” said an elated Matthews. “I just won a stage of the Tour de France after two really bad years in this race. I was really close to giving in on this race. I just thought this race is maybe not for me and I’d focus on other races. But today my dreams came true.”

“We were hoping to have a bunch sprint in the finish after the hard climb coming into the final,” he said. “We have such a strong group of guys here. The way we work as a team, whoever’s up on that day we give that rider 110 per cent. You could see Luke Durbridge and Daryl Impey today – they gave me their everything. There are no words.”

“I used a lot of energy during the stage because the breakaway was like, OK, nobody wants to go full, and a lot of guys don’t want to work,” the world champion said. “I was trying to keep everybody turning. I attacked in the crosswind and we split in the last 25km. I then did a lot of attack in the climb.

“When the guy from Orica attacked a lot in the last 3km and I always chased, like all the work was on me in the final. I was second. I’m happy for Michael to win a stage in the Tour de France, and I’m happy for my points in the green jersey.”

The opening of today’s stage was punctuated by a flurry of attacks sparked by Sagan, who managed to ride clear of the peloton, before being quickly reeled back in.

From there, Rui Costa (Lampre-Merida) was the next rider to escape at the top of the day’s first climb, only to be joined by Sam Dumoulin (AG2R La Mondiale) and Vincenzo Nibali (Astana), while other riders attempted to bridge their way across to the three leaders during the descent.

Cohesion amongst the breakaway group would later serve to earn the escapees a maximum lead of seven minutes over the chase.

However, a determined peloton continued to chip away at their advantage, soon bringing it down to a more manageable 4:45 during the last 36 kilometers.

With the peloton now looming at their back door, seven members of the breakaway decided to jettison the group at the 20 kilometer mark.

Heading into the final 12 kilometers, the seven leaders were still maintaining almost a two minute gap over their former breakaway companions, who in turn were still holding on to more than a six minute lead over the peloton.

Not long after, more attacks got underway in the lead group, with Durbridge being the first rider to get dropped.

From there, Impey proceeded to repeatedly attack the group during the last 5 kilometers, with Sagan putting in a few subsequent attacks of his own.

At one point, Sagan took over the pace setting during the closing 4 kilometers, only to receive but another series of challenges from Impey.

Impey then led into the final kilometer, with Sagan on his wheel, followed by Matthews, who ultimately outsprinted his rivals to seize the stage honors.

In the meantime, race leader Chris Froome (Team Sky) finished safely in the peloton to retain his grip on the overall race lead, with a 16 second margin over Adam Yates (Orica-BikeExchange) followed by Daniel Martin (Etixx – Quick-Step) – three seconds further back.