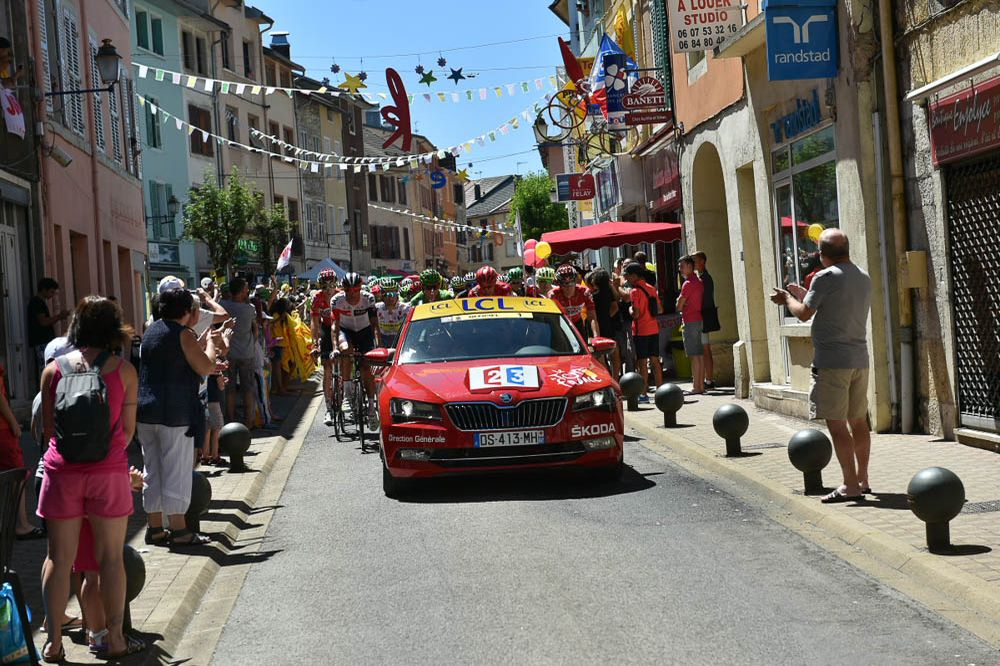 Peter Sagan (Tinkoff) claimed his third Tour de France stage victory Berne Switzerland today, in a dramatic sprint finish that ultimately awarded the World Champion the stage honors after a photo finish revealed that he had beaten Alexander Kristoff (Katusha) by a matter of millimeters to seize the win.

“It was a very long stage, it was very hot. I’m so happy, and so proud of my team because they did a very good job. I’m so happy to win for them, and for Tinkoff and Oleg [Tinkov]. It’s unbelievable. A lot of times I lose races like this, and today I won. I believe in destiny, and now it’s turning back,” said a happy Sagan after the stage.

“At the beginning we were really happy and celebrating because we thought we had the win. Then, it started to filter through that we hadn’t,” Katusha directeur sportif Jose Acevedo said. “It was disappointing. The organizers were saying Sagan had won and Kristoff was second. We lost by a tiny little margin.

“The team has worked really hard since the beginning of the Tour and right at the end we lost by a few millimeters. That’s cycling, that’s sport, and so we have another chance in Paris and hopefully Kristoff can win on the Champs-Elysees.”

Meanwhile, Chris Froome (Sky) finished safely in the peloton to remain in the race leader’s yellow jersey. Froome continues to hold a 1:47 lead on Bauke Mollema (Trek-Segafredo) and 2:45 on Adam Yates (Orica-BikeExchange), the latter holding onto his white jersey of best young rider.

“I wasn’t actually up at the front those last few kilometers, it was pretty sketchy through all the towns, with lots of road furniture, lefts and rights and obviously over the cobbles,” Froome said. “I was just trying to stay out of trouble and get to the finish as good as possible. I think everyone is quite glad there’s a rest day tomorrow, that was a tough day out there.”

“I think the team’s in fantastic shape. I don’t think we’ve ever been at this point with nine riders left. That’s a great advantage for us. The guys are doing well, the morale is high, and we have the leader’s jersey and a lot to fight for still. We’re looking forward to getting back into the mountains now.”

Tony Martin and Julian Alaphilippe committed to a brave breakaway early on in today’s stage.

From there, Martin and Alaphilippe formed a strong duo on the last Classics-esque stage of the Tour.

The Etixx-Quick Step teammates held a lead of more than six minutes before the midway point of today’s the 206-kilometer stage to Berne.

The peloton took its toll, whittling away the gap. With under 25 kilometers to go, Alaphilippe sat up and was reclaimed by the peloton.

Martin, the yellow jersey bearer on two stages last year before a crash forced him to abandon, held out but he too was overtaken after he made sure to take the only categorized climb of the day.

Inside 20 kilometers Rui Costa (Lampre-Merida) made a solo effort, getting almost 20 seconds on the peloton before being hauled in just after the 5K banner. After a technical cobbles stretch, a big bunch formed up to the line, and Sagan took Kristoff’s wheel then shot around the Norwegian rider.