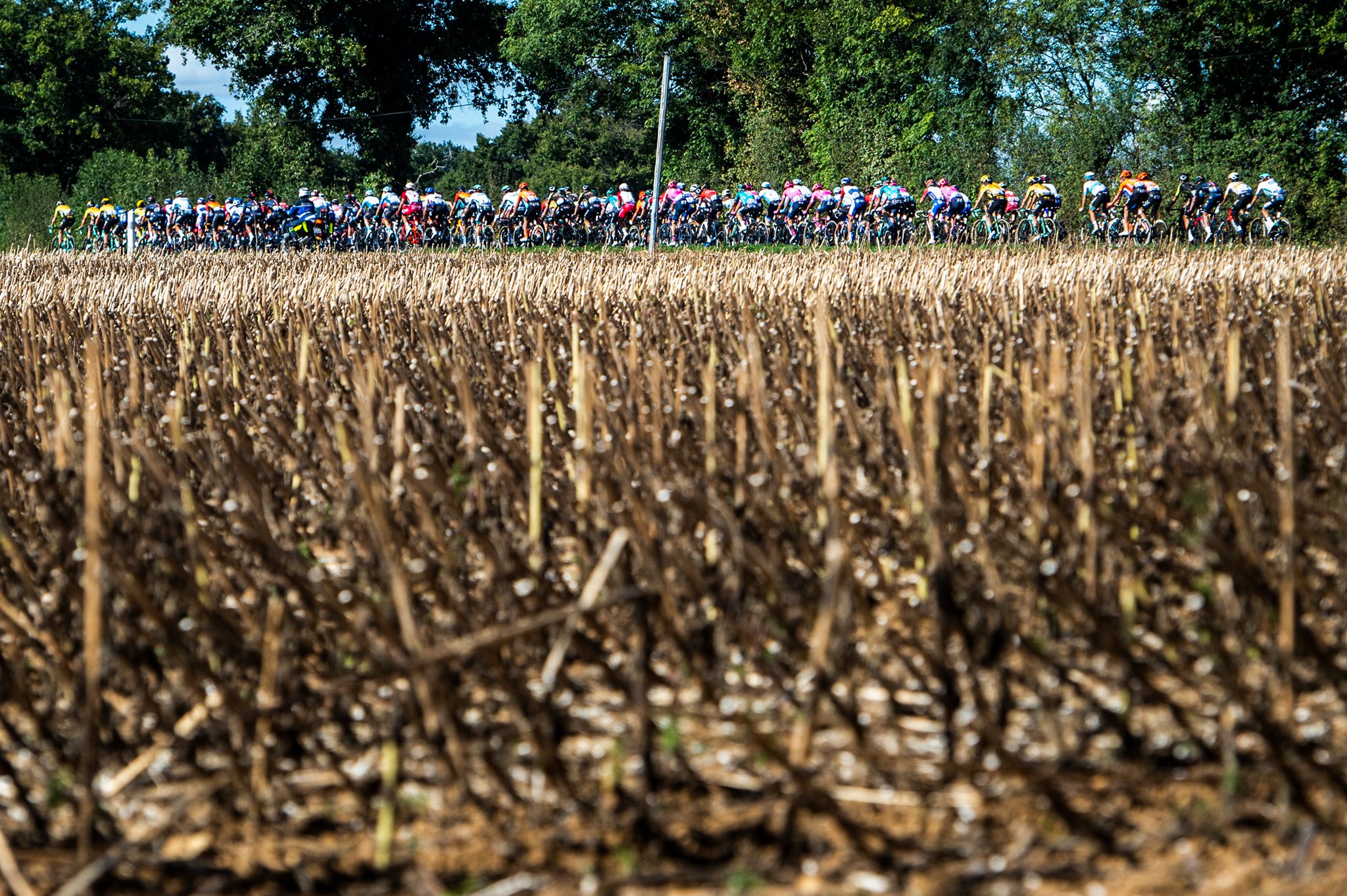 Hirschi made his winning move over the Suc au May, riding the final 25 kilometers alone to seize a solo victory by almost a minute ahead of  his closest rival Pierre Rolland (B&B Hotels-Vital Concept) who finished just ahead of the chase group to take second place, while his teammate Søren Kragh Andersen finished third.“

It’s unbelievable because I was close two times,” said Hirschi in a post-race interview. “I never believed that I could make it because I was really doubtful. I went full-gas until the last 200 meters, and this is super nice, I can’t describe it. It’s hard to put this into words.”

Meanwhile Primož Roglič (Jumbo-Visma) maintained his overall lead after the longest stage of the three-week race and heads into stage 13 with 21 seconds over Egan Bernal (Ineos Grenadiers) and 28 seconds over Guillaume Martin (Cofidis).

The stage played out under a cloudless sky and took the peloton over some rolling terrain into the Correze region of central France. At 218km, it was the only stage of the Tour over 200km and the shortest longest stage ever in Tour history.

After a typically frantic opening stanza, a group of four riders managed to break clear, helped in part by a small touch of wheels in the peloton which held up the likes of Frenchman Guillaume Martin (Cofidis) and Kazakhstan’s Alexey Lutsenko (Astana).

The four leaders – Spaniards Luis León Sánchez (Astana) and Imanol Erviti (Movistar), and Germans Nils Politt (Israel Start-Up Nation) and Max Walscheid (NTT Pro Cycling) – built up a lead of around a minute, but soon had two riders in pursuit after an intense period of acceleration from Peter Sagan’s Bora-Hansgrohe team.

In the sprint, Sam Bennett extended his lead over Sagan in the green jersey standings by two points after eclipsing the Slovakian for seventh place as the peloton came through around two minutes down on the leaders.

A ceasefire ensued as Bora-Hansgrohe came to the front of the pack to keep a check on the break alongside the orange jerseys of CCC Team, working for the Italian Matteo Trentin the the Belgian Olympic champion Greg van Avermaet.

The gap hovered around the two-minute mark as the riders passed through Saint-Léonard-de-Noblat, the hometown of the late Tour legend Raymond Poulidor, with a series of pieces of astonishing field art commemorating the career of the ‘Eternal Second’ of the Tour.

With Bora and CCC refusing to give the break any leeway, the inevitable happened after the first two fourth-category climbs. Asgreen and Erviti were the last two men to give up the ghost as Sunweb sent two riders – Tiesj Benoot and Soren Kragh Andersen – up the road with 50km remaining.

The fast pace had seen Bora successful drop Bennett and all the sprinters – although Sagan, too, felt the pinch on the Cat.2 bonus climb of Suc au May inside the final 30km.

Sunweb’s grip on proceedings became apparent when Swiss tyro Marc Hirschi used his two teammates’ move as a springboard for his own attack, the 21-year-old Tour debutant skipping past  Marc Soler and Germany’s Max Schachmann on the climb.

With Sagan battling back on but the pack looking unlikely to contest the win, Bora put their eggs in the basket of Paris-Nice winner Schachmann, who rode in pursuit with Movistar’s Soler.

Hirschi opened up a 30-second gap over his two chasers and 50 seconds over another group of a dozen riders being driven by the French live-wire Alaphilippe, who joined forces with teammates Bob Jungels and Dries Devenyns in a bid to give QuickStep their third stage win of the race.

But Alaphilippe’s numerous attacks unhinged the chase group which, despite picking up Schachmann and Soler, was unable to make any inroads in its calamitous pursuit of the lone leader. Behind, Jumbo-Visma came to the front to call a ceasefire in the main field and protect their man in yellow after the deficit stretched above the two-minute mark.

Entering the final 20km it was still touch and go for Hirschi, who retained a 50-second gap over his pursuers. But with Kragh Andersen and now Roche present to cover any moves, and no unified chase over the rolling roads, it soon became clear that Sunweb’s efforts were going to pay off.

Hirschi’s victory was just desserts for a rider showing maturity beyond his years and a team that has never ceased to get into the right move and fight for the win – as emphasized by placing three riders in the top 10.

Schachmann took sixth place for Bora-Hansgrohe – scant consolation for the team which had looked to take the stage by the scruff of the neck. Sagan’s thirteenth place saw him pick up a handful of green jersey points and cut rival Bennett’s lead to 66 points but that was a poor return for all the effort made by the former world champion’s teammates.

To compound matters for Bora, their German GC rider Emanuel Buchmann cracked on the approach to Sarran and came home over 10 minutes down on the yellow jersey group – last year’s fourth place rider now dropping out of the top 20. For their part, CCC Team hardly fared any better, with van Avermaet, their best-placed rider, only able to take fourteenth.

The focus shifts from green to yellow and polka dots in Friday’s undulating 191.5km Stage 13 through the Massif Central. Featuring seven categorized climbs, the stage has 36 king of the mountains points on offer and should see a GC showdown on the final climb of Puy Mary.